England's lack of depth at tighthead prop will not damage their scrummaging at Twickenham on Saturday, according to Ireland's Mike Ross.

Head coach Stuart Lancaster has previously admitted England need to usher in the next wave of tightheads, to add cover for frontline duo Dan Cole and Davey Wilson.

Leicester tighthead Cole has a bulging disc in his neck, and may not play again this season, so will certainly miss Saturday's Six Nations clash with Ireland.

Wilson has just returned from injury in the nick of time to solve a potential tighthead shortage, with Sale's Henry Thomas and Harlequins's 22-year-old Will Collier next in line.

England have trialled a number of tightheads in senior and Saxons action without huge success, the likes of Paul Doran-Jones yet to make the grade.

"Their problem is the loss of a few guys to injury, that has taxed their resources a bit"

Former Harlequin Ross admitted surprise England are scratching around for prop depth, but rejected any notion of an easy ride at the set-piece this weekend.

"Their problem is the loss of a few guys to injury, that has taxed their resources a bit, but it is a small bit surprising," said the 34-year-old Leinster tighthead.

"There is a young lad playing at Harlequins, Will Collier, who any time I've seen him I was pretty impressed with him.

"He looks like a good prospect for the future but he is out injured too.

"There is Paul Doran-Jones, he is just back from injury too.

"Around the rest of them, at Northampton you have Salesi Mafu starting ahead of Tom Mercey, so that's not an option.

"You look at Sarries and they have got Matt Stevens who is retired from international rugby.

"They do have 12 clubs around different options although some of those are foreigners starting, others where lads are injured."

Warning Ireland to clamp down on hooker Dylan Hartley's destructive scrummaging, Ross said: "Dan Cole is out and we knew they were not going to have Alex Corbisiero available to them.

"We didn't expect Cole to be missing this weekend but at the same time Wilson came back last weekend just in time, you know.

"And if you look at his form during the autumn internationals he is probably pushing Cole pretty hard.

"So we are not really seeing it as big a loss as it could have been. They are big aggressive boys. I know Joe Marler from Harlequins.

"He was in the academy when I was there and he was always burning the ear off us like a senior front-row for tips and advice.

"Dylan Hartley brings an aggressive edge to it and he's always chirping away in the middle of it, you know, nothing offensive.

"He does talk a fair bit to his front-row and keeps them under control. He really attacks the joint between the tighthead and the hooker to fracture that.

"Once that's done it's open season on you and the loosehead coming across on you." 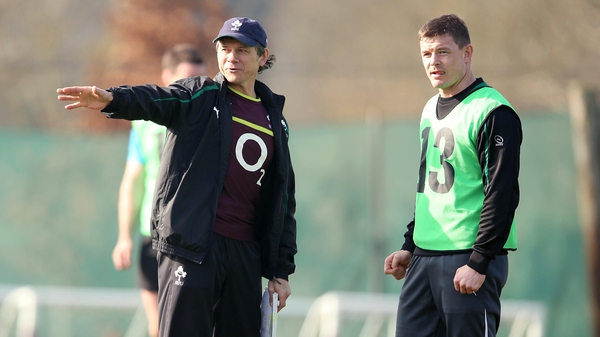