Bonneval's inclusion is one of three changes Saint-Andre has made to the starting lineup that defeated England 26-24 in a thrilling opening game in Paris last weekend.

The 23-year-old, who usually occupies the full-back position for his club, will win his first cap on the left wing at the expense of Maxime Medard, who was omitted from the 23-man squad.

"It's a logical choice following his performances with Stade Francais and from what he has shown us for three weeks in training," Saint-Andre told reporters on Friday.

"He has the pace, the capacity to win one-on-one encounters and we wanted to see him with us. I watched him in a Heineken Cup game between Stade Francais and London Irish... he was outstanding."

Saint-Andre said he had not dropped Medard for a disappointing display against England but needed to gauge his options out wide as Sofiane Guitoune, who made his debut in the November tests, was injured.

"We need to be able to choose from three high-quality wingers. During the November Tests, Maxime played two games, as did Yoann Huget and Sofiane Guitoune," he said.

France’s hero in last week’s last-gasp win over England, Gael Fickou, whose late try allowed the French to seal a 26-24 victory, has to settle for a place on the bench.

In the pack, Yoann Maestri lines up in the second row, replacing Alexandre Flanquart, who drops out of the squad, and Dimitri Szarzewski will start at hooker in place of Benjamin Kayser, who drops to the bench.

Perpignan lock Sebastien Vahaamahina gets a place on the bench.

"Once you have five forwards and three backs on the bench, Vahaamahina gets the nod ahead of Flanquart because he is more powerful and versatile. It's also a question of collective balance," Saint-Andre said.

Out-half Francois Trinh-Duc, who has 48 caps to his name but has not played for France since last year's Six Nations victory over Scotland, also makes it onto the bench against Italy, who opened with a 23-15 defeat to Wales in Cardiff.

Trinh-Duc will act as a replacement for the 22-year-old Jules Plisson, who played all 80 minutes last week on his France debut.

"Jules Plisson showed some good things... but we put three backs on the bench because we saw that it had been tough for Jules to play the whole match," Saint-Andre said. 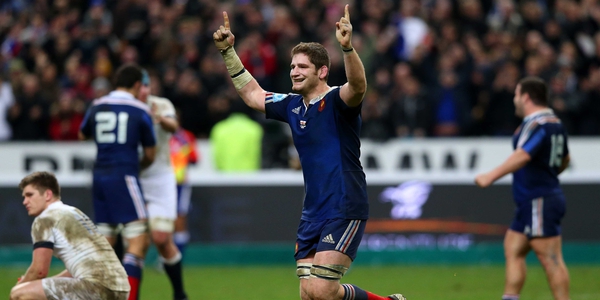