Brian O'Driscoll may have suggested last week the 2013 Six Nations is likely to be his last, but the Ireland centre insisted today his physical condition will be the decider.

With his Leinster contract expiring in the summer, the decorated 34-year-old's future has been a source of ongoing speculation with the summer Lions tour to Australia offering a potentially fairytale conclusion.

A starring role in Saturday's 30-22 victory over Wales, however, dispelled any notion of decline as he brilliantly set up one try, scored another and displayed trademark steel in defence.

Fitness has become his greatest concern as although he has fully recovered from the ankle surgery that forced him to miss the autumn, 14 years at the front line of Test rugby have taken their toll.

When asked about his retirement in the build-up to Wales, he gave the most definitive answer yet that he was participating in his last Six Nations, but today he revealed the decision remains open.

"I said it because I was asked the question. I hadn't intended causing a stir, I was just being honest in answering a question," he said.

"I haven't really allowed myself to think about it. If you start thinking about retirement in six months time you're already there.

"I just want to concentrate on my rugby and enjoy it and live in the moment. It will all evolve. The situation will unfold. I'll have to listen to my body.

"I'll talk to my wife for her point of view - there are lots of factors, not just me, that come into those decisions.

"I haven't been wondering if Saturday will be the last time I'll play England in the Aviva Stadium, far from it.

"Winning man of the match against Wales doesn't have a bearing. It's a nice reminder that it's still there.

"But with regards to the decision-making process, because I'm not thinking about it, it hasn't altered my thinking.

"Maybe when the time comes I'll look back in previous performances, but a huge amount of it is about listening to your body.

"Games like last weekend take a long time to recover from when you're a little bit older."

"It's the cumulative effect as well. If you're lucky enough to play five Six Nations games in seven weeks that has a huge knock on effect. I'm at game two, feeling okay and looking forward to England."

For the first time since 2003 Ireland have entered the Six Nations without O'Driscoll at the helm following coach Declan Kidney's decision to give Jamie Heaslip the captaincy.

The move polarised opinion with some claiming it would enable O'Driscoll to concentrate on himself in a Lions year, but the Leinster centre disagrees.

"I don't think not being captain has made much difference," he said.

"I've read a little bit of stuff over the last while that taking the burden of captaincy away from me has allowed me to think about my game.

"I'd like think that in the 10 years I was captain I played a few all right games as well.

"It hasn't changed the way I go about my business or the way I carry on around camp.

"I still say things when they need to be said. I give a little bit of insight if I feel I can, or simply commend the young lads if they do something good.

"I suppose I thought at some point the captaincy would be passed on, but looking forward I'm not going to be around for the 2015 World Cup, so it's a good opportunity to gave Jamie a run in it.

"Jamie's going to be around for a considerable amount of time, albeit that didn't make the decision any easier or lessen the disappointment when I was told."

England visit Dublin on Sunday in a potential Six Nations decider and O'Driscoll, who has won his last seven games against the Red Rose, is relishing the prospect.

"They're great games against England. The country's non-rugby fans probably pay more attention to England matches because of the history between the countries," he said.

"They're great occasions, largely because invariably England are one of the best sides in the world.

"You have to bring your 'A' game. It's England in Dublin and that's an exciting prospect no matter how many times you've had it." 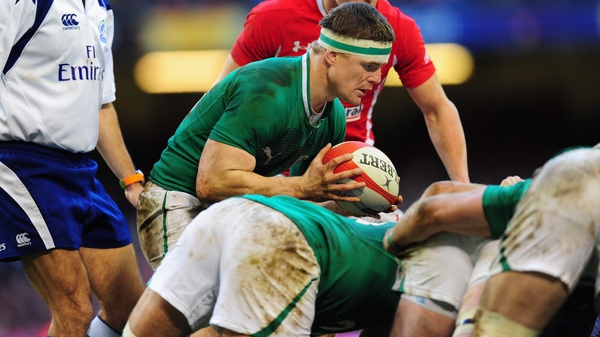