Sunday sees the latest instalment in one of the great rivalries in European club rugby as Munster and Toulouse do battle in the first round of the Heineken Champions Cup (Live on RTÉ2/Player).

Despite the freezing temperatures, Thomond Park will be packed to the rafters for the ninth meeting between these two heavyweights – and third in as many seasons.

This is normally a rivalry for the knockout stages, with the only previous pool-stage match coming back in 1996 when the tournament was in its infancy.

Here's how that rivalry has ebbed and flowed over the decades…

Mick Galwey tried to rally his Munster team-mates as another conversion sailed between the posts but it failed to have the desired effect as they suffered what remains their heaviest defeat.

The Irish provinces were still getting to grips with professionalism when Munster travelled to face the defending champions in the second season of the Heineken Cup. They had won two of their first three pool fixtures, including a 27-point win over Wasps in round three, and knew a result in France would clinch a first quarter-final appearance.

"We knew we had a good chance. We believed in ourselves."

Peter Clohessy and the Munster players fancied their chances of an upset in Bordeaux, despite Toulouse entering the game as overwhelming favourites.

Munster found themselves 18-17 down midway through the second half, and with Mike Mullins in the sin bin, but the 14 men kept Toulouse at bay and then rallied when restored to their full compliment.

Ronan O’Gara scored one the great Munster tries, a brilliant free-flowing move that began on their own 22, and Jason Holland’s intercept try put them on course for their first final appearance.

Munster arrived in Toulouse determined to bully their hosts up front and their old-fashioned 10-man approach almost worked.

They led until the 74th minute thanks to 12 points from the boot of O’Gara, but Frederic Michalak’s try snatched victory for Toulouse, who four weeks later lifted the trophy for the second time after defeating Perpignan in Dublin.

"To win this trophy once is special, but twice is a dream."

Declan Kidney won a Heineken Cup in his first season back at Munster, and it became two in three years on the most memorable of days at the Millennium Stadium.

Munster or Toulouse had featured in five of the previous six finals and the French side’s start in Cardiff suggested a fourth title was on the cards.

However, Munster survived an early onslaught and took the lead on 33 minutes when Denis Leamy barged over from close range.

Toulouse drew level after half-time but Ronan O’Gara’s 64th-minute penalty, his third of the game, put them back in front.

What followed was brilliant ball retention by Munster as they starved Toulouse of attacking opportunities to clinch victory in front of a sea of red in Cardiff.

"Munster taught us a lesson. They were outstanding. We tried to play all the ball but we exposed ourselves."

Guy Noves could only watch on as his Toulouse side were ripped apart by a rampant Munster at Thomond Park.

A close first half was followed by a one-sided second as Munster ran in five tries after the restart.

Keith Earls’ early try ensured they led 13-9 at the break and they repeated the trick in second half as Dave Kilcoyne and CJ Stander both crossed in a blistering four-minute period.

Further tries from Casey Laulala, Simon Zebo and Paul O’Connell sealed a landslide victory in what was one of the brightest days of the Rob Penney era.

"It wasn't perfect, but it is a win against a world-class team, so we are fairly happy."

Only eventual finalists Saracens had scored more tries than Munster during the pool stages and they powered clear in the second half to clinch a 12th semi-final appearance.

A four-point interval lead courtesy of John Ryan’s try was quickly extended to 15, with CJ Stander crossing within seven minutes of the restart.

"We gave it our best short and we literally came up short by one try."

Johan van Graan was proud of his battling side after Munster’s quarter-final hopes were ended at an empty Thomond Park.

Munster had claimed impressive victories over Harlequins and Clermont Auvergne before the pool stages were halted due to Covid-19 restrictions, and they picked up where they left off, surviving Chris Farrell’s sin-binning before Keith Earls crossed twice in three minutes.

Three Romain Ntamack penalties left Toulouse seven down at half-time and they were level when the out-half’s deft kick was finished by Matthis Lebel.

Gavin Coombes put Munster back in front but it was to be short-lived. Julien Marchand and an Antoine Dupont double booked Toulouse’s place in the last four, and they would go on to lift the trophy for a record fifth time.

"If ever there's a day to sum up Munster rugby, it's today. A community of 40,000 people travelling."

Johann van Graan had always done a good job of keeping his emotions in check while in charge of Munster, but even he was holding back the tears after the cruellest of defeats at the Aviva Stadium.

Munster went toe to toe with the defending champions and the sides could not be separated after 100 minutes of drama.

It came down to place-kicking, just the second shootout in the Champions Cup history. And it ended in further heartbreak for Munster as Conor Murray and Ben Healy missed shots at goal.

They had led by 10 points with 20 minutes remaining but Toulouse responded with a second Matthis Lebel try and a late Thomas Ramos penalty.

A flurry of missed drop-goals in extra-time saw the game go to a shootout, where Healy’s second miss settled an extraordinary contest.

Follow Munster v Toulouse live on RTÉ and RTÉ Player on Sunday from 2.30pm and keep updated via our live blog on rte.ie/sport or on the RTÉ News app. 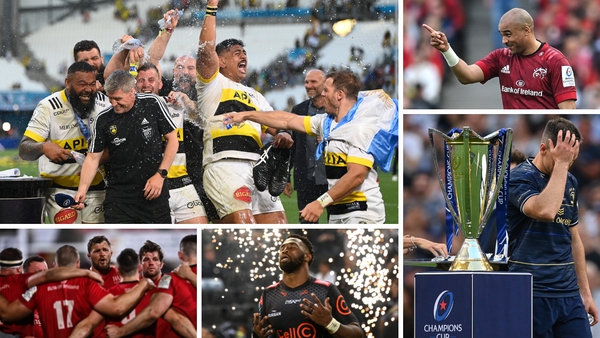