It might not be bigger, but there's every chance it will be better.

The 2022/23 Heineken Champions Cup is up and running. On these shores, at least, it always hits different.

"There's a special feeling around Europe," Munster's Tadhg Beirne said this week. Even as the temperatures drop, things heat up when the Champions Cup is in town.

Beirne's mention of Europe was a force of habit, but this is no longer the preserve of the northern hemisphere.

The South Africans have arrived, with the Bulls, Sharks and Stormers bringing a new dimension to this season's competition; more travel, contrasting climates, and - in the case of the Bulls - altitude. They'll bring some decent players too.

Their introduction has proven controversial, mainly in England and France, with the Irish, Welsh and Scottish audiences already well-versed with the South African franchises from the Pro14 and more recently URC.

The main sticking point, it seems, is that the European Cup now contains teams that aren't in Europe. Antoine Dupont is one of those who doesn't seem to be a fan.

"For purists, it's a bit difficult to grasp," the Toulouse captain said ahead of his side's visit to Thomond Park this Sunday.

"Our whole generation has known the legendary European Cup. It’s a new competition now. It’s no longer the European Cup."

It's worth noting that for Toulouse, at least, the pool stage will be just as they've known it, with the five-time winners taking on Munster and Sale Sharks, both very much in Europe (if not the European Union). One would hope he hasn't confused the Sale Sharks with their Durban namesakes.

It may no longer be the European Cup, but does that really matter? When the Heineken Cup caught fire in Ireland in the early 2000s, it was down to the quality of the product, rather than any blind loyalty to a continent.

Whatever about the format, the rugby should be good. A season and a half into the South African arrival to the URC, it's undeniable that they have improved the quality of the league, and there's little to suggest that won't translate to the Champions Cup.

If there is an issue with the competition, it's the format of the pool stage, which has fallen victim to the twin issues of having more teams and less time.

Now in its third season, the format sees the 24 teams split into two large pools of 12, with each team assigned two opponents who they will face on a home and away basis, the top eight teams in each pool advancing to the Round of 16.

It has its critics for being convoluted, and while it's actually relatively straightforward, it's a backwards step from the six-game pool stages we saw prior to the pandemic.

With 16 of the 24 teams advancing to the knockout stage, it lacks the jeopardy of the previous format, where a second-place finish in the pool didn't even guarantee a place in the quarter-finals, although in the interest of balance that version wasn't without its flaws, where some teams threw in the towel after a couple of early defeats.

Starting the tournament in December rather than October has also consigned the traditional pre-Christmas back-to-back fixtures to history, those games having brought a unique dynamic to the pool stages, and created some brilliant mid-season rivalries.

Covid-19 has arguably chilled the feelings towards this format too. Both previous runnings were heavily disrupted by the pandemic, with the pool stage ultimately abandoned halfway through the 2020/21 season, while almost every team in last season's competition found themselves effected by cancellations, or outbreaks of the virus in their squad. It was chaos.

Whatever about the format, the rugby should be good. A season and a half into the South African arrival to the URC, it's undeniable that they have improved the quality of the league, and there's little to suggest that won't translate to the Champions Cup.

On Thursday the Cell C Sharks showed their hand for their opener with Harlequins in Durban today, with Springboks Ox Nche, Bongi Mbonambi, Eben Etzebeth, Siya Kolisi, Jaden Hendrikse and Makazole Mapimpi all included. If the jury is out on whether they will be a decent addition to the competition, you probably won't have to wait long for a verdict.

Neither the Sharks, Bulls nor Stormers are among the favourites for the title with the bookmakers, in spite of how well they got to grips with the URC last season, with Leinster once again favourites alongside a familiar group of contenders.

Munster and Ulster are in the bloated middle tier; not obvious contenders, but will expect themselves to be involved in the knockout stages.

With the final being at the Aviva Stadium, it's an enormous carrot for Leo Cullen's side to chase, particularly if they can get off to a fast start, and earn a high seeding in the knockout stages.

Last season they looked unstoppable en route to the final, and their total of 364 points was just 14 off the all-time record set by Stade Francais in 2001. Had they not had to forfeit a pool game due to a Covid-19 outbreak, they'd likely have broken the record.

But while they averaged six tries and 49 points in their games leading up to the final, they were held tryless by a La Rochelle masterclass in the Marseille decider.

With Racing 92 and Gloucester to contend with in the pool stages, they're unlikely to threaten those averages this season, but they're likely to be in the mix at the business end of the season.

Ronan O'Gara's La Rochelle are unsurprisingly among the favourites again, as well as the regulars like Racing, Toulouse and Saracens.

Munster and Ulster are in the bloated middle tier; not obvious contenders, but will expect themselves to be involved in the knockout stages.

Graham Rowntree's side come face to face with Toulouse on the opening weekend, the French side having knocked them out in each of the last two seasons. Even with a daunting trip to Stade Ernest Wallon in January, there will be a huge target on their games against Northampton Saints in Rounds 2 and 3. A pair of wins could even be enough to advance to the Round of 16.

For Ulster, the draw hasn't been kind. Dan McFarland's side, with La Rochelle and Sale their opponents, starting with a trip to the Premiership side on Sunday. Sale don't exactly have a stellar European pedigree, quarter-finalists in each of the last two seasons, but Alex Sanderson's side have been strong this season in the Premiership, with seven wins from nine games leaving them second in the table behind Saracens.

An opening win would leave them in a strong position, particularly with their two home games to come, but it remains to be seen how easily they can pick themselves up off the ground after last week's chastening defeat to Leinster. 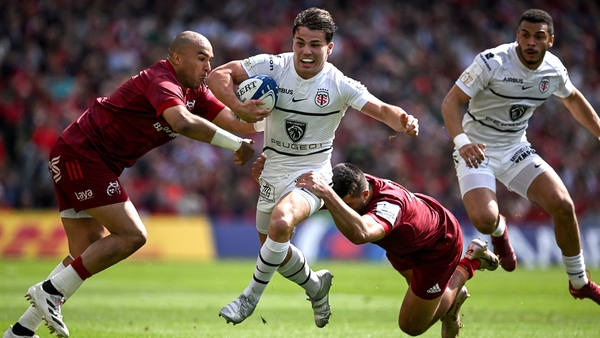 Champions Cup Round 1: All You Need to Know