After Covid-19 caused upheaval in the last two pool stages of the Heineken Champions Cup, here's hoping we get a clean run through this time around.

The current format is a continuation of the revamped competition we've had over the last two seasons, with 24 teams - eight from each of the big three leagues - split across two large groups of 12, with each side assigned two opponents from the pool, who they'll each play home and away across four rounds.

The top eight from each advance to the round of 16 which will be played following the Six Nations, the key difference this season being that the last 16 will be one knockout game, rather than the two-legged affair which seemed to be a welcome addition in last season's competition.

The other big difference is the addition of the South African franchises. And while they are no longer a mystery to the URC sides, they're a novelty to the French and English.

The Irish interest is three teams rather than four, Connacht dropping down to the Challenge Cup after they failed to qualify last season.

Leinster find themselves in Pool A, and while they will once again be among the favourites for the competition, there is very little margin for error if they want home advantage in the knockout stages. They face Racing 92 in their first and last games of the pool, with two games against a strong Gloucester sandwiched in between.

Munster and Ulster are both in Pool B and while both have tough assignments, they'll still fancy their chances of making it to the last 16 at least.

Munster will put themselves in a strong position to qualify if they can open up with a win against Toulouse on Sunday, before travelling to Northampton Saints next week, while Ulster are away to Sale Sharks - second in the Premiership - first up, before welcoming defending champions La Rochelle to Belfast in Round 2.

TV
Munster v Toulouse is live on RTÉ2 and RTÉ Player, with coverage beginning at 2.30pm on Sunday. All other games will be live on BT Sport, including Racing 92 v Leinster and Sale Sharks.

ONLINE
RTE.ie/sport will have live scoring across the weekend with match reports and reaction from the grounds.

Leinster and Racing 92 are set for the most challenging conditions of the week, with rain expected in Le Havre and temperatures of around 5C. It's likely to be even colder in Galway on Saturday evening where Connacht host Newcastle in the Challenge Cup, although thankfully there isn't rain forecast.

Sunday's games in Salford and Limerick will have good conditions, with no rain and very little wind. However, fans heading to Thomond Park will need to wrap up, with temperatures set to drop to just above freezing.

Five and a half months on from their shattering final defeat in Marseille, Leinster begin their latest quest for a fifth star back on French soil, taking on perennial challengers Racing 92.

The Parisians have given up home advantage for this game due to a concert taking place at the La Defense Arena, moving north to Le Havre.

This is just the fourth meeting of the sides, and the first since the 2018 final in Bilbao, with Leinster winning all three of the previous clashes.

Both teams come into the game in impressive form, with Leinster winning all nine of their games this season in the URC, while Racing are on a five-game winning run in the Top14.

Crucially, Leo Cullen's side are without both Johnny Sexton and Tadhg Furlong, while Racing boast a star-studded line-up, including Finn Russell, Gael Fickou and Cameron Woki.

It also provides an interesting narrative, with Leinster senior coach Stuart Lancaster set to take over the French side next season.

After last week's disappointing collapse against Leinster, Ulster will have to sharpen the minds fast ahead of a tough away trip to open their Champions Cup campaign.

Dan McFarland's side have probably underachieved in Europe in recent seasons, missing out on the knockout stages in 2021 - albeit with Covid-19 effecting the pool stage - before their last-16 exit to Toulouse last season.

Sale have been to the quarter-finals in each of the last two seasons, and Alex Sanderson's side have made a strong start to this season, currently sitting second in the Gallagher Premiership table.

John Cooney and Iain Henderson both miss out for Ulster this week after suffering brain injuries in last week's defeat to Leinster, while England internationals Manu Tuilagi, Tom Curry, Jonny Hill and Bevan Rodd all start for the English side.

If the last two meetings of these sides are anything to go by, Sunday's meeting at Thomond Park will be required viewing.

Toulouse ended Munster's last two European campaigns, but this time they open their journey against the four-time champions.

Just five of Sunday's starting team also started the quarter-final defeat at the Aviva Stadium in May, while only 12 of the matchday squad were involved that afternoon.

Toulouse - top of the Top14 - are led by their electric double-team of Dupont and Ntamack in the half-backs, while they also have World Rugby Breakthrough Player of the Year Ange Capuozzo on the wing for his Champions Cup debut.

This is one of the great European rivalries - between them they've played 377 games in this competition and won seven titles, their eight previous meetings are split four apiece (if you count last season's 24-24 quarter-final draw towards the eventual winners Toulouse).

Andy Friend's side find themselves in the Challenge Cup this season for the first time since 2018/19, and based on their team selection for Round 1, their priority this season is on the URC.

Bundee Aki, Mack Hansen, Jack Carty and Finlay Bealham are among those rested for the Round 1 visit of Newcastle.

It's a sixth meeting of these two sides in the Challenge Cup, their last encounters coming in the 2015/16 season, where they shared home and away wins, Connacht 25-10 victors at the Sportsground.

Adam Byrne makes his first start for the province on the wing, while Ballinsaloe flanker Oisín McCormack will make his Connacht debut if introduced from the bench. 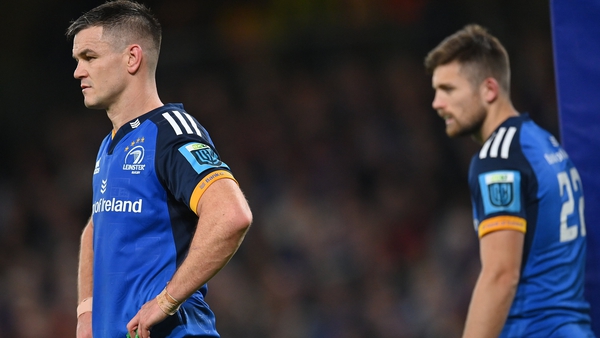