Ireland finished off a successful Autumn series against a very dogged and physically confrontational Australian side. Yet the victory was once again, unfortunately, marred with talk of concussion in rugby and the alleged mismanagement of Nic White.

I look at concussion a lot differently now than what I did as a player. You'll hear many ex-professionals speaking about their own personal experiences with concussion.

Some speak to it as a badge of bravado to explain how the game is gone soft and how it went in their day. Others speak about their increased levels of respect for the HIA and concussion protocols because as time goes on we learn more and more about how repeated trauma can affect your life during or after rugby.

I’ve had some concussions. One as an 18-year-old, knocked out cold from a non-malicious tackle but a sobering experience quite early in my career. There was no arguing with that, three weeks on the sideline as a standard protocol and back without much of a reintroduction.

I felt fine, I was allowed back to training and ironically I don’t remember much more of a fuss being made afterwards.

I had a second properly diagnosed concussion as a professional player, and for one reason or another I don’t recall when or where it happened, I just remember the return to play protocol, failing it a handful of times, seeing a specialist and pulling through okay after five weeks.

Luckily, there was nothing major going on and I returned without any issues after an extended period of rest. I was that bit older for this concussion and it made me respect the process a lot more.

I had felt the side-effects of not being able to just shrug off the symptoms. Lingering headaches during any intense conversation and the first step of the six-day return-to-play protocol was failed a few times before I was able to get back properly. This was a meaningful step along the way to adhering to all concussion protocols as a player and a coach.

I had a few undiagnosed head knocks in between. I definitely flagged one of them while on the pitch and was ignored, asked to play on when complaining of blurred vision and an inability to see the ball properly. This was not in a professional environment and I hold no grudges about it. Our understanding was way different more than a decade ago and luckily I haven’t had any issues since retirement.

However, at the time it was a cry for help. A cry for someone else to call it for me and to take me off. I wasn’t going to wave the white flag myself but I tried my best to give all the information to make the substitution and I wasn’t helped. Nowadays, if I felt the same symptoms, I would like to think that I’d be strong enough to take a stand and remove myself from the pitch with more certainty and authority.

This isn’t to take a run through my own medical history or for anyone to guess who I feel was at fault at any stage during the return-to-play protocols. It’s more to showcase the difference between then and now.

Those situations happened to almost every player, I’m certain of that. We have excuses that we didn’t know the effects and we know much more now. Almost like smoking, we didn’t know how harmful it was before, but we now know it is detrimental to our health without discussion.

When you are a professional player, you do what’s called a SCAT test in your training centre, or at least that’s how it was done when I was still playing. The SCAT test had to be done before every season to get your baseline function on reactive tests on a computer in a quiet room. You would press two buttons on a keyboard if certain images, numbers or words popped up on the screen.

There were also recall tests for obvious reasons. Some of these tests were repeated during the dressing room HIA test when you were removed from the pitch. I did that test too after naively trying to tackle Bundee Aki in the Sportsground.

I remember sitting down to do the SCAT test in pre-season and thinking, 'maybe I can score a little bit poorly here and if I do have some symptoms of concussion, I won’t be ruled out because I’ll be able to achieve my [inaccurate] baseline score easily enough.’

Luckily, I had some run-ins with concussion before this and the guilt took over. I wouldn’t be able for that level of dishonesty and I couldn’t follow through with it. There’s also an element of competitive nature. I didn’t want to score poorly in any test, even if I was only competing with myself, with or without brain injury.

Unfortunately, what we saw in the Ireland-Australia game was White being dazed and imbalanced after two contacts to the head in quick succession. He was pulled off to do a HIA after the referee and doctor both saw him stumble.

The question here is should he even have been allowed to go for a HIA? The guidelines put forward by World Rugby state that any imbalance or dazed nature warrant permanent and immediate removal from the pitch. Do not do a HIA, do not return to the pitch.

So why is White adamant that he passed the test and everything is fine if the guidelines show that he should never have gotten to that point?

If I was a player now, having gone through previous concussions, and knowing what we know now, would I have removed myself from the pitch after being rocked off balance like that? I’m not sure, but I do hope I would have the strength and bigger picture vision to see how wrong it is.

The other side to this is that Test-level careers are short, some of us don’t ever even get there. You risk losing your place the minute you give someone else the jersey. If you stand yourself down every time you feel a small knock, will it eventually become the story of the boy that cried wolf and coaches will be sick of dealing with it?

In my own coaching capacity now I do not take concussion lightly. I have been through what these club players are experiencing and I will not put them at the same risk that I was facing. Err on the side of caution, take it out of the players hands, tell them it’s a three-week return-to-play protocol at amateur level and do not leave room for argument. Of course, this is after looking at footage to see what happened and speaking to my medical team. I won’t go around calling concussions without any information and without the relevant qualification.

Some concussions are straightforward and players know the story. Some knocks don’t result in concussion at all and there’s no need for me to get involved. However, where there’s any ambiguity, I am happy to step in and just say ‘no’. Back the medical staff to be overly cautious, take any decision out of a player’s hands because they won’t make an accurate assessment, and at the end of the day, I have to protect myself as a coach too.

The aim is to keep people out of danger, not to put them at further risk. It’s bigger than sport, it’s the rest of your life. 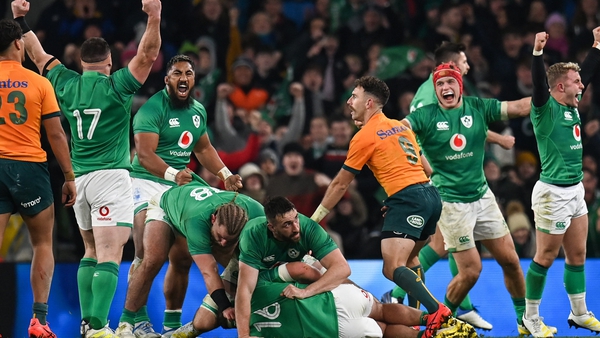