Crowley was handed his maiden Test start for Ireland at the 11th hour for Saturday's nervy 13-10 win over Australia after captain Johnny Sexton suffered a calf injury ahead of kick-off.

The 22-year-old lined up at the Aviva Stadium with just 20 senior appearances in professional rugby under his belt for Munster and having only made his Ireland debut a week earlier by coming off the bench against Fiji.

He calmly slotted a penalty and converted Bundee Aki's try at the Aviva Stadium, before replacement Ross Byrne secured victory by landing the decisive three points late on.

Flanker O'Mahony, who captained Ireland in the absence of Sexton, has been impressed with the attitude of his Munster team-mate and had no doubts about him stepping in.

"Look, we were all conscious that we wanted to make him feel a million dollars and sometimes that's just a little squeeze on the arm or a pat on the back and he knows then that you're there," said O'Mahony.

"The most important thing is your actions from a group, from a forward pack or from a leadership group.

"They probably weren't always up to scratch but we always had his best interests at heart, definitely (on Saturday).

"It was a big ask for a young man to come in and play 70 minutes against a team as good as that, and then to come out on top.

"It's easy to see he is a good kid, he is hungry to learn, he is hugely ambitious, he has no fear of asking questions or saying the wrong thing.

"It's refreshing to see someone that age getting stuck in and enjoying it and putting a performance like that in. It's great for him." 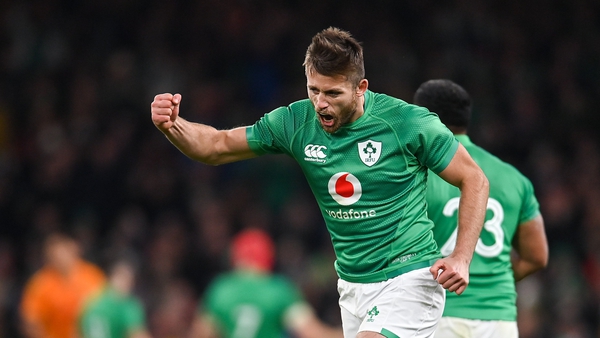