A memorable year ends with the most forgettable of wins.

If there was any danger of Ireland getting complacent, this game will have woken them up like a bucket of cold water.

The only real positive to speak of was the win. The final score of 13-10 didn't even look too pretty.

But for Ross Byrne’s redemption, there would have been little to smile about, the Leinster out-half landing the winning penalty from out on the right touchline with five minutes to play, having been called into the match-day squad just before kick-off.

Ireland’s preparations were hit in the warm-up, captain Johnny Sexton withdrawing due to injury, and Jack Crowley thrown into the deep end.

The Munster out-half handled himself well, but Ireland’s struggles were largely at the breakdown, where they traded penalties back and forth with the Aussies in a sloppy 80 minutes.

By the 55th minute, there had been just three points, Crowley’s first half penalty all that separated the sides.

When Bundee Aki barreled his way over to score the opening try 15 minutes from time, it looked like they had found another gear against a dogged Australian side.

But Jordan Petaia hit back with a Wallaby try instantly, and heading into the final 10 minutes it was 10-10. At the very least the punters would get some late drama.

Four minutes from time it finally arrived. Byrne, whose last Irish cap came in March 2021 found himself standing over a penalty, and the out-half was the unlikely hero. 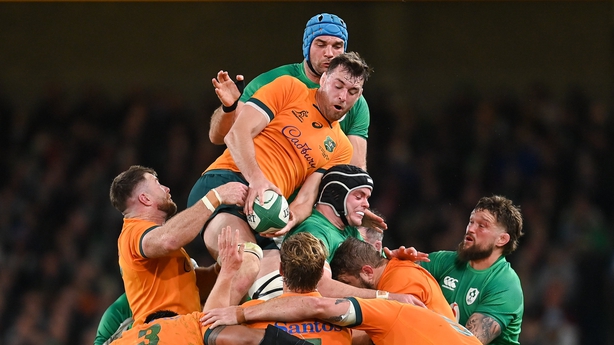 On a real wintery night, Ireland started cold, and very nearly found themselves trailing inside three minutes. After a dropped ball by Gibson-Park and an early shove at the scrum, it ended when Nic White ran through a gaping hole at the side of a ruck to score.

However, Ireland were blessed to see the try wiped out after a TMO check, a needless neck-roll by Wallaby hooker David Porecki in the build-up seeing the hosts survive.

When Ireland finally got the ball moving, the looked sharp. Crowley looked to make a statement by carrying hard into contact, back up by a huge cheer from the crowd.

On nine minutes, the out-half had a nice settler to the right of the posts, easing it through for a 3-0 Irish lead.

He was looking full of confidence, intercepting an overthrown lineout moments later to put Ireland back on the attack.

Both sides' were poor in discipline though, Australia giving up four penalties in the first 10 minutes, while Beirne and O’Mahony handed two back the other way. 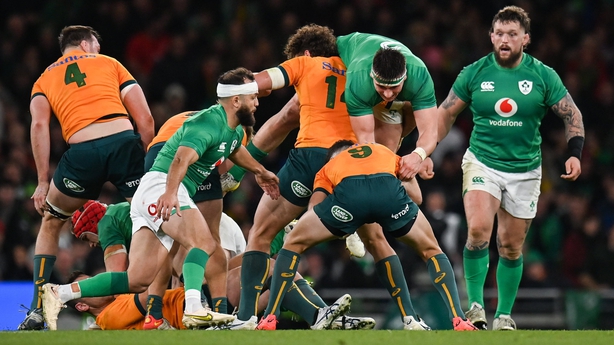 When Caelan Doris ran offside on 19 minutes, it gave Bernard Foley the chance to level the scores, but the out-half fluffed his kick well wide to the right of the posts.

From the restart, Ireland infringed again, this time Ringrose, and had Mark Nawaqanitawase’s offload not dropped the ground, Australia could well have got the game’s first try.

The Wallabies were controlling the game, putting together 21 phases back-to-back on the fringe of the Irish 22. But they continued to be indisciplined at the ruck, referee Ben O’Keeffe pinging them for a third neck-roll on 26 minutes.

The New Zealander had been whistle-happy in the opening half, although both sides were giving him reason to be, sharing 10 penalties in an incredibly frustrating 30 minutes of rugby.

The Wallabies were playing all of the rugby, but Dave Rennie’s side were incredibly wasteful.

In 36 minutes, Australia had made six visits to the 22 and left without points each time, the last of those seeing Folau Fainga’a sent to the sinbin for yet another neck-roll, the fourth time in the game they’d been caught for such an offence. 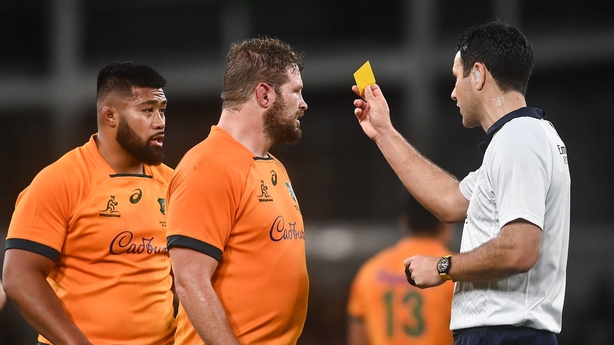 With three minutes left in the half, Ireland went on the offensive, and after big carries from McCloskey and Doris, they picked up another penalty in a kickable position. Turning down the shot at goal, Crowley went for the corner, and a lineout five metres from the line.

They went back to that near-side maul that saw Van der Flier cross for his try against the Springboks, but Australia were wise to it and stopped Sheehan just short of the tryline, and after Gibson-Park strayed onto the touchline at the resulting ruck, it allowed the visitors hold out, 3-0 behind having dominated territory and possession.

Against South Africa, Ireland hit two tries in the first 10 minutes after the break, and after a turgid first 40 here, they needed a fast start.

The intent looked there early on, moving the ball through the hands far more willingly, but the final execution wasn't enough to break down Australia, Michael Hooper coming up with a trademark breakdown steal, and a forward pass halting the first two real Irish attacks.

On 46 minutes, Ireland thought they were in.

With scrums uncontested due to Fainga’a’s yellow card, and an earlier injury to Porecki, Ireland used the set-piece for quick attacking ball, Gibson-Park's darting pass to Hansen sending him sprinting for the line. 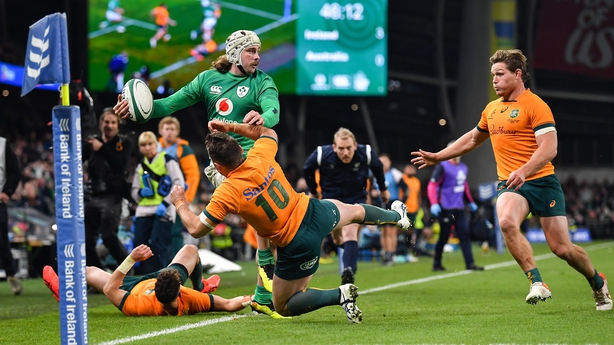 The wing came close on his own, before flicking an offload back to his scrum-half who ran in to score, or so he thought, replays showing Australia had forced Hansen into touch just at the right moment.

Having just returned to 15 players, Australia were lucky not to pick up another yellow card, Rob Valetini’s upright tackle making contact with the head of Sheehan, but the offence was deemed worthy of just a penalty.

Ireland went back to the corner, but this time it was their turn to be wasteful in the 22, penalised for coming in the side after the Wallabies did well to slow down their ruck.

On 50 minutes, the considerable size of Taniela Tupou and Will Skelton were summoned from the Australian bench, and they made their mark on the tight side of the scrum instantly, winning a powerful penalty on the edge of the Irish 22.

Having missed from a similar position in the opening half, Foley’s radar was working again, as he slotted the kick to bring the sides level at 3-3.

For Tupou, it was an unfortunately short appearance. One phase after that dominant scrum, the Tongan Thor’s knee buckled beneath him as he caught the ball, carted off the pitch with what looks like a potentially serious injury. 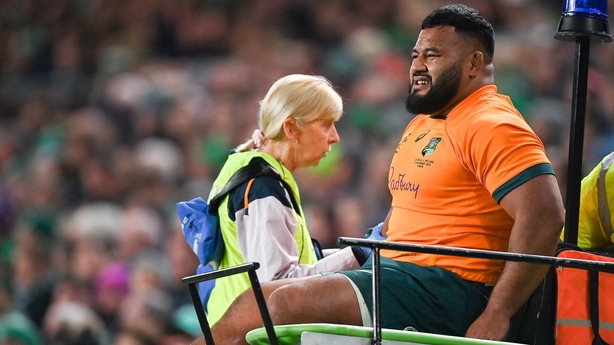 After their strong 10 minutes early in the second half, Ireland fell back into old ways. Hansen and Keenan both spilled high balls as they struggled to put together any real phases against an Australia side that looked hungrier at the breakdown.

But when Ringrose was tackled in the air on 64 minutes, it gave Ireland a soft entry to the 22, and finally they made it count.

Doris charged off the back of the lineout and bounced Foley back for a monstrous gain, and with penalty advantage coming for yet another neck-roll, substitutes Casey and Aki combined to send the centre crashing over for the first try of the game.

Crowley’s conversion pushed the advantage out even further, Ireland moving 10-3 in front with just over 13 minutes left to play.

It was a short-lived lead. With Sheehan penalised, Australia went back on the attack, and after Skelton shook off a handful of tackle attempts to bundle his way into the 22, Ireland infringed again. 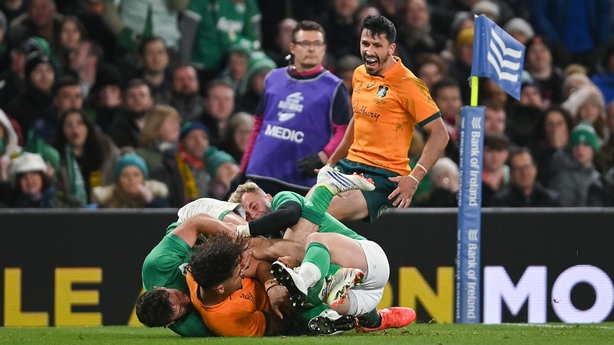 With an advantage their way, Australia moved it wide, Petaia finding the gap in the stretched defence to dive over, as Foley converted to make it 10-10.

In the final 10 minutes it was now win at all costs territory, and the scrum gave Ireland the chance to nudge ahead.

On 75 minutes Ireland won a penalty at the set-piece, and Byrne, on as a replacement for Crowley, showed enormous bottle to float the kick between the posts, from close to the right touchline.

With 90 seconds remaining, Ireland found themselves five meters from their own line defending an Australian lineout, but in a game defined by poor discipline, it was only appropriate the Wallabies would blow it, going offside at their own maul, Ireland holding out for victory.

In a year where Ireland beat New Zealand, South Africa and now Australia, there remains work to be done in 2023. 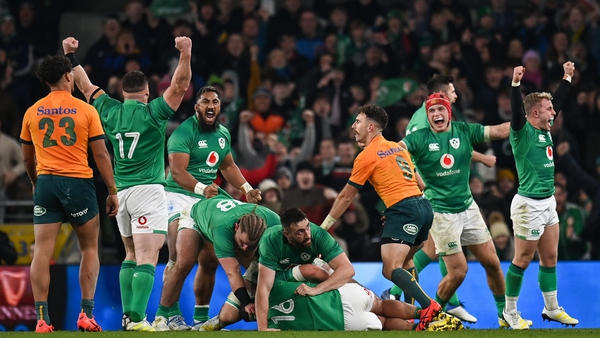