"A high degree of danger" and "high level of force" are two phrases that we don't like to hear during any rugby match. Unfortunately, we heard it again last weekend as Bundee Aki got his approach to the ruck dangerously wrong.

The World Rugby laws are clear and have focused on head contacts because head injuries and previous head trauma are some of the main dangers in the game and reasons for increased negative attention on the game of rugby union.

Almost three-quarters (72%) of all head injuries happen around the tackle area, which is why World Rugby are seeking a safer game. Now that we know more about the long-lasting effects of concussion, the game needs to be more controlled.

There are currently ongoing legal cases with ex-players and World Rugby. To ignore the current instances of head trauma would be wholly irresponsible.

The current head contact process asks the question as to whether head contact has occurred. In this instance, Aki connected with the head of Seabelo Senatla as the Stormers player tried to poach the ball from John Porch.

In the act of poaching, Senatla overreached and wasn’t supporting his own body weight, which is an argument for another day. Aki stole the limelight in this ruck by making contact with the head.

If the answer to the head contact question is yes, we must then look for foul play. In this instance, foul play has occurred because Aki was at fault.

He had a clear line of vision on his target and the target didn’t have any sudden change in direction or dip in height. The considerations here include reckless or intentional acts and whether the action was avoidable or not.

Aki’s action was certainly intentional. He intended to remove the poacher from the ball in the way that he did. He always looks to impose his superior strength and physicality on the game, but in this case, he got it wrong.

The referee will then look at the degree of danger to determine any mitigation in the incident. In this case, Aki was a late support player after the Porch break. He entered the ruck with no real control due to his speed and force.

It was a high degree of danger and a high level of force so the referee couldn’t find any mitigation to reduce the sanction to a yellow card or even a penalty like in some cases.

In fairness to Aki, he approached the ruck at a low height. He didn’t enter upright but that doesn’t tell the full story. He changed his height but was always angled down and towards the ground. He went off his feet which means he couldn’t change anything once he lost control of his feet. Not that he would have been able to anyway with the speed at which he entered the ruck.

Considering every angle of this incident, Aki got the punishment that his rucking action deserved. That’s not to say that Aki went out to commit an act of foul play, it isn’t a personal agenda when deciding on the outcome. The referee has to objectively decide the sanction, which he did perfectly in this game.

The bigger talking point came as the referee was brandishing the red card. Aki lost control of his emotions and spoke to the referee in a manner that isn’t acceptable on a rugby pitch.

He’s an emotional player and I’m sure anyone who has played or watches the game can understand his frustrations, but that doesn’t excuse how he spoke to the referee.

He repeatedly, and aggressively, asked the referee how he would like a player to enter the ruck. Aki’s question can be answered by reading through the law book, but the onus is also on coaching staff and players to understand and discuss these laws regularly.

If I was a coach answering this question, I would go back to the very start of the play. Porch made a break, and his support players were later than the retreating poacher. Here, we need to look at our attack and ask the question as to whether we can run closer support lines or anticipate the line break that bit earlier.

Not only would it result in a potential offload and the avoidance of the ruck with quality continuity play, it would also make our chances at winning the ruck higher, with less incidences like this one.

The ruck nowadays is a race. Referees are under pressure to award penalties early because the longer players spend in a ruck or a poach position, the more likely it is for an injury to occur.

Attacking support players need to win the race into the space in the breakdown and get their shoulders beneath the chest of the approaching defensive player, all while keeping their feet. You can’t go diving towards the ground but if you can win this race to space, the poaching opportunity doesn’t occur.

I understand that this is the aim, but you won’t always win the race into the ruck, much like Aki didn’t win that race at the weekend. So, to answer this question more directly, Aki should have arrived quickly, then 'chopped his feet’, or slowed down a fraction to gather his balance, take smaller steps to reduce his height and then drive from low to high to remove the player from the tackle situation without flying off his feet in a downwards action

Would that have taken Senatla out of the ruck? I’m not sure, but it’s the way to legally clear out a player that has beaten you into the space. If it doesn’t work and Senatla wins a penalty for the tackled player holding on, then Connacht need to address the reason for the isolation of their attacker, or chalk it off as a once-off which happened with a positive action of a line break.

Senatla was after losing his whereabouts in the ruck anyway and didn’t have his hands directly on the ball that Porch was attempting to place. He had lost his balance and gone off his feet. Therefore, if Aki didn’t commit an act of foul play, there was every chance that he would have had a chance to clear out the ruck legally and/or Senatla could have been penalised for going off his feet in the act of poaching. We didn’t get to see that play out because Aki obliterated everything in sight.

On that note, as coaches, we need to be careful with our language in pumping players up for the contact area. Imposing your physicality on a game and asking players to dominate the collision may cause them to spill over and get the point of entry wrong. We need to be accurate in the contact area, and then bring a level of physicality that the opposition can’t live with.

This accuracy will dictate whether the level of physicality is legal or not and must therefore be the first line of communication.

I feel for Aki in some ways. He’s a big, powerful centre with unbelievable speed and acceleration in contact. Other players aren’t as powerful as that and probably get away with more contacts on the pitch.

You don’t want stronger players to get refereed with more scrutiny. However, it is up to Aki himself to use these strengths in the right way.

Hopefully, these head contacts will be reduced with more and more sanctions, but we have a long way to go before head contact isn’t the talking point by the end of the rugby action every weekend. 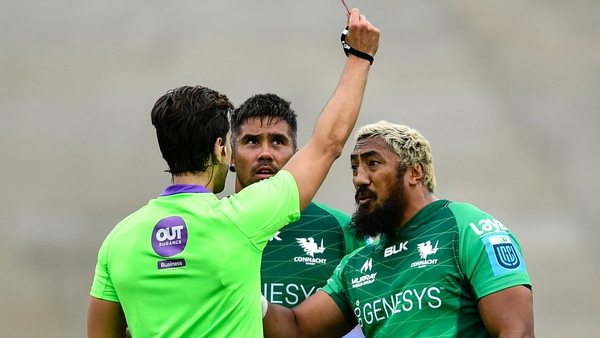