New Zealand produced their most dominant performance of the season to steamroll Argentina in rainy Hamilton and put their Rugby Championship defence back on track.

After suffering their first home defeat to Argentina in Christchurch a week ago, the All Blacks brought the same starting XV but a ruthless mindset as they tore the visitors to shreds with seven tries in the bonus-point win at Waikato Stadium.

Ethan De Groot, Caleb Clarke and Rieko Ioane crossed early as the home side stormed to a 24-3 lead at half-time before Jordie Barrett, Ardie Savea, Brodie Retallick and Beauden Barrett added tries after the break to complete the rout.

All Blacks captain Sam Cane, under huge pressure after struggling in recent Tests, came off to a warm ovation from the rain-soaked crowd after helping set up Jordie Barrett's 61st-minute try.

"This week we were in the game right from the start and were able to turn that into points so it was pretty enjoyable," said Cane.

"I thought our defence was outstanding. We were able to force them into a heck of a lot of errors but on top of that our discipline was really good so we were able to capitalise on that and counter-attack."

It was a dirty night for Michael Cheika's Pumas, who racked up handling errors, lost out-half Santiago Carreras to an apparent thigh injury and had lock Tomas Lavanini yellow-carded in the opening half.

They were scoreless until Emiliano Boffelli knocked over a penalty in the 33rd minute and then shut out thereafter.

Lavanini dropped a pass from the kick-off, paving the way for an early Mo'unga penalty, before prop De Groot thundered over the line from five metres out in the tenth minute.

Ioane sliced through the midfield nine minutes later, dishing off to Clarke who crossed at the left corner to put the home side 17-0 up.

A Samisoni Taukei'aho try was cancelled on review due to a knock-on in the build-up but the All Blacks had their third five-pointer two minutes before the break.

With Lavanini yellow-carded for foul play, Cane opted for a five-metre scrum and Ioane burst through under the posts after quick hands from fellow centre David Havili.

Argentina battled to hold back the tide of black jerseys after the break until Barrett and Savea slammed the door shut with a two-try burst from the hour mark.

Retallick celebrated his comeback from a broken cheekbone by barging over six minutes from the final whistle before Beauden Barrett completed the statement win with their seventh try a few minutes after the siren. 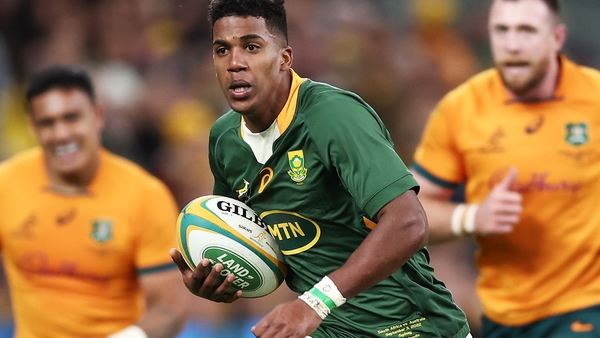