Argentina beat the All Blacks for the first time on New Zealand soil with a 25-18 victory in a Rugby Championship test in Christchurch this morning.

The Pumas achieved their first ever win over New Zealand two years ago in another Rugby Championship match in Sydney.

"I'm very proud of our team, we are starting to believe what we can do, not just a magic moment like our first win (in Sydney)," said captain Julian Montoya.

"Very, very happy, very, very proud, it's a very special moment for us."

The boot of winger Emiliano Boffelli, who kicked five penalties, kept them in the contest when New Zealand scored two tries in the first half and kept them ahead after flanker Juan Martin Gonzalez had scored an opportunist second-half try.

New Zealand, who played the last nine minutes with 14 men after Shannon Frizell was shown a yellow card, will almost certainly be plunged back into the crisis that was apparently ended by their victory over South Africa two weeks ago.

Tries from Samisoni Taukei'aho and Caleb Clarke should have given them a comfortable lead at halftime but ill-discipline throughout the match cost them dearly. 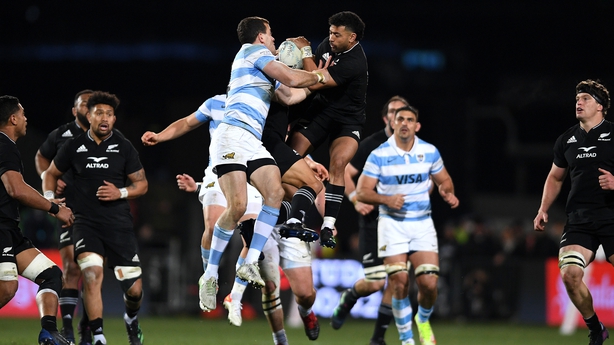 The victory gives Argentina successive wins in the Rugby Championship for the first time after their impressive 48-17 thrashing of Australia in San Juan two weeks ago.

They also remain top of the championship standings on points difference ahead of Australia, who earlier beat South Africa 25-17 in Adelaide.