Foster was confirmed as coach through to next year's World Cup in the wake of victory over South Africa at Ellis Park, but a first home defeat to Argentina in Christchurch has again set alarm bells ringing.

New Zealand media on Monday said another loss to the Pumas in Hamilton on Saturday should be "the end of the line" for Foster.

"One more loss and Hamilton, for the sake of a legacy 120 years in the making, has to be the terminus," rugby writer Gregor Paul wrote in the New Zealand Herald.

"Everyone knows that defeat this week will destroy all hope, make it impossible to keep talking about micro improvements in skill execution while lamenting macro failures in decision-making."

While Foster has been spared the axe, NZR have repeatedly shaken up his staff, sacking two assistant coaches after the home series defeat to Ireland, while bringing in a new forwards coach and selector Joe Schmidt as attack coach and strategist.

NZR seized upon the rousing win at Ellis Park as evidence the changes were working but the Christchurch shock further eroded fans' confidence in the team.

Their tally of four losses for the season so far has been surpassed only twice, in 1998 when they lost five under former coach John Hart, and in 1949 when they were defeated six times.

With two Rugby Championship fixtures against Australia and away matches against Japan, Wales, Scotland and England to round out the season, more unwanted history could be in store.

Foster acknowledged fans' frustration and expectations that things needed to get better quickly.

"We have got a lot of faith that some of the things we're building are paying dividends," he said.

Welcome back Guzzler! Brodie Retallick will re-join the squad in Hamilton. pic.twitter.com/fd3ejPqnUQ

"We have to make sure that we are taking every opportunity we get, and with Test match rugby you might only get one or two in a game," he said.

"It's something I know we'll have a good look at over the next couple of days."

Selectors may also take a good look at Whitelock's second row partner Brodie Retallick, who returned to rugby with provincial side Hawke's Bay over the weekend after being sidelined with a broken cheekbone during the Ireland series.

Another former World Rugby Player of the Year, out-half Beauden Barrett, is expected to be available after missing Christchurch with a neck problem.

"The body's come through good, whether that's enough for the coaches to now pick me here, or go back to Hawke's Bay, we’ll see how that goes with the week," said Retallick, who has re-joined the New Zealand camp in Hamilton.

"But I would love to be out there." 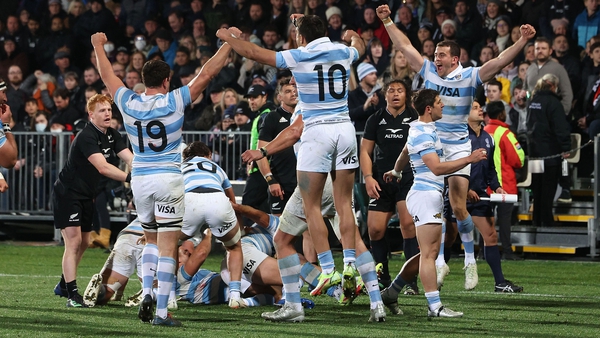 Argentina claim historic first away win over All Blacks