Ireland failed to hit the heights of last week's demolition of Japan, falling to a 29-10 defeat in their second Test in Tokyo.

While the tourists briefly held the lead from an early Natasja Behan try, they were second-best throughout, badly missing the injured Sam Monaghan and Dorothy Wall in particular, and struggling at the breakdown, where they were guilty of conceding several costly penalties.

The hosts ran in for five tries to cap off their final home game before the World Cup in New Zealand, the first two of which saw Ireland sliced open off first-phase possession.

Following last week's brutal start in Shizuoka, a steady opening had been top of the priorities list for Ireland head coach Greg McWilliams.

The players gave him that, and more, as Behan crossed for her first Test try inside four minutes.

Having won multiple penalties in Japanese territory, Ireland struggled initially to get their maul working, opting instead to break down the blindside, where Ailsa Hughes fed Behan, and the Wexford native dived over in the corner.

Unfortunately for Ireland, that try was about as good as it got.

The conversion from O'Brien was narrowly missed, before Japan hit back on the quarter-hour, out-half Ayasa Otsuka catching Enya Breen out in defence to run over uncontested, after a sustained period of pressure and penalties, levelling the game at 5-5.

For large portions of the first half, neither side could grab the momentum, with possession swinging both ways, and largely in unthreatening areas.

Discipline was costing Ireland, and they were lucky to keep 15 players on the field with captain Nichola Fryday given two 'final' warnings by referee Lauren Jenner. 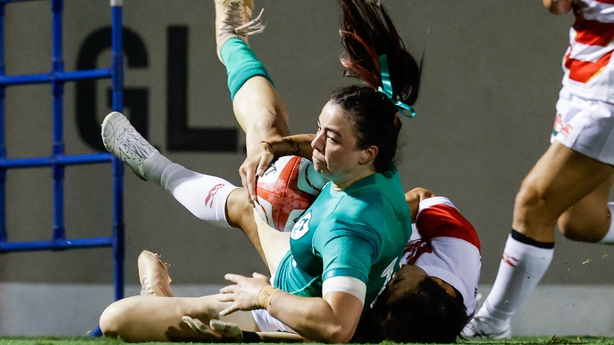 It was Japan who took a deserving 12-5 half time lead, with full-back Rinka Matsuda finishing off another excellent strike play in the 22, charging over following a neat inside pass.

With Ireland's discipline continuing to fail them early in the second half, the hosts created some breathing space, Hinano Nagura scoring third try in the corner.

It was the score that seemed to kill off the game, and it wasn't long until they had their fourth try, Matsuda running in for her second of the game, brushing off two tame tackle attempts from Behan and Méabh Deely.

While they had outscored Ireland by four tries to one, three missed conversions enrured the scoreboard wasn't as healthy for the hosts as it should have been, and when Katie O'Dwyer finished off an Ireland maul to make it 22-10 on 60 minutes, the possibility of a comeback seemed well with reach.

But again Ireland struggled to keep hold f the momentum, and with 14 minutes to play Japan iced the result, replacement front row Sachito Kato bundling her way over, the conversion making it 29-10, a lead the tourists tried but failed to eat into. 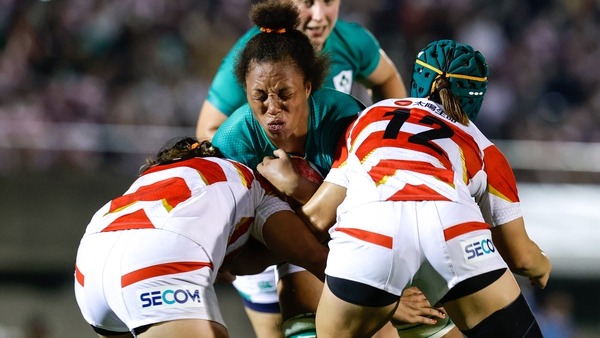