Ireland head coach Greg McWilliams says the positives of their summer tour to Japan far outweigh the negatives, despite falling to a 29-10 defeat in this morning's second Test in Tokyo.

Having run in nine tries in last week's 57-22 victory, Ireland struggled for any momentum, with the 19-point defeat a fair reflection of the performance.

In contrast to the previous Saturday, it was the tourists who looked the better team early on, Natasja Behan's try after just four minutes giving Ireland a perfect start.

But ill-discipline allowed Japan territory and possession for large parts of the first half as they built a 12-5 lead, before three more tries in the second half killed things off.

In spite of the flat performance, McWilliams remained upbeat on the tour as a whole, maintaining he was pleased with the depth he's added to his squad.

"You're always disappointed, we didn't fire any shots, we couldn't get a foothold in the game, but there is a bigger picture," he said.

"We talked to the players about having to separate the emotion from the process and realise there are lots of good things.

"We'll learn from today. We were ill-disciplined in the first half and we'll learn from that. Momentum in sport is a funny thing and we struggled to gain any momentum. When we had a little bit of it, it didn't go our way, and we need to own that."

The head coach added that on balance, he believes Ireland's first overseas summer tour has been a success.

"If you said to me beforehand that we would go 1-1 in the summer tour against a side prepping for the Rugby World Cup, I probably would have taken it, and more importantly we had an opportunity to develop as a group and really know these players. I'm excited for where this programme is going, and we have to learn lots of lessons from today.

"Let's be honest, after winning last week we wanted to go 2-0. We came up against a different Japanese side that were very physical. They played at a good pace and we knew they’d be coming at us. As I said to you, the game just went against us, it's why we love sport. One minute it's great and the next minute it's terrible and you're on the receiving end of a result like that.

"I’ve got to say, as the head coach of a group of management and players, I’m so proud. I’ve been very lucky to have coached at schools level, at provincial level, international men’s, the professional game and I can genuinely say that this group are a special group that are only going to get better.

"To see how much they’ve grown in the last four or five weeks, it gives you real hope for where they’re going to go to as a group. They should be very proud and their families should be proud. We’ve got to get better and we’ll continue to do that." 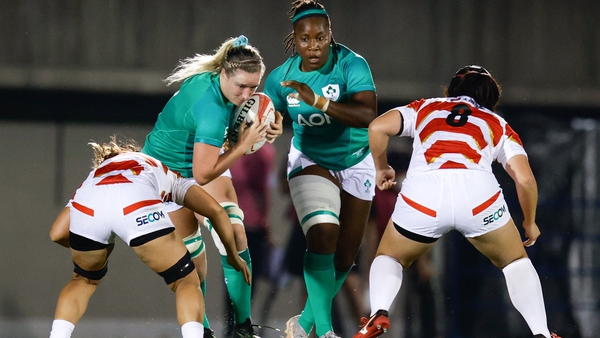