New Zealand head coach Ian Foster insists his side are still evolving as they prepare to face South Africa in what could potentially be his last match in charge.

If the court of public opinion back home was both judge and jury, Foster may leave the job whatever the result of Saturday's Rugby Championship fixture at Ellis Park.

But it is certainly hard to see his position being tenable in the face of another loss, with the All Blacks having been beaten in five of their last six Tests.

"I’ve said this group is still evolving and these experiences are absolute gold for us," said Foster. "We don’t like not winning but the reality is we’re getting some clear markers against a very good team."

Foster brought in Richie Mo'unga for Beauden Barrett at out-half for the Johannesburg contest while he also tinkered in the pack with flanker Shannon Frizell and props Tyrel Lomax and Ethan de Groot coming into the starting line-up.

"Richie’s trained really well and contributed massively behind the scenes and it’s a chance to switch around," said Foster.

The All Blacks were second-best in every facet of the game in the first Test in Nelspruit, a 26-10 victory for the Springboks that was their biggest over the old enemy in 94 years.

South Africa have also made changes to their starting line-up at their traditional fortress, though two were forced as Jesse Kriel comes in on the wing for the suspended Kurt-Lee Arendse, while Jaden Hendrikse is at scrum-half after Faf de Klerk was concussed in the opening minute in Nelspruit.

The return of Ulster No 8 Duane Vermeulen after knee surgery further bolsters their pack.

"Duane has a massive presence on the field and there is no bigger game for him to make his comeback from injury than facing the All Blacks," said South Africa head coach Jacques Nienaber.

"He is an enforcer on attack and defence and we know he will give everything against a physical All Blacks team that are desperate to bounce back strongly from a challenging run of results."

Nienaber admits his side are braced for a New Zealand backlash.

"New Zealand are similar to the Springboks in the sense that they do not give up," he said.

"They have quality players within their ranks and given the rich history between the sides and their desperation to turn things around after a few disappointing results, we know we are in for a massive challenge." 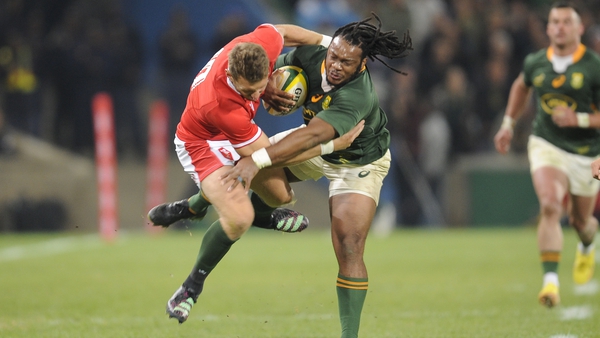