Richie Mo'unga will make his first start of the year for New Zealand in Saturday’s crucial Rugby Championship rematch with South Africa.

Mo’unga replaces Beauden Barrett at out-half and is one of four changes to the starting XV for the Ellis Park contest.

The All Blacks have lost their last three matches, and five of the last six, with head coach Ian Foster reportedly facing the sack if they suffer another defeat this weekend.

Foster has freshened up his front row with props Ethan de Groot and Tyrel Lomax packing down either side of Samison Taukei’aho, while Shannon Frizell replaces Akira Ioane at blindside flanker after making a try-scoring impact off the bench in the 26-10 loss in Mbombela.

Ioane is named among the replacements along with uncapped prop Fletcher Newell and Barrett, who has been passed fit following a mid-air collision with Kurt-Lee Arendse at the end of last weekend’s match.

"Belief and confidence remain high in our group, which is working incredibly hard this week," said Foster.

"Playing at Ellis Park is always a special occasion for any All Black team, and this weekend will be no different."

South Africa made five changes to their run-on side with Ulster’s Duane Vermeulen named at No 8.

Argentina have made four changes to their team to take on Australia in their second Rugby Championship match in San Juan on Saturday.

Matias Moroni replaces Matias Orlando at centre and there is a switch on the wings as Emiliano Boffelli moves to the right in place of Santiago Cordero, to allow Juan Imhoff to play on the left.

Cheika also makes one change in the pack, where Thomas Gallo comes in for Nahuel Tetaz Chaparro at loosehead prop. 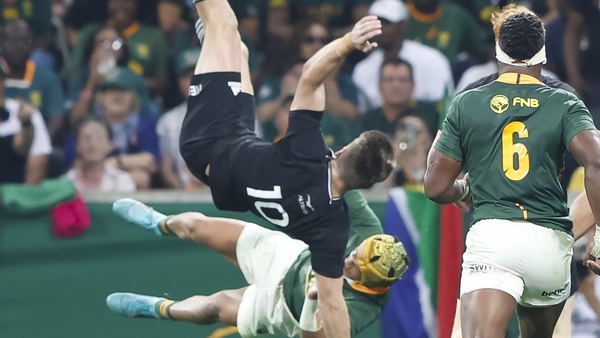