New Zealand's Beauden Barrett admitted he feared the worst upon hitting the ground following his mid-air collision with South Africa's Kurt-Lee Arendse during their Rugby Championship opener in Nelspruit on Saturday.

Barrett landed dangerously on his head after being tackled mid-air by Arendse in the 75th minute of Saturday's test, after which both players had to leave the field.

The New Zealand out-half injured his neck in the incident and Ian Foster confirmed he would face a fitness test ahead of next weekend's test in Ellis Park.

Arendse, also injured in the collision, was shown a red card by referee Angus Gardner as he was receiving treatment on the field and on Tuesday was issued with a four-match ban.

"It was quite a big collision and I did think the worst instantly; especially when I was on the ground and - I can't remember who it was - told me to stay still," Barrett told New Zealand's media manager.

"It wasn't until (the doctor) came on and asked me 'can you move your fingers? Your toes?' - I was relieved to have passed those tests. I eventually sat up and was able to walk off and get on with it.

"But there was a fearful period there for a minute or so where you do think of the worst. It's quite scary when you go over backwards and you find yourself come down on your head and shoulders.

"It's part of the game; I understand that. Every time we go up for a high ball we've got to be courageous. Sometimes the chasers don't get it right. They have intentions to get up but find themselves running into the person, which happened in the weekend."

Barrett said that New Zealand were aware that South Africa would seek to contest Handre Pollard's contestible kicks, Arendse having scored the game's opening try through such a play. The New Zealand back doesn't expect South Africa to alter their approach in the wake of the incident.

"It's something we expected from South Africa in terms of the high ball collision and contest. I don't think they'll change anything; they'll look to make it a real contest. We'll continue to be courageous and get up; we'll just have to, under the current rules, our escorters have to do a job within the rules to legally stop that chaser from running a good line and allowing that mid-air collision.

"Relief is an understatement."

New Zealand lost the Rugby Championship opener 26-10 last weekend, their third defeat in a row and their fifth loss in six tests, a run which has heaped pressure on Ian Foster's coaching regime. 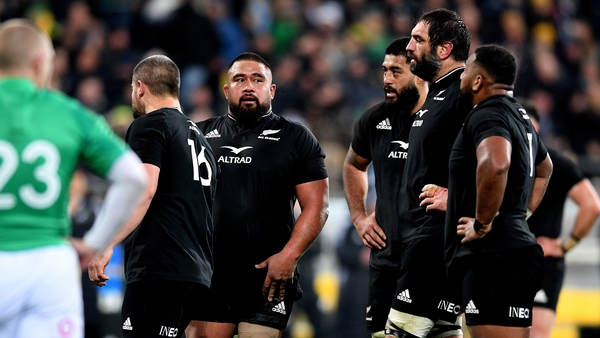