Looking to build his squad and maintain the confidence ahead of Saturday, Andy Farrell has named a completely different XV for Ireland's clash with the Maori All Blacks in Wellington on Tuesday morning.

Ireland come into this one off the back of a historic win last weekend, setting up a series decider on Saturday.

Ireland have two games left on their tour of the land of the long white cloud, in what could end up with a historic first Test series win in New Zealand.

Before Saturday's showdown, Ireland face the Maori All Blacks, in what is another chance for Farrell to use his extended squad.

Ireland were well beaten by the Maori in the opening game of the tour by 32-17 and they will be looking for revenge when the two sides meet again at Sky Stadium.

Sky Sports Action will be showing live coverage of the game from Sky Stadium, getting under way at 7.50am.

RTE.ie/sport and the RTÉ News app will have have a live blog of the game, as well as a match report and post match reaction throughout Wednesday.

It is set to be raining all day in the New Zealand capital with temperatures expected to be around 13C.

Keith Earls will captain the Irish side in a team that features a half-back pairing of Ciaran Frawley and Craig Casey.

Ireland have some familiar names on the replacements bench and Farrell will be looking to manage the minutes of the likes of Conor Murray, MAck Hansen and Jack Conan ahead of the series decider.

Farrell makes three changes from the opening game of the tour against the Maori, with Ulster pair Stuart McCloskey and Michael Lowry added to the backline and Niall Scannell selected to play hooker.

McCloskey joined up with the Irish squad in New Zealand as a replacement for the injured James Hume, who picked up a groin issue in the defeat to the Maori in the opening game of the tour.

What the coaches said

Clayton McMillan (Maori All Blacks): "We are anticipating Ireland to come back strong on Tuesday, we have learnt a lot from that first match in Hamilton as I am sure they have too."

Andy Farrell (Ireland): "This, as we have been saying all along, is an opportunity to grow the group. A chance for the guys who have had to wait two weeks for another chance. Another opportunity to show us how much they have improved. 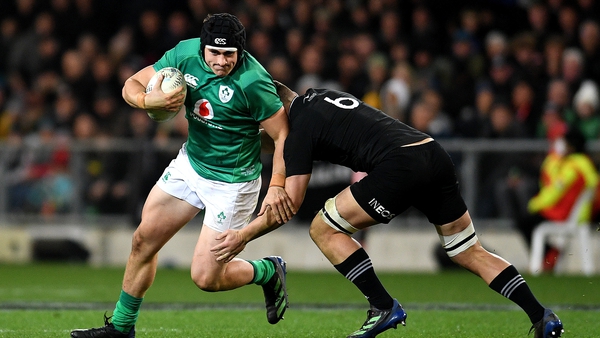