The All Blacks have seen multiple changes to their playing squad and coaching staff this week, after a Covid-19 outbreak sidelined frontline players such as Will Jordan, David Havili and Jack Goodhue, as well as head coach Ian Foster, and three of his assistants.

Farrell named his side this morning for Saturday's first Test in Auckland (8.05am Irish time), with Peter O'Mahony and Keith Earls both included in the starting XV.

Cian Healy has been named on the bench, despite suffering an ankle injury in yesterday's warm-up game against the Maori All Blacks.

Initially, there were fears that the veteran loosehead could be ruled out for the remainder of the series, but Farrell says his issue is not as bad as first feared.

"I think he had a bit more of a scare than anything else," Farrell said.

"He recovered pretty quickly in the changing room after the game.

"He's still a bit sore this morning but he's obviously going through a few protocols now with the rehab but we’re going to give him until tomorrow, he’s made such improvement. We’re optimistic about that."

If Healy has a setback in the next 24 hours, it's expected Tom O'Toole will replace him on the subs bench, with Finlay Bealham available to cover loosehead, while Leinster's Ed Byrne is set to join the squad as additional cover, as revealed by Bernard Jackman on this morning's RTÉ Rugby podcast. 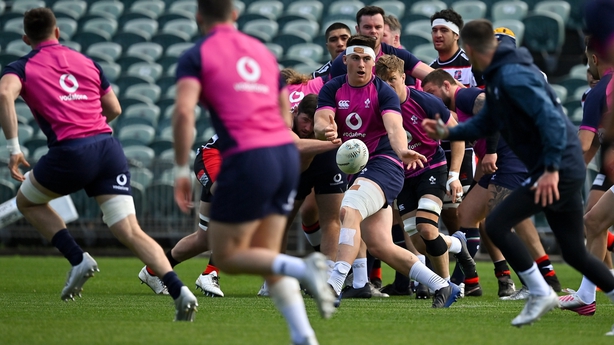 James Hume hasn't been as lucky as Healy it seems. The Ulster centre suffered a hip injury in the second half of yesterday's defeat, and while he's still waiting on the results of a scan, Farrell didn't sound confident about the outcome.

"Obviously we're only a few hours after the game so people do tend to wake up pretty sore but it’s not looking great for him," he added.

The All Blacks also named their squad this morning, with eight survivors from the starting XV in November's defeat to Ireland at the Aviva Stadium.

On top of their Covid-19 outbreak, the three-time world champions have also lost tighthead prop Nepo Laulala to a neck injury, but head coach Foster has still been able to name a strong side, particularly in the pack where Scott Barrett has been included in the back row.

Farrell says he doesn't expect the hosts to drop their standards.

"They're pretty good, a pretty good side. I know they have one or two injuries, and so do we, but at the same time they could pick four teams in New Zealand and they'd be unbelievably hard to compete against.

"We're under no illusions what we're up against at the weekend. Like I've said before, any type of performance we've had before where we managed to get over the line, that won't do this weekend, I'm sure about that.

"We expect them to be at their best, like we always do.

"We have a saying that we attack the game ourselves, we're still going through the stages of preparation, to make sure that we are keeping improving over the next couple of days and make sure we're ready for kickoff to be the best version of ourselves we can be."

And the Ireland coach also said his side will have to be far better than they were in Wednesday's defeat to the Maori, even though there's just one survivor (Earls) in the starting team.

"The team that took the field last night isn't the team that will play at the weekend, but there's lessons to be learned.

"What wins top level rugby will always be the same; your set piece, our discipline was pretty poor last night, so there has been good chat in and around that. The accuracy of our game in general, all that needs to come to fruition under extreme pressure, and it's difficult to do, but we're in a good enough headspace to be able to attack that full-on come kickoff on Saturday night."

Ireland are looking to become the first team in 28 years to defeat the All Blacks in a Test match at Eden Park, while they're also seeking their first ever win in New Zealand.

And Farrell says they will need everything to go right if they're to create Irish rugby history in Auckland.

"Of course everyone is aware of it, and of course we have talked about what it would mean to us, but that's not going to make it happen.

"It's always about nailing the detail and having a full understanding, and ownership of what the detail is all about, putting it all together, mixing it with the right emotions. Hopefully you put all the package together, and the opposition have a bit of an off-day at the same time, because with all best laid plans you have to be adaptable and go with the change.

"That's international rugby, it's not always going to go your way. How we adapt when moments aren't quite swinging for us is pretty important."

Follow Ireland's Test series against New Zealand via our live blogs on rte.ie/sport and on the RTÉ News App or listen to live radio commentary on RTÉ 2FM