Will Jordan is the latest All Black to be ruled out of this Saturday's first Test between Ireland and New Zealand, after testing positive for Covid-19.

The Crusaders star is the sixth member of the All Blacks camp to test positive in recent days, along with teammates David Havili and Jack Goodhue, as well as head coach Ian Foster and his assistants John Plumtree and Scott McLeod.

Jordan, World Rugby's 'Breakthrough Player of the Year' in 2021, would have been likely to start Saturday's first Test at Eden Park in Auckland, but his absence now opens the door for a possible debut for his Crusaders teammate Leicester Fainga'anuku.

It's a further blow to All Blacks preparations, with one of Havili or Goodhue also likely to have been named in the centre alongside Rieko Ioane.

Jordan will follow a seven-day isolation period as per New Zealand government guidelines, and while he would be cleared for the second Test in Dunedin on 9 July, his captain Sam Cane has hinted it could be the third Test a week later before the 24-year-old returns.

"We've talked about before, there’s a lot of depth and competition for places. I don’t know if [Jordan] was going to be starting or not, but I’d say he was a pretty good chance, but it just means someone else will step up in his place.

"Hopefully Covid doesn't knock him around too much and, realistically, he’s probably only a chance for the third Test," Cane said.

Yesterday, it was confirmed that former Ireland head coach Joe Schmidt would be drafted into the All Blacks coaching team on an emergency basis, where he will link up with Foster's assistants Brad Mooar and Greg Feek, the latter of whom was Schmidt's scrum coach with Ireland.

Schmidt had been due to take up the role of 'national selector' after the series against Ireland, but was jettisoned in early this week following the Covid outbreak in camp.

And the All Blacks skipper Cane has gone into further detail about Schmidt's role in the group this week.

"How lucky are to be able to call on someone like Joe Schmidt. It's been awesome.

"To be honest, he’s only just been in this morning, and he’ll only be in Tuesday and Thursday to help out on the training park. He’s helping out with defence predominantly, but it’s nice to have some wise eyes looking over things.

"He was predominantly helping out the backs this morning, so, to be honest, I haven’t actually worked with him on the training park.

"I think we’ve got our structures and our things in place which is Scott McLeod, defence coach, his set-up, and we can’t imagine Joe Schmidt’s going to come in and change anything about that.

"He’s just about lending another pair of eyes and chipping in and being able to coach on the run at trainings and give instant feedback to players, but nothing that’s sort of new," he added.

Follow Ireland's Test series against New Zealand via our live blogs on rte.ie/sport and on the RTÉ News App. 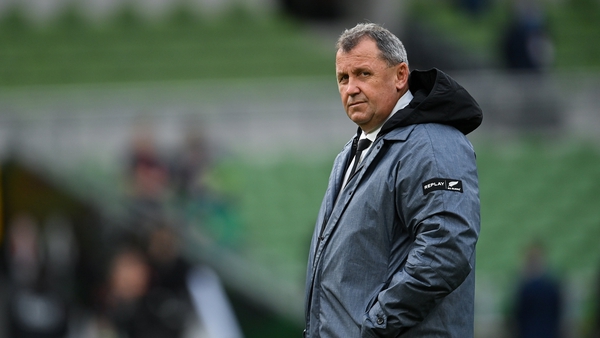 Head coach Foster among four Covid cases for All Blacks