From the moment Johann van Graan's future switch to Bath was confirmed in December, it felt inevitable that Munster's season would end in disappointment.

There were some high points along the way; the Champions Cup wins against Wasps and Exeter at Thomond Park, the performance against Toulouse at the Aviva, and a really impressive win against Ulster in Belfast in April, in which Munster looked to be hitting their prime at just the right stage.

But as valiant as their efforts were against Toulouse, the nature of that defeat flattened them, and it's no surprise that in the games that followed against Leinster and Ulster they looked resigned to the season ending empty-handed.

Those losses ultimately sealed Van Graan's legacy at the province, one that often promised but rarely delivered. Five semi-final appearances with five defeats, their only final coming by virtue of their top-two finish in last year's URC, before another limp performance against Leinster in the final.

From reaching the semi-finals of the Champions Cup in his first two seasons, they've yet to return to the last four, eliminated in the pool stage, last 16 and quarter-finals in the last three years respectively.

And while the Champions Cup is the yardstick by which Munster measure themselves, they're losing ground on their fellow provinces rapidly.

When Van Graan arrived in late 2017, he inherited a team that were already contending for trophies under Rassie Erasmus. Five years down the line they're no closer to ending that wait for a trophy. If anything they seem further away.

In contrast, they've watched on as Leinster won a Champions Cup, reached two more finals, and claimed four URC titles in a row, with the possibility of a fifth to come. It's even arguable Ulster have overtaken them, with the northern province having been in crisis when Van Graan arrived on Irish soil. 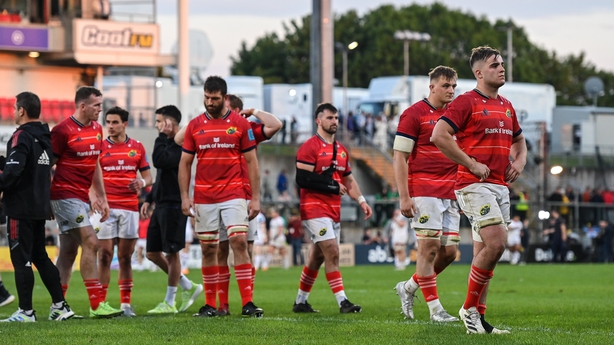 It's unfair to lay the blame on Van Graan and Van Graan alone. So much has been expected of Stephen Larkham who arrived as attack coach in 2019 before being promoted to senior coach a year later. But under the Australian's watch, Munster's attack has been a constant letdown, save for the occasional sunny day.

The 48-year-old is returning to Canberra with the Brumbies next season. We'll watch with interest how much attacking intent they show in Super Rugby.

The constant changing of styles has left Munster looking like a team without an identity. Those travelling to watch Munster this season never really knew what to expect. At the start of the season the indications were that the plans were taking effect. Against the Sharks on the opening day of the season they looked to move the ball wide at the earliest opportunity, to stretch play and get their outside backs in possession regularly.

Of the 13 derbies in Van Graan's time in charge, Munster can count just two wins. Their most recent meeting was low-point for the province, Leinster striding towards a bonus-point 35-25 win, despite having nothing to play for, and resting their first choice 23. That result, and the quarter-final defeat against Ulster on Friday, will likely cost some Munster men a spot on the summer tour of New Zealand.

When their second string went to Llanelli in early October and put on an exhibition of rugby in the sunshine against the Scarlets, it felt like this was the new norm. A week later the rain fell at Thomond Park, and they returned to their shells, scrapping their way to an ugly 20-18 victory.

During the winter months, they played winter rugby, and it was only when they returned to the blue skies and fast tracks of South Africa in March that they were given licence to take risks in possession.

For a side that are so often favourites to win, they don't always play like it. Gameplans seem to be designed around the opposition strengths rather than their own. Title-winning sides dictate the game, while Munster too often respond. 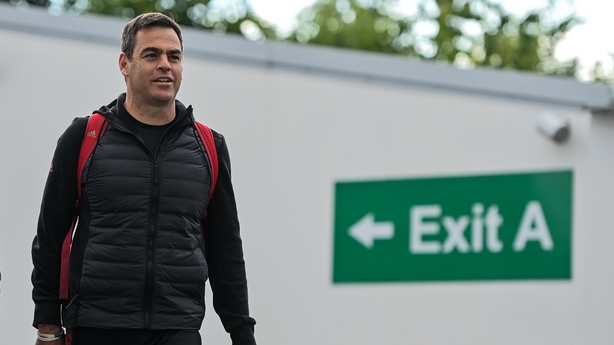 The hope is that with Graham Rowntree's new coaching ticket all coming from Munster stock, Mike Prendergast, Andi Kyriacou and Denis Leamy can tap into the DNA of the Munster sides they played on, and make the team look and feel like winners.

Van Graan (above) is expected to give a more detailed reflection on his five seasons in charge later this month, although it's likely Munster's record against Leinster will be one of his biggest regrets.

In particular, those in charge of balancing the books - whether that's chief executive Ian Flanagan, or chief operating officer Philip Quinn - have left Rowntree in a real bind in one of the most crucial positions; tighthead prop.

Of the 13 derbies in Van Graan's time in charge, Munster can count just two wins. Their most recent meeting was low-point for the province, Leinster striding towards a bonus-point 35-25 win, despite having nothing to play for, and resting their first choice 23. That result, and the quarter-final defeat against Ulster on Friday, will likely cost some Munster men a spot on the summer tour of New Zealand.

Often times, they looked beaten before the kickoff when standing opposite those blue jerseys.

It's not just on the pitch that Munster have issues.

Although the appointment of Rowntree as head coach, and the recruitment drive to bring in Prendergast and Leamy looks to have a lot of potential, the original plans of the Professional Game Board in Munster to to lock Van Graan and Larkham into new contracts so early did not sit well with fans, given how little evolution had been evident in Munster's game to that point.

There's also the now infamous and mysterious "1014 Group", a consortium of wealthy backers who helped bankroll the deals to bring in Damian de Allende and RG Snyman. It's believed that one of Van Graan's frustrations at Munster stemmed from the extent of the group's growing influence, as he learned the true price of money.

Just as mysterious as the identity of those providing the money, it's also becoming increasingly confusing as to how they spend their money.

Like all teams, the impact of Covid-19, and the reduced schedule of the URC means Munster have scaled back the size of their squad, but they've taken a real risk with the areas of they team they've prioritised.

Archer's haul of 248 games is six-and-a-half times the combined 38 matches of professional rugby that Knox, Salanoa and French have logged in their careers.

In particular, those in charge of balancing the books - whether that's chief executive Ian Flanagan, or chief operating officer Philip Quinn - have left Rowntree in a real bind in one of the most crucial positions; tighthead prop.

Given the premium you pay for tightheads, the departure of veteran Ireland international John Ryan was probably the difference between keeping and releasing two or three other squad players, but it's exposed the short-term thinking Van Graan has had in that position in recent seasons.

As things stand, Stephen Archer (below), Keynan Knox, Roman Salanoa and James French will be the four senior tightheads on Munster's books next season. On Friday night, Archer played his 248th game for the province, and may well reel in Donncha O'Callaghan's record of 268 games by the end of next season. 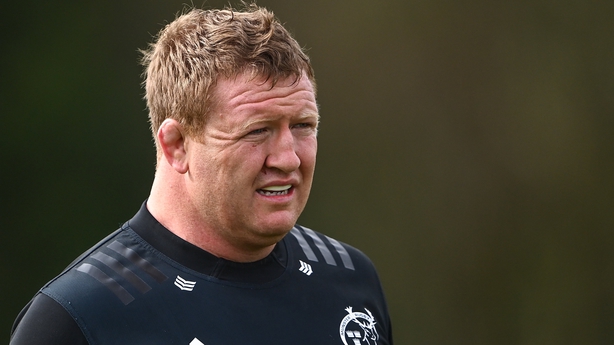 But behind Archer, Munster's tighthead stocks are light and untested. His haul of 248 games is six-and-a-half times the combined 38 matches of professional rugby that Knox, Salanoa and French have logged in their careers. Added to that, the vast majority of the trio's game time has come from the bench. Between them they have started seven games in their careers. Archer started 14 this season.

The likelihood is that Knox will be handed more responsibility next season, but the 23-year-old has rarely been trusted when it mattered by Van Graan, playing just one Champions Cup game, and starting just six times across the last three seasons.

After three seasons in the academy and one year on the senior squad, French's only appearance with the first team was in the Champions Cup win against Wasps in December, when Covid-19 saw to it that more than 30 players were unavailable.

With Van Graan desperate to end his time in Limerick with silverware, it's only natural that his thinking turned to what he could do in the short term, rather than preparing a team for the long haul. Archer and Ryan have the experience and the nous. The production line was no longer Van Graan's problem to worry about.

John Ryan's move to Wasps was only confirmed in April, but it had been known long before that he would be leaving, and still the 33-year-old featured in every one of the province's final 13 games of the season. All the while, Knox picked up four substitute appearances in that period, time and again holding tackle bags as the traveling reserve.

The development of Salanoa (below) and French is the most concerning, and the biggest gamble Munster are taking. 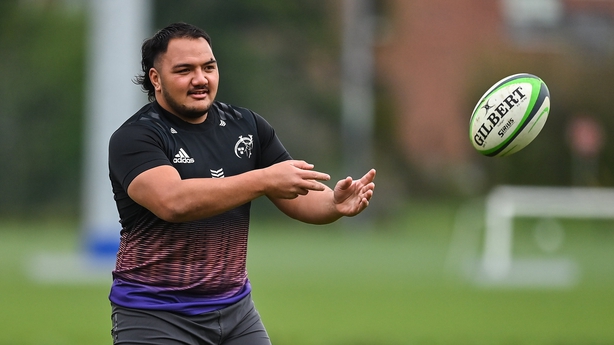 Salanoa came through Leinster's system before being headhunted by Munster in 2020, much to the displeasure of Leo Cullen at the time. While the Hawaiian native is still relatively new to rugby having only taken up the sport at the age of 17, his lack of development since moving to Munster is still a concern, as is his durability, with the 24-year-old consistently picking up injuries, with knee and ankle issues this season limiting him to just two appearances.

When the new season begins in September he'll be a month shy of turning 25, and still yet to start a game of rugby for either Leinster and Munster, with a combined 12 appearances since moving to Ireland. Rowntree and those running Munster obviously see something in him though, even if it has yet to make itself apparent, with Salanoa signing a three-year contract in January. Don't sell that stock just yet.

Ryan's exit may have been needed to spread the budget, but the decision to spend what would certainly be considerable money on Malakai Fekitoa at the expense of a top class prop has to be questioned, even if they were losing Damian de Allende.

Likewise, James French's growth in the professional game has been a slow-burn. Having played loosehead through the underage grades, it seems the former Bandon Grammar prop is being moulded as a tighthead. After three seasons in the academy and one year on the senior squad, the 23-year-old's only appearance with the first team was in the Champions Cup win against Wasps in December, when Covid-19 saw to it that more than 30 players were unavailable.

The glass-half-full thinking is that by the end of next season, at least one of the inexperienced trio will have become an established first team player, while the other two will certainly have had significant game time, and all of that coming under the watchful eye of one of the best props of his generation - Graham Rowntree. 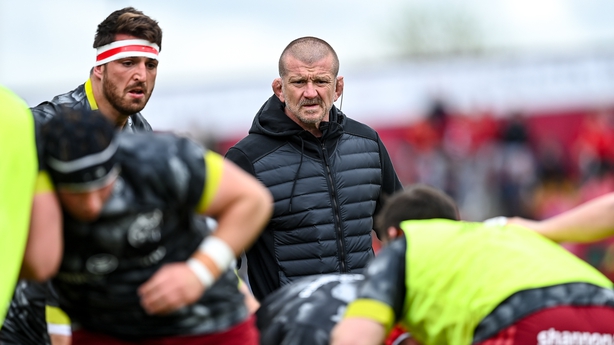 But the Champions Cup exits to Toulouse in both 2021 and 2022 have shown that Munster's lack of power in the front row is arguably their biggest issue in terms of personnel, and it's a huge gamble to let someone of Ryan's experience go with such an inexperienced trio coming through.

Ryan's exit may have been needed to spread the budget, but the decision to spend what would certainly be considerable money on Malakai Fekitoa at the expense of a top class prop has to be questioned, even if they were losing Damian de Allende.

While Munster are rolling the dice on the foundations of their setpiece, by contrast Ulster have doubled-down on it, bringing in Fekitoa's Wasps teammate Jeff Toomaga-Allen - also a former All Black - on a one-year deal, adding to what was already a healthy stock of tightheads in Tom O'Toole and Marty Moore.

Toomaga-Allen wouldn't necessarily have been the answer to all of Munster's problems, but recruiting yet another NIQ centre when the front row depth is so inexperienced seems a major gamble.

Fekitoa may have the skills to change a game, but it remains to be seen if he'll have the platform to do it. 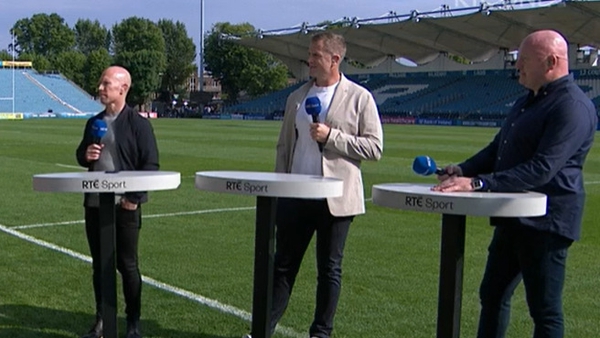