Saturday's Heineken Champions Cup final may well be decided by the respective quality at out-half, according to Bernard Jackman and Donal Lenihan.

Leo Cullen's side are heavy favourites to gain revenge for last year's semi-final defeat to Stade Rochelais, having comfortably seen off both Toulouse and the Leicester Tigers in previous rounds.

On this week's RTÉ Rugby podcast, Jackman and Lenihan broke down the key battles on the pitch, and believe the big gulf in quality is between the respective number 10s.

With Johnny Sexton playing some of the best rugby of his career this season, the pair are unconvinced by La Rochelle's New Zealander Ihaia West at out-half.

"He's a talented player, for sure, and I think the Top 14 suits him because there is space and mismatches, but I think it's going to be very claustrophobic for him if Leinster defend the way they normally do.

"Plus, there's the pressure of kicking goals and bouncing back from a pretty ropey semi-final, whereas you'd have to back Sexton.

"If the game becomes incredibly tough and comes down to a last 10 minute kick, you'd rather have Sexton or Ross Byrne standing over it rather than Ihaia West."

West has gained a reputation for being unreliable off the tee, although ironically one of his better days with the boot came in last year's semi-final against Leinster (below) where he made seven of his eight attempts, while also landing a drop goal, as the French side booked a place in the decider against Toulouse. 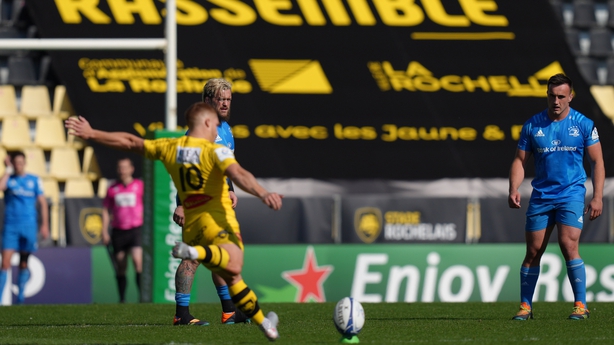 However, his inconsistency was exposed in the final where he made just four of his seven kicks at goal, before missing two of his three attempts in the Top14 final against the same opposition.

And although he scored a late try to seal their semi-final win against Racing 92 earlier this month, he struggled once again with his placekicking, scoring just one his four attempts.

And Lenihan agreed with Jackman's assessment of West's inconsistency.

"Ihaia West in the game against Racing 92, in the first 35 minutes, missed two very kickable penalties and a conversion. That's eight points, in a final or semi-final, it's massive."

And Lenihan also believes that Leinster are benefitting from Sexton missing out on selection for last summer's British and Irish Lions tour of South Africa.

He said: "In terms of Sexton, there's no question in my mind that missing out on the Lions tour was the best thing.

"He said he wants to play until the World Cup, he'll be 38 years of age, the fact he didn't go to South Africa last year is a catalyst in that now looking like it'll happen.

"Sexton, I think, has played his best rugby in years. Physically he looks in the shape of his life.

"That couldn't have happened if he went on the Lions tour. I think Leinster and Sexton are the beneficiaries in that, and that will prove key in this game at the weekend, without doubt.

European Cup final week there to be enjoyed too, says Henshaw