Women's rugby, and Ireland's status in women's rugby, has changed quite a bit since Aoife Doyle won the first of her eight caps.

The Limerick native had been a late addition to the Ireland team for that 2015 Six Nations meeting with France, the then-19-year-old brought onto the wing after Hannah Tyrrell had been ruled out with injury.

Her debut was the infamous 'Lights Out' game at Ashbourne, where Ireland were beaten 10-5 by the French in a match punctuated by two floodlight failures, and question marks over whether the Meath venue was fit to stage a game of international rugby.

Seven years on from the farcical scenes of Ireland's players warming up in darkness on the back pitch, women's rugby is having its moment, spearheaded by the relentless England.

Ireland are rotating between the RDS, Musgrave Park and Kingspan Stadium for their three home games this year, with impressive attendances for the first two games in Dublin and Cork.

The Red Roses have also taken their show on the road, with more than 14,000 fans packing into Gloucester's Kingsholm for their Round 3 win against Wales, and even more expected to be in attendance at Leicester's Welford Road this Sunday for the meeting with Ireland.

But while the game has moved forward since 2015, Ireland have moved back.

Doyle played three times during that Six Nations campaign as Ireland recovered from that defeat to France to win the title for the second time, defeating England along the way.

England's professional women's setup has seen them dominate the game in recent seasons, and the World Rugby 2021 Team of the Year's three emphatic wins in this year's championship are proof that they have no intention of slowing down.

Ireland are picking themselves back up from the floor. New coach Greg McWilliams was already dealing with a young, inexperienced squad before seven of his group - including five starting backs - were removed from the squad to focus on Sevens duty, a tug-of-war that shows no sign of being resolved.

"I think it's fairly obvious that England are sort of in a league of their own at the moment. They're definitely the best team in the world in my opinion and France are up there alongside them," said Doyle.

"So you have to take that onus on yourself that if you get time on your lunch break, you head to the swimming pool. If you have time after work, you do a recovery session. It's just on the player to figure out the key times they can maximise their recovery."

"I suppose having that time together definitely helps. For us, it's just about putting in extra hours and an extra bit of work to be on par with them. In the evenings, if we have work during the day, it just means putting in that time in the evening to do our analysis, do our extra work, do our training.

"It definitely is harder and the gap has been getting bigger between Ireland and teams like England and France, who are professional. I think we're just focusing on ourselves and how we can maximise the time we have together."

While England's squad have been able to dedicate their week to training, Ireland's squad will have juggled their preparation with day-jobs. 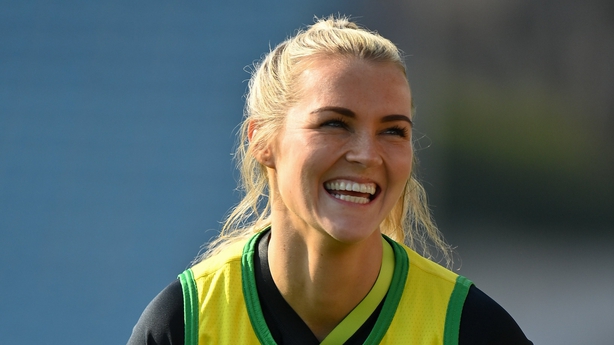 For Doyle, who is currently in her second year studying to be a primary school teacher, it's been a busy spring.

"I did my teaching practice in Limerick during the first three weeks of the Six Nations, which was definitely an absolutely mental time. I was up and down between Limerick and Dublin."

"Unfortunately that's what we have to do in order to play. Because we love the game so much, we are willing to do that as players but it's definitely difficult.

"In the Sevens, if we came back from a week-long tournament in, say, France for a World Series event, we always had two or three days off when we came home for recovery and then came in for a bit of light training.

"But we don't have that luxury at the moment during the Six Nations so when we fly back on Sunday, there will be girls in work and college on Monday morning.

"So you have to take that onus on yourself that if you get time on your lunch break, you head to the swimming pool. If you have time after work, you do a recovery session. It's just on the player to figure out the key times they can maximise their recovery."

"Two years ago I left the 7s programme and I actually wasn't sure if I was going to go back to rugby or not. I left the programme, wasn't playing club, and I just focused myself on studying."

Having come off the bench in the Round 3 win against Italy at Musgrave Park, the Railway Union woman is likely to be promoted to the starting side when McWilliams names his squad today, for what would be her ninth cap.

In reality, the 26-year-old is far more experienced than her eight caps would suggest, having played the XVs game since she was 12-years-old, and would likely have considerably more caps were it not for her four years exclusively in the Sevens system.

"As much as I hate to admit it, I'm a senior player now because the girls we have coming in, it's amazing. They're in their teens, they're 18 or 19 years old. But people like Dorothy Wall, Maeve Og O'Leary, Aoife Wafer just getting her first cap, I just want to bring them on as best I can and think back to how daunting it was for me coming in at such a young age.

"I try to mentor and help people along as much as I can.

"Two years ago I left the Sevens programme and I actually wasn't sure if I was going to go back to rugby or not. I left the programme, wasn't playing club, and I just focused myself on studying.

"I went straight into the Sevens programme from school and I had tunnel vision when it came to rugby. I didn't really want to do anything else. I re-assessed once we didn't qualify for the Olympics. I got a full season on the Series with no injuries, which was huge for me, and after that I just said I would focus on college now.

"I think I lasted three or four weeks until I was back in with Railway. I spoke with Adam Griggs, the coach of the 15s squad at the time, about coming back in and seeing what happens.

"I've been there ever since."