It was labelled a 'must win' game, and Ireland did so in impressive fashion.

Their 29-8 bonus-point win against a poor Italian side was never really in doubt, getting them off the mark in the TikTok Women's Six Nations, and relieving a degree of pressure ahead of a daunting trip to leaders England in Round 4.

In front of 5,089 spectators at Musgrave Park, Greg McWilliams' side looked by far the better team, continuing to try and move the ball around the pitch, while crucially they dominated Italy in the scrum, particularly as the game wore on.

Beibhinn Parsons and Amee-Leigh Murphy Crowe looked dangerous every time they saw the ball, while Eve Higgins continued to impress in the centre, scoring a second half try.

In the pack, Sam Monaghan's carrying gave Ireland consistent gainline success, and Hannah O'Connor justified her first start of the championship at number 8 both in open play and the lineout.

They led 10-3 at half time, Lucy Mulhall and Neve Jones crossing for tries, and playing with the strong wind behind them after the break they grew in confidence.

Higgins pounced on a kick to score their third try on 42 minutes, and they secured the bonus point soon after, with their much-improved scrum driving the visitors over to draw a penalty try.

And although they eventually allowed Italy in to score, there was still time for Katie O'Dwyer to cross for a fifth Ireland try in the closing minutes.

Ireland played into the howling wind in the first half, and it's effects were evident in the opening minutes when Lucy Mulhall's clearing kick could only just get beyond her own 22.

And that territory eventually led to an Italian penalty beneath the posts, one which centre Beatrice Rigoni kicked between the posts to give Italy a 3-0 lead. 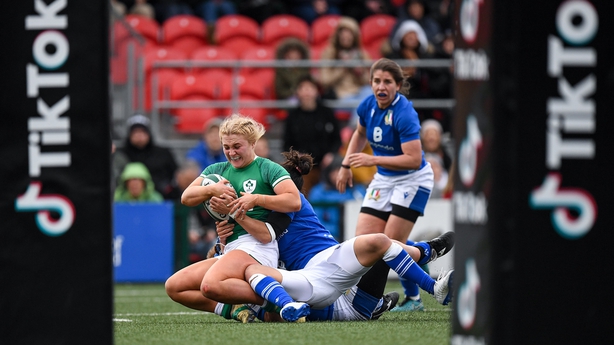 It took Ireland four minutes to get their hands on the ball, but when they did, they looked to get both Murphy Crowe and Parsons onto the ball as often as possible.

Their scrum, which had been decimated in the opening two games by Wales and France, looked steady, with Ireland men's scrum coach John Fogarty having spent the week in camp with regular coach Rob Sweeney having been unavailable.

Despite playing into such a strong wind Ireland began to control the game, and after forcing Italy into multiple penalty concessions, they eventually got their try on the 20 minute mark.

It started with Jones finding O'Connor at the lineout, before they mauled their way up to the line. With penalty advantage, Ireland probed at the Italian defence through several phases before creating a two-player overlap on the left wing, which Cronin spotted to loop a pass over to Mulhall who touched down for her first Test try.

In Mulhall, Murphy Crowe and Parsons, Ireland have game changing pace and the back three looked threatening any time they got the ball.

Murphy Crowe thought she had scored the second try of the day on the 30 minute mark, diving over in the corner after big carries from Monaghan and Edel McMahon got them into territory.

However, referee Aurelie Groizeleau deemed the sevens wing had taken a double-movement, awarding a penalty to the visitors, and despite replays suggesting Murphy Crowe hadn't been held on the ground by the tackler, the try would not be awarded.

Ireland only had to wait three minutes to make amends though. With the Italian penalties racking up, Elisa Giordano was yellow-carded, before Ireland struck on the very next play, hooker Jones finding O'Connor at the lineout again, before a powerful maul saw Jones touch down and score.

It sent Ireland 10-3 in front, but Cronin's conversion again went wide, as the hosts saw out the first half with a seven point lead.

The second half was just two minutes old before Ireland added an insurance score. It started with O'Connor stealing possession at the ruck, before Kathryn Dane box-kicked to space.

The scrum-half's kick was mishit, but fortunately dropped into a space between two Italian front row forwards. Neither could close the gap before Higgins, who took the ball in her stride before sprinting under the posts from 40 metres out.

This time, Cronin's conversion was true, giving Ireland a 14-point buffer, and a big wind at their backs.

By now they were in complete control. Having conceded eight penalties in the first half, Italy continued to stay on the wrong side of the referee, and it led to a penalty try on 50 minutes when Ireland's scrum marched over them over the line to make it 24-3 and guarantee the bonus point.

Ireland continued to dominate territory with Flood taking advantage of the wind to pepper kicks into the left corner but on 68 minutes Ireland were reduced to 14, substitute Aoife Wafer sent to the bin after a dangerous clearout at the ruck.

Italy had offered nothing in attack until that point, but from the resulting penalty they worked their way up the pitch, and after a further penalty was kicked to the corner, they mauled their way over for a score through hooker Melissa Bettoni.

It cut the score to 24-8, but with just seven minutes remaining it would just be a consolation, and there was still time for Ireland to have the final say, when O'Dwyer reacted fastest to a spilled lineout ball to dive over and cap off a much-needed win.