Graham Rowntree has once again been coy on suggestions he is in line to replace Johann van Graan as Munster head coach at the end of the season.

The province's forwards coach is staying in Limerick for at least two more seasons, having agreed an extension to his current role earlier this month.

However, with head coach Van Graan leaving this summer, Rowntree has also been mentioned as a potential successor to the South African.

Upon signing his new contract on 4 January, the Englishman said talk of him becoming head coach was "one for another day".

Three weeks later, he was still keeping his cards close to his chest when asked if he was in the frame to be promoted to the top job.

"There's a process in place, and my stance hasn’t changed," the 50-year-old told RTÉ Sport this afternoon.

"As I said three weeks ago, they [Munster and the IRFU] know my aspirations, nothing has changed since then. There’s nothing more to be said today."

Munster return to United Rugby Championship action this Saturday when they travel to winless Zebre [live on RTÉ2].

With nine players away on international duty with Ireland and Damian de Allende, Niall Scannell and Jason Jenkins all injured, the province are expected to give game time to some of the younger players in their squad, with Rowntree suggesting some of their academy stars that featured against Wasps in December could get given another chance to impress.

"Another great opportunity for these young lads, it'll be mostly young lads coming in and they’ve not let us down when we’ve put them in.

"We’ve got some nice combinations planned in terms of young guys and guys who have been around a bit."

It's also expected that Munster will give more game time to tightheads Roman Salanoa and Keynan Knox over the coming weeks.

Recent reports suggest that veteran tighthead John Ryan will depart the province at the end of the campaign, which could expose one of Salanoa or Knox (below) to a larger role in the team next season. 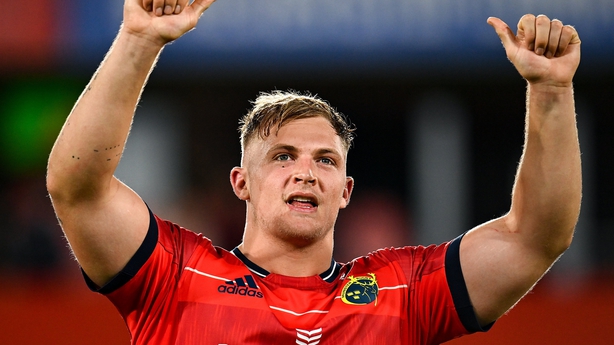 And while Rowntree didn't comment on Ryan's potential departure, he says they have big plans for their two young props.

"Roman has been playing for Shannon in the AIL, he's just needed some game time. Knoxy has been in and out of the group over the last block, they're very close.

"Both have huge futures at the club, I’ve huge plans for them. Young, dynamic, big and with great attitudes. They’re a pleasure to coach, and they’ll feature over the next few weeks," he added.

Meanwhile, it's been confirmed that Munster's postponed URC Interpro against Leinster will now be played on the final weekend of the regular season (20/21/22 May).

The sides had been due to meet on St Stephen's Day before a Covid outbreak in the Leinster camp led to the game being postponed.

And the URC have been able to avoid rescheduling the game during the Six Nations when both provinces would have depleted of international players.

Munster and Leinster had been due to play Glasgow and Edinburgh respectively on the final weekend of the regular season, but with the Scottish pair's own Christmas derbies in need of rescheduling, the league have been able to swap those fixtures around.