The 45-7 win over Wasps secured third place in Pool B of the Heineken Champions Cup but also warmed the Munster faithful who numbered over 13,000 at Thomond Park following the relaxation of limits on crowds.

The narrative in the build-up had been about Munster's stodgy style of play in some of their previous games but the hosts were prepared to run from deep and put the ball through the hands at every opportunity on this occasion.

"It was a good performance. We wanted to make sure we won the game and if the four tries were on offer, we wanted to take them," Van Graan told RTÉ Sport.

"Obviously, Leicester got five points and Quins won that game in the 83rd minute so the only thing that we could control was getting the five points but real positives out of tonight’s game." 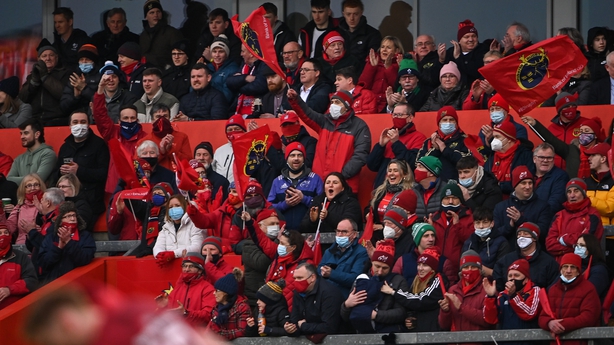 Asked if he saw more signs of variety and development, the South African said: "No, I think it was just another game in our journey, very nice to play at 3.15pm at Thomond, it was brillant to have the fans and families back, the weather was good.

"We knew that the opposition were going to play a bit more and that would give us more turnovers and more space than last week.

"Castres was a team that did not play at all in their own half and kicked the ball long. We handled that game pretty well and we handled tonight pretty well."

Munster, who will play Exeter in the next round, lost Ireland internationals Keith Earls and Dave Kilcoyne before kick-off.

"I don’t want to speculate on that. He’ll definitely go to Ireland camp. We just said we didn’t want to risk him.

"He’ll be looked after well in the Irish camp, he just wasn’t good to go for this weekend.

"Dave was just unwell. I spoke to him earlier this morning, and he said, 'Coach, I’m not good.’

"So we pulled him out of the game and decided to go with Jeremy [Loughman]."