The cruel hand of Covid cancellations may well lead to Ulster being dealt a last 16 tie with defending champions Toulouse, but Dan McFarland's side have kept up their side of the bargain.

It's four wins from four on the pitch in the Heineken Champions Cup for the province, the only team on their side of the draw to do so, the latest of which being a 34-31 bonus point win against Clermont Auvergne.

They'll finish second in Pool A behind Racing 92 who top the pile, with two of their four 'wins' being decided in the board room.

Barring a surprise win for Wasps at Munster tomorrow, it will be a two-legged affair against Toulouse awaiting Ulster later this season, and while they will have crucially have home advantage for the second leg, the spate of cancellations across the four rounds have meant the knockout seedings will be skewed.

After Racing's game against Northampton was called off due to Covid in the Saints camp, it meant Ulster required an 88-point victory against Clermont in order to leapfrog the Parisians. Good luck with that.

In the end it was a three-point win, although it should have been far more, Ulster shipping three tries in the final 10 minutes to set up a tense finale, when they had previously looked out of sight.

Mike Lowry was exceptional yet again, celebrating his recent Ireland call-up with a try, either side of hooker Rob Herring touching down.

Duane Vermeulen's first Ulster try secured the bonus point on 50 minutes before Robert Baloucoune got their fifth, both scores created by the outstanding Billy Burns.

Clermont had every right to wilt, but the introduction of Camille Lopez and Damian Penaud gave them life.

Three tries in six minutes saw them turn a 34-12 hammering into a 34-31 nail-biter, but Ulster showed just enough composure to see the result out. 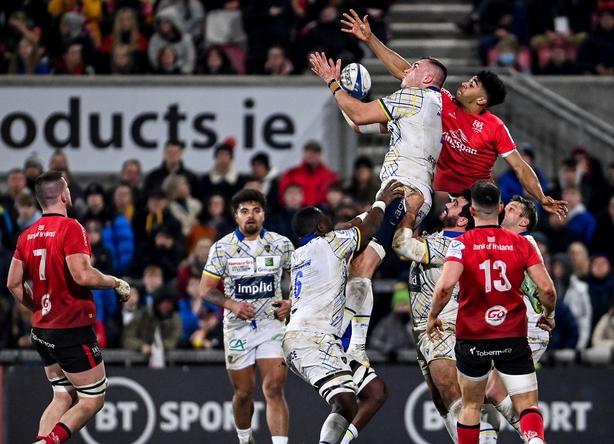 It was a patient start by the home side, who played without the ball for the opening minutes, but after winning a penalty just inside their own half, it gave them the platform from which they scored their opening try.

Two more penalties followed inside the 22, with Herring finding Kieran Treadwell both times. On the second occasion they set up a maul five metres out, and Clermont were powerless to stop Herring dotting down in the corner.

Doak was off target with the conversion from the left touchline, but it was an ideal start for the home side, leading 5-0 as the clock hit 10 minutes.

Restarts were an issue for Ulster in their Round 2 meeting with Northampton in Belfast, and it was again an area of frustration, with a knock-on leading to a Clermont penalty straight in front of the posts, one which Morgan Parra slotted over to settle the French side down.

Five minutes later ASM were in front; a monstrous scrum from Rabah Slimani and Etienne Falgoux ripped the Ulster pack apart to win a penalty 38 metres out, as Parra slotted his second kick of the day to make it 6-5.

Clermont were getting on the wrong side of referee Luke Pearce though, and when they conceded their fourth penalty of the game on 20 minutes, Ulster again kicked to the corner. The maul was stopped, but Nathan Doak moved the ball infield, with Michael Lowry producing a moment of class to cross for the game's second try.

Catching the ball in a standing start 10 metres out, a small hitch-kick saw him scorch Parra on the outside, to dive over in the corner. 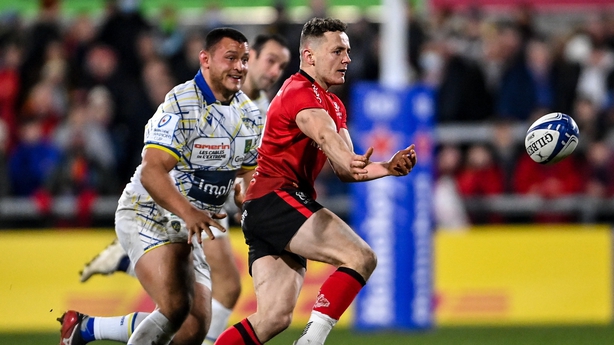 Doak's conversion was once again wide though, and when Ulster again conceded a penalty off the restart, Parra's third penalty meant Ulster were just one point ahead - 10-9 - having outscored their opponents by two tries to nil.

It had been a strange first 30 minutes, with Ulster playing all the rugby, and Mike Lowry in particular creating havoc on broken play. But Clermont were seizing the Ulster errors and after disrupting two lineouts they picked off a fourth penalty on 35 minutes, Parra was flawless off the tee to make it 12-10.

Ulster's ill-discipline was seeing them leak three-pointers, but Clermont's was giving up five-pointers.

When they infringed for the eighth time in the half, Pearce eventually went to the pocket and sin-binned winger Alivereti Raka.

It proved a costly card, as Burns went for the corner. In almost identical circumstances to their first score, Herring found Treadwell at the lineout, before finishing off the maul for his second of the game.

Having missed his first two conversions from almost the same blade of grass on the left touchline, it was third time lucky for Doak, who made it 17-12 to the home side to close out the first 40 minutes.

Doak added to his tally early in the second half to extend Ulster's lead out to two scores, a penalty straight in front of the posts making it 20-12. 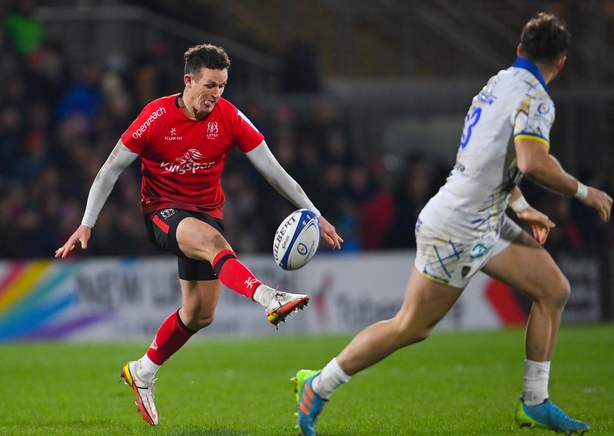 It was proving to be an expensive sin-bin, and Ulster brought up the bonus point before Raka's 10 minutes on the naught step had elapsed.

Ulster were constantly looking for width, and a wonderful flat pass from Burns to Lowry exposed the numerical advantage. Lowry scampered down the wing but was stopped inches short of the line. From the next phase, Vermeulen picked and burrowed his way over for his first try since joining the province in December.

Doak had his range now, and slotted the touchline conversion with ease, making it 27-12, an impressive 17-point swing during the yellow card period.

By now Ulster had a swagger, and almost scored a gorgeous fifth on the hour mark; Doak chipping a box-kick short which Hume ran on to before evading a pair of tackles. From the resulting phase, Burns dotted a crossfield kick to Ethan McIlroy out wide, but after he was stopped short of the line, a forward pass shortly afterwards ended the venture.

It was only a matter of time before the fifth arrived though, and it did on 65 minutes, this time from Baloucoune.

Another winding run from Lowry broke the field open, but the real credit should go to Burns, whose stunning floated skip pass was perfect for Baloucoune to run onto and score in the corner. With Doak off the field, it was Burns who drained the conversion from the right touchline to make it 34-12.

That looked like game over, but with 10 minutes to play Jaco van Tonder finished off a fluid Clermont breakaway to give the French side their first try of the game, and when Raka went over in the corner shortly after it cut the lead to 10 points at 34-24.

On 76 minutes the French side won another penalty and after kicking for touch, their maul cannoned through Ulster for Judicael Cancoriet to grab their third try in just over five minutes.

Lopez's conversion left the sold-out Ravenhill sweating; all of a sudden it was 34-31 and a game that had looked done and dusted 10 minutes previous was very much alive.

On the restart Ulster kicked deep and pinned Clermont back, before Baloucoune bundled Raka into touch, much to the relief of the Ulster fans.

It was enough to secure the victory, as Sam Carter claimed the lineout before the Ulster pack wound down the phases, eventually hoofing the ball into touch to bring up the final whistle, and complete the 100% record.