Connacht head coach Andy Friend says their defeat to Leicester is the toughest loss he's experienced in his three-and-a-half years in Galway.

His side surrendered an 18-point lead to the Premiership champions at the Sportsground, with a Hosea Saumaki try in the final minute sealing a dramatic 28-29 win for the Tigers.

Having trailed by 10 points early in the game, it looked like Connacht were heading for a famous victory when Tiernan O'Halloran's try - their fourth - made the game 28-10 early in the second half.

However a lacklustre 20 minute allowed Leicester get back with four points heading down the stretch, before Saumaki's winning effort.

"I probably can't think of a more disappointing one to be honest," Andy Friend admitted.

"Oh so close, but not the win in the win. It's very disappointing.

The match-winning try was contested by Connacht's players, who were adamant that Saumaki's foot was in touch as he grounded the ball.

However, the big screen at the Sportsground was deceiving, and on a more refined screen the try clearly looked legitimate, Friend confirming as much after the game.

"On first viewing (the try) I thought it was a try, on the first replay I thought the foot had gone into touch, on subsequent replays it looked like a try.

"I'm not going to complain about that. They went through the right process. The bottom line is we shouldn't have let them score in the corner," he added.

With 50 minutes played, final minute drama was far from the minds of the 3,000 in attendance at the Sportsground, who were dreaming of a first ever knockout place in the Heineken Champions Cup.

And while the two match points they picked up still leave them in contention for a last 16 place ahead of next weekend's pool finale away to Stade Francais, Friend says they learned a harsh lesson this afternoon.

"I suppose it was the first 10 minutes we were down 10 points, we showed our character, we rallied, we came back and were up 14-10 at half time.

"We came out after half time with two very good scores, up by 18 points.

"You must pay compliments to Leicester, they never give up, they keep coming. We knew it was coming, we looked at it and we made too many errors and stopped playing. We stopped playing, trying to protect the lead. We just talked it about it in the shed, the reason we got the lead was because we played the brand of footie we'd been training all year. It's a tough one to take.

"We knew what was coming from them. They want you to play from deep. I thought we were pretty relentless with that but when we got into that attacking zone over the half way, that's where we were playing.

"I thought at the tail end of the sin bin we had opportunities and we didn't take them. We'll review that one and we'll reflect on what could have been and should have been.

"At the end of the day, they scored five tries to our four, and they got the win." 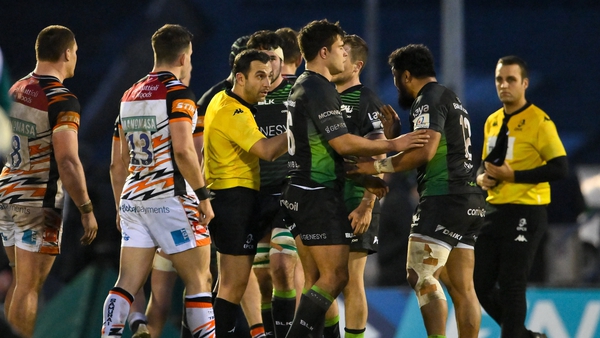