After 10 minutes at the Sportsground, it looked like Connacht would be learning some harsh lessons.

After 50 minutes it looked like one of the great days.

After 80 minutes it was heartbreak.

They'd been ripped apart in those opening minutes, coughing up penalties, going backwards in the scrum, and shipping a pair of tries to trail 0-10.

But they had stuck to their attacking principles, and when Tiernan O'Halloran crossed for the bonus point try on 49 minutes they were 28-10 in front. It had been O'Halloran's second of the day, bookending tries for Kieran Marmion and Cian Prendergast.

But this game never knew which way to turn, and Leicester - like they have done so often this season - pounced on the tiniest moments of momentum to get themselves back in the game.

With just under 10 to play, it was a four point game, and they delivered the killer blow right at the death.

Hosea Saumaki had plenty of work to do when he received the ball on the right wing, and held off the tackle of John Porch to score, silencing the 3064 in attendance.

They weren't silent for long and booed referee Mathieu Raynal off the pitch believing Saumaki's foot had been in touch. The big screen in the corner had been deceiving however. The try was good, and the game was over.

It secured Leicester the most dramatic win and books their place in the last 16, while it leaves Connacht needing a huge result away to Stade Francais next week if they want to win a first ever knockout stage.

The weather was unseasonable for January in Galway; calm and mild and playing right into the hands of the home side, who look to keep the ball alive at every available opportunity.

But Leicester thrive off penalties and Connacht conceded two within the first 90 seconds, opening the door of the cage for the Tigers.

On both occasions Borthwick's side went to touch and set their maul to work, and on the second occasion it worked, Connacht briefly stopping the maul before prop Joe Heyes picked and drove over the line for the game's first try.

Connacht were compounding errors with errors, and a poor knock-on from John Porch gave Leicester access and territory again shortly after. 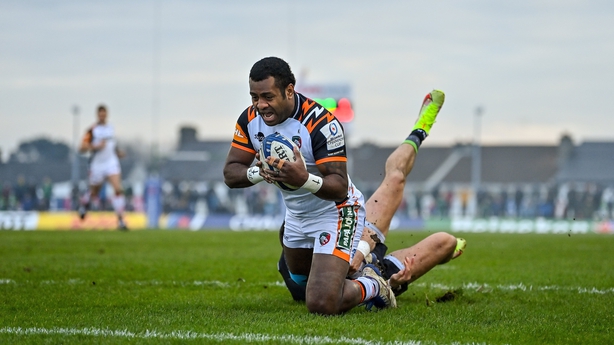 After a couple of reset scrums, Tigers captain Ellis Genge got the nudge on Finlay Bealham to create space on the open side, which Burns exposed with a beautiful crossfield kick. Kini Murimurivalu ran a beautiful line to take the ball in his stride and let his momentum carry him to the try-line.

Connacht had barely touched the ball and were 10 points behind, and it could have been more but for Burns missing both conversions.

The home side needed a settler, but in spite of the tame weather conditions both kickers were struggling with their range. This time it was Carty's turn to push a kick wide, having taken a shot at goal following a penalty won by the ever-impressive Conor Oliver. 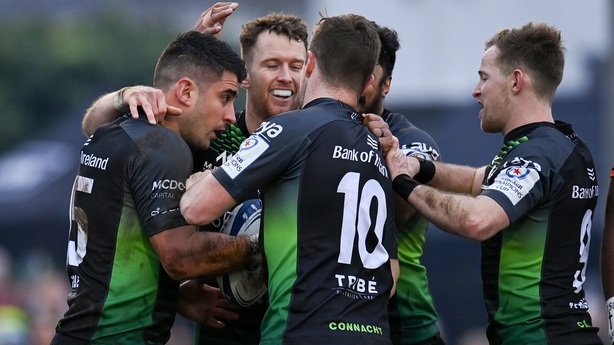 In spite of the miss, the possession eased their nerves, and they powered back into the game just after the quarter hour; another penalty was kicked to the corner and after an excellent maul they ran the hands from Carty to Healy, before O'Halloran slit Leicester up the middle to run in under the posts.

The conversion was a tap-over for Carty, and just like that it was 7-10.

It sparked a purple patch for the home side who came straight back into the 22. Leicester's discipline was failing them, conceding three penalties in quick succession, and Connacht went for the jugular, kicking each to the corner.

Leicester defended the first two brilliantly, but Connacht's determination paid off on the third attempt. They nearly lost the lineout but recovered the ball, moving back in towards the posts before Prendergast drove his way over after running an excellent line against the grain.

There had been fears of some possible crossing on the decisive phase by Bundee Aki, but after a quick TMO check the try was awarded. Once again, Carty's conversion was under the posts, and he had the simplest task of tapping it over, sending Connacht in front for the first time, 14-10. 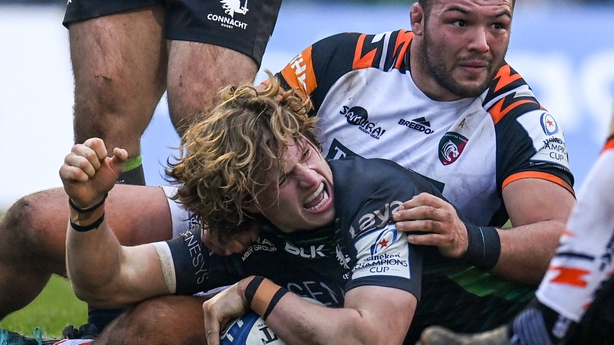 It had been a sensational first 30 minutes and Leicester came flying back, Murimurivalu shaking off several Connacht tackles to move from 22 to 22 and give the Tigers some attacking territory again.

Despite a couple of turnovers Connacht were struggling to fully clear their lines, before a huge scrum penalty on the 35 minute mark relieved the pressure, this time Bealham getting one over on Genge in what was proving to be a fascinating battle.

Again Leicester forced the Connacht discipline to break and a pair of penalties sent them back to within five metres of the try-line, but a wayward throw from Nic Dolly ended the siege and drew the half time whistle. It was a deserved break for both teams after 40 enthralling minutes.

Having missed the pace of the game at the start of the first half, Connacht came out swinging after the break.

Matthew Burke's charging run set up a penalty in front of the posts, which they again opted to kick for the corner.

It paid dividends, with Leicester's Tommy Reffell sin-binned on the following play for a cynical infringement, and from the resulting lineout a perfect throw to the tail found Prendergast. Two phases later Marmion broke to the blindside and couldn't be stopped, hammering over for a third Connacht try, Carty's curling conversion making it 21-10.

Within three minutes Connacht had the bonus point. 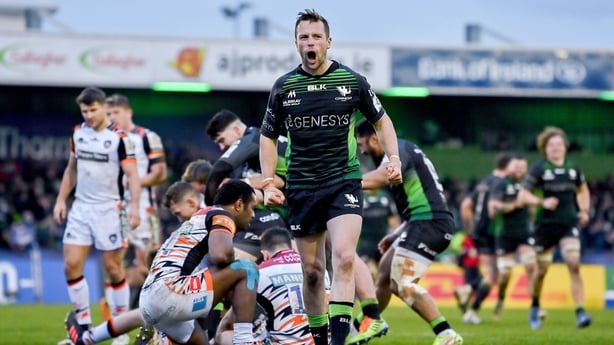 Again it started with a lineout in Leicester territory, Connacht sweeping it through the hands to Porch who had drifted off his right wing. Porch found the initial gap, with a simple pass putting O'Halloran clear to get his second and Connacht's fourth.

Murimurivalu had been a thorn in Connacht's side all game, and on 56 minutes he gave Leicester fighting chance, with his break down the left wing setting up possession close to the Connacht line, before he finished off the try several phases later.

The conversion from Burns made it 28-17. The Tigers had taken a hammering early in the second half, but were still in with a chance.

It had been a bizarre game, marked by small moments leading to periods of dominance for both sides throughout. As the second half ticked by the momentum swing back Leicester's way, who stretched the home side as they chased the game.

On 65 minutes Leicester came within inches of their fourth try, before being held up above a floor of Connacht bodies. The relief was temporary though, with Charlie Clare finishing off a powerful maul on 71 minutes to give Leicester their fourth try, ensuring a bonus point at the very least.

They could sniff victory though, the conversion from Burns sneaking inside the posts to make it 28-24 with eight minutes left.

Under Borthwick they are as ruthless as anyone in the business, and Connacht couldn't hold out, Saumaki's finish on 79:20 breaking hearts at the Sportsground, and capping off a game of the season contender.