Ulster are in a better place now to deal with their ups and down, according to prop Tom O'Toole.

The defeat to Connacht in round five led to much introspection and since returning to action following the November internationals, Dan McFarland’s men have been on something of a rollercoaster ride.

The URC victory over Leinster at the RDS was followed by defeat at Ospreys.

Then came a famous away victory in Clermont, backed up by another Champions Cup win at home to Northampton Saints, their opponents on Sunday.

Two inter-pros fell to Covid-19-related postponements over the Christmas period before last Saturday’s loss to 14-man Munster at Thomond.

It’s a setback that might have had more impact had they not chalked up those statement wins, says O’Toole.

"Each week and each and every loss and especially with your wins, you’ve got to take learnings," the Ireland tighthead prop told RTÉ Sport.

"For us, with the short turnaround, we can’t get too strung up about last week but we are in a better position.

"We’ve identified more key areas in which we need to control the game better, where we can attack better from our set-piece.

"We are more on the same page from where we were after the Connacht game.

"When you lose it’s never easy to take but for us losing at the weekend compared to the Connacht game, we’ve grown massively as a group.

"We’ve put in some big performances, Leinster, Clermont, we showed glimpses of it. It’s just being consistent every weekend.

"Every team presents a new challenge and you can have a game plan but when you are out there things change. You have to adapt.

"I think we are getting better at that compared to that Connacht game where a few questions were raised.

"This group is still growing but we don’t want to be growing forever, we want to start putting in some really good quality performances."

Ulster may be able to welcome back Robert Baloucoune but Iain Henderson, Stuart McCloskey, Jordi Murphy and Jacob Stockdale are not in the mix for the trip to Franklin’s Gardens.

Likewise, John Cooney and James Hume are rated as doubts

"I really hope we do [have them back], for obvious reasons. But I'm not particularly hopeful. They've been having scans.

"James had his hamstring tighten up.

"He felt he maybe could have kept going but with those things, as we saw with Stu McCloskey, it's not worth the risk."

Northampton bounced back to defeats to Bristol and Saracens to run in five tries against Newcastle at the weekend, with Dan Biggar kicking 17 points in the win. 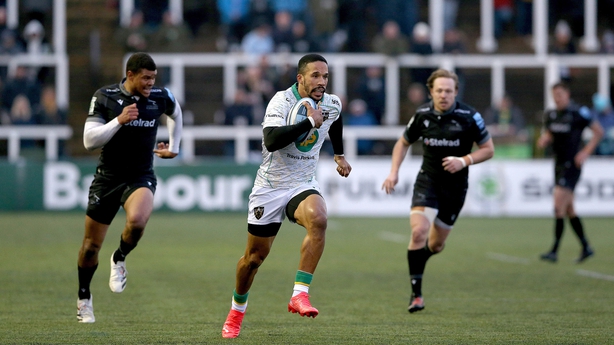 Soper is expecting a battle and singled out the Wales fly-half for special mention.

"We've looked at Northampton who are an excellent team and we've looked at the trends in how they play and things that we think that might have changed since the last time we played them," said the New Zealander.

"So we may make some small tweaks.

"But I think it's also really important that we get our own house in order.

"Particularly off the back of the weekend when we didn't perform anywhere near the standard that we would have wanted to.

"Of course we look at Saints, but we looked at them not that long ago, so this week there is a real focus on ourselves so my part in that is to try and add layers and keep improving what it is that we do, the things that are our game and try and get better in our game. That's the main focus.

"There were a lot of small things in execution, breakdown, we were a bit slow in, ball placement wasn’t great, we were trying to create momentum in the middle of the pitch to give our backs an opportunity.

"In times when we needed our backs to step up and they didn’t do that.

"We were a wee bit off in a number of areas.

"We’ve put our hand up and seen that. Hopefully we can fix them. A lot of things that have gone well for us in the last few weeks, we didn’t get right at the weekend. It’s just a lesson. We’ve got to be on it every week or otherwise you get found out.

"Dan Biggar is one of the players in the Premiership and he offers a real challenge to how we're going to play the game.

"We're under no illusions. Just because we beat them here a few weeks ago, there is no golden ticket that means it's going to happen again.

"It probably makes our job harder. It's important we prepare well and turn up knowing that this is going to be a real challenge for us."