Ulster are hopeful that Robert Baloucoune will be fit for Sunday's Champions Cup clash with Northampton but John Cooney and James Hume are doubts.

The Ireland wing injured his shoulder during the victory over Clermont in mid-December.

"Covid-wise, they all tested this morning, so we’ll wait and get those results tomorrow, I hope," said attack coach Dan Soper.

"We’ll keep our fingers crossed as we have been for weeks now.

"Injury-wise, I’m not sure if anyone will come back this week.

"Hopefully, Robert Baloucoune, he’s getting close but he’s got to get through training this week but he’s the only major change."

Iain Henderson, Jacob Stockdale, Stuart McCloskey and Jordi Murphy are among the other notable absentees with the Six Nations set to start in less than a month.

"It’s way out of my bracket as the attack coach but they are all being well looked after at the minute." the Kiwi told RTÉ Sport

"It’s really a week-to-week thing with those guys. Stu was saying last week that hopefully he wasn’t too far away.

"The medics are doing a good job but they are taking their time.

Scrum-half John Cooney was replaced early in Saturday’s defeat to Munster, while centre James Hume left in the second half with a hamstring injury. 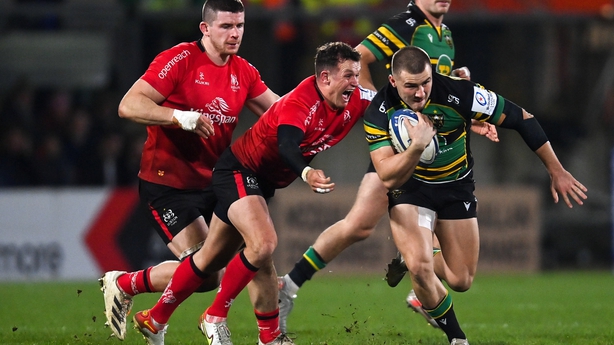 Ulster have beaten Northampton twice in the last 12 months, coming out on the right side of a Challenge Cup quarter-final last April and the Champions Cup pool-stage home game in December.

"They're a hell of a team and they play a great brand of rugby," said Soper.

"They're one of the really exciting teams to watch in the Premiership. The game here a few weeks ago was a good game with both teams having a crack at each other.

"I'd expect to see something similar. Certainly we have the intent to go out there and be positive.

"I know that's very much part of their philosophy so I'm expecting a good game of rugby."