Munster head coach Johann van Graan says his team are playing better rugby than they are getting credit for, believing some of the criticism is based on perception.

The province secured a vital win in the United Rugby Championship last Saturday, coming from seven points down to beat Ulster while playing for more than an hour with 14 men.

The win eased some pressure on Van Graan following the disappointing loss against Connacht a week previous, as attention turns to this Friday's Heineken Champions Cup clash with Castres in France.

However, there has still been criticism over their style of play, with Munster having started slowly against Ulster, needing 30 minutes to register a score.

Van Graan admits they have endured difficult patches in the last three games, but says they are playing better than they are being given credit for.

"I've said many times that this is a game of rugby, each game is different. The ebbs and flows of a game are different. We started the game against Ulster with some penalties but I thought we grew into the game really well.

"The Connacht game we were 8-3 up at half-time so that was a reverse of last weekend. The Castres game, we had opportunities. If I think back to Damian de Allende just being there, we thought that he scored the try but it wasn't awarded.. I think that might have taken us 13 points up.

"So big moments in games, we're looking for improvement week on week. As I've said before, some of our performances weren't good enough, but we're pretty happy with where we sit in both competitions. Hopefully we can deliver a performance good enough this week against Castres to get a win.

"Not a lot of teams have gone there recently and won, so it will be a massive challenge on Friday evening."

There was good news for Munster on the injury front with both Jean Kleyn and Peter O'Mahony (below) returning to training, and will be in contention to play against Castres. 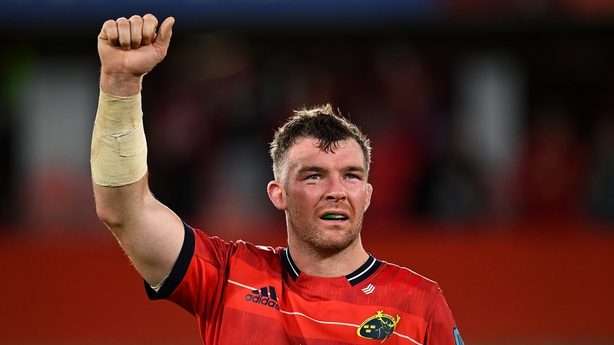 O'Mahony was a late withdrawal from the side that defeated Ulster on Saturday after sustaining a leg injury in the warm-up, and Van Graan says his potential availability will provide a bit of a selection headache across a very competitive backrow.

"Look, hopefully Pete comes through training during the week," the South African added.

"In terms of depth, Alex Kendellen has really come through, John Hodnett before he tore his Achilles last season that I said I thought he’d be close to our European 23 in future years.

"Jack O’Donoghue I thought played really well against Castres at eight, Gavin Coombes was back to his best. Coombes was unfortunate in terms of one or two things off the field in terms of Covid, he was off for such a long time but he really played well.

"Different guys in the background, Jack O’Sullivan, the Bulls game he was going to start, he is one of our better players. He had a few minutes against Castres but he hasn’t had a lot of game time.

"Jack Daly has come into it. Chris Cloete hasn’t played in a while, we’ve got Jason Jenkins and Daniel Okeke had an opportunity against Wasps. We are blessed with a very good group of loose forwards. It’s such a balancing act, you want to get, one, minutes into the group, two, you want to improve your performance and three, you want to prepare for Europe.

Elsewhere Kleyn has managed a quick turnaround from the knee injury he sustained on New Year's Day against Connacht, and is also back in full training.

Damian de Allende is still doubtful to feature at Stade Pierre Fabre, with the province saying his availability will be determined in the coming days, with Munster set to name their team on Thursday afternoon.

The South African World Cup winner is dealing with an abdominal injury picked up in training last week.

Simon Zebo is expected to be suspended for the trip to France. The winger, who yesterday signed a new two-year contract, will face a disciplinary hearing this week after his red card in the win versus Ulster.