Ireland captain Johnny Sexton will miss the final Autumn Nations Series tie against Argentina and a number of Leinster games after suffering a twisted knee and ankle in Saturday's win over New Zealand.

Connacht out-half Jack Carty has been called up in his place. The 29-year-old won the last of his 10 Ireland caps against Russia in the 2019 World Cup.

Leinster will have to plan without Sexton for their opening Champions Cup games against Bath and Montpellier on 11 and 17 December and for United Rugby Championship games either side of the European window.

"Captain Johnny Sexton twisted a knee and ankle against New Zealand at the weekend which will rule him out of action for between 4-6 weeks," the IRFU said.

"The Ireland captain will remain with the squad this week as the team prepares for the game against Argentina."

Joey Carbery, used as a replacement in the wins over Japan and the All Blacks, is likely to start at out-half with Carty and Harry Byrne as back-ups.

Munster’s Gavin Coombes has recovered from illness and will be available for selection in the back row.

Andy Farrell plans to change up his side for Los Pumas having made just one change in starting personnel in the last two weeks.

"We'll see, like I said at the start of the campaign, there might be a balancing act when it comes to people’s tanks, with injuries etc," said Farrell, whose side are on a seven-game winning run.

"So, we’ll dust ourselves down. It’s an eight-day turnaround, we’ll turn up on Monday evening and see where the land lies."

The team for the match (Sunday, 2.15pm, live on RTÉ) against Mario Ledesma's side will be named on Friday. 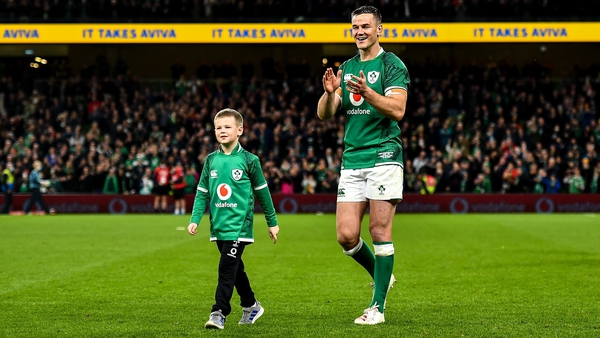