After a week of controversy and public relations disaster, this was a reminder of what Irish rugby fans want to protect, and what the IRFU need to build on.

Their 20-10 win against USA was more dogged than dominant, and their defensive stand in the final quarter spoke to the determination of a team who had their backs to the wall for five days, rather than just 80 minutes.

Beibhinn Parsons, Leah Lyons and Lindsay Peat all scored tries, and in Parsons the IRFU have a talent they can build an entire generation of women's rugby players around, if they put their minds to it.

The Galway star turns 20 at the end of this month, and given the right platform can be one of the world's elite.

Her every touch of the ball raised decibels among the estimated 2,500 fans in attendance at the RDS.

Walking into the changing rooms arm in arm following their warm-up, Ireland were lead out onto the pitch by veteran prop Peat, a nod towards an expected retirement for the 41-year-old.

They gave themselves the ideal platform, Peat and Leah Lyons were destroying their opponents on early scrums, the first of which lead to Anna Caplice breaking down the blindside before passing to Parsons, but the teenager's offload found American hands.

Parsons made up for that mistake a few minutes later, flattening her opposite winger Tess Feury in a tackle. Again, Ireland ran through the Americans on the resulting scrum, only for Considine to spill the ball when it looked like she was about to break through the US line of defence. 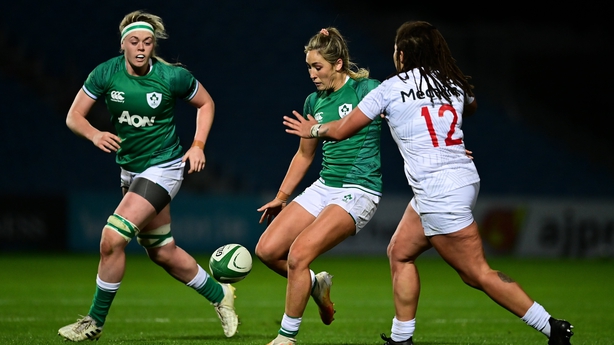 The scrum was the foundation, but Ireland were struggling to build anything on it, and should have conceded the first try on 14 minutes. Considine shot up in the defensive line but failed to make her tackle as Feury broke down the wing with a two-on-one. Feury's pass to Bulou Mataitoga was exactly what it needed to be, only for the winger to spill into touch.

It seemed like nothing was going right for Ireland in attack, but in Beibhinn Parsons they have a player who can make something happen, and that's exactly what she did on 25 minutes.

As it had been all evening, the scrum was the gateway; a powerful drive just inside their own half, before Ailsa Hughes passed left to Flood. Spotting a narrow USA defence, the out-half floated a kick into space on the far touchline, and Parsons stepped on the gas.

The ball sat up perfectly for her as she sprinted onto it, never breaking stride as she made her way to the line, sending Ireland 5-0 in front, before Flood was wide with the conversion. 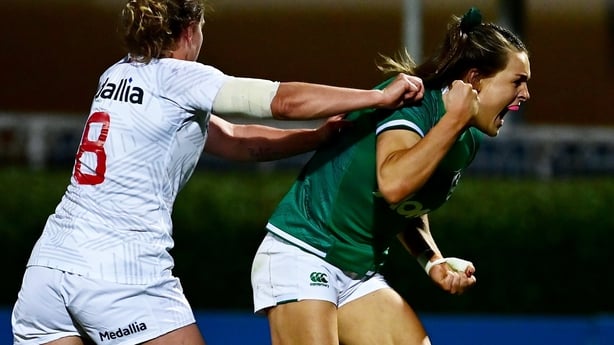 It was a moment of brilliance in what had been a frustrating half, and the frustration resumed within five minutes as the visitors leveled the game.

Hooker Saher Hamdan crossed the line before it was ruled out for a knock-on, but the USA had been playing with a penalty advantage from the preceding maul. Again they went to touch and mauled close to the Irish line, before a series of pick-and-jam efforts sucked in the Irish defence.

When they drew in enough defenders they pounced, running it through the hands for Mataitoga to make up for her earlier mistake and score.

Good pressure from USA pays off as they go wide via the backs and sweep the ball out to the right flank where wing Bulou Mataitoga touches down#rterugby #IREvUSA
📺https://t.co/BT0TXIL7nv
📱https://t.co/9iVJumCDlY pic.twitter.com/LCApUNcTtb

Ireland were determined to finish the half on a high though, and attacked sharply in the final minutes before the break. They finally got their lineout working, and won an advantage off the maul. A big carry from Nichola Fryday put the US on the back foot, before Leah Lyons wrestled her way over to score.

Flood made no mistake with the conversion, sending Ireland 12-5 in front at the break.

Another great response from USA, who display superb handling to unlock Irish defence, with Cairns on the end of the move
12-10 to Ireland#rterugby #IREvUSA
📺https://t.co/BT0TXIL7nv
📱https://t.co/9iVJumCDlY pic.twitter.com/2hBd3GhnWh

The USA landed the first punch of the second half, a wonderful try to complete a free-flowing move, offloads into the tackle from Kayla Cannett and Katana Howard before Elizabeth Cairns crashed over the line. Ireland stayed in front though, as Flood's quick thinking saw her chase down the conversion attempt. 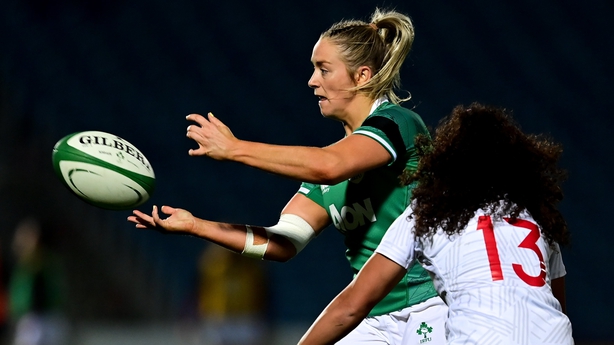 Both sides had found the pitch of the game in what was becoming a back-and-forth Test.

Within minutes, the momentum was back on Ireland's side, as Mataitoga was yellow carded close to her own line, and Ireland taking advantage immediately, Peat appropriately getting a try off the back of a powerful Irish maul.

Flood couldn't turn the seven point lead into a two-score advantage though, as her conversion drifted wide.

Cliodhna Moloney had been the centre of attention this week having called out IRFU women's director Anthony Eddy, and the Wasps hooker was tireless in her effort before her 57th minute substitution, departing the pitch locked in arms with Peat to a big reception from both teammates and fans.

The visitors continued to bring it to Ireland and as the game moved into the final quarter they were camped in the Irish 22.

Ireland were on their final warning from referee Sara Cox before a big defensive stand saw them hold the US up over the line. Shortly after they were blessed to remain in front as Feury looked to have touched down in the corner only for her final reach for the line to be ruled a knock on. Replays suggested the try should have stood, but the TMO never intervened.

Having weathered that fourth quarter storm, Ireland played the final minutes in USA territory to force a penalty under the posts.

Stacey Flood nails a penalty with the final kick of the game and Ireland have ended a tough week with a victory over the United States, 20-10#rterugby #IREvUSA
📺https://t.co/BT0TXIL7nv
📱https://t.co/9iVJumCDlY pic.twitter.com/x4EHGZWzlM

Flood split the posts with it, drawing the final whistle and a celebratory huddle from the entire Ireland squad, including outgoing coach Adam Griggs.

It had been a long week. 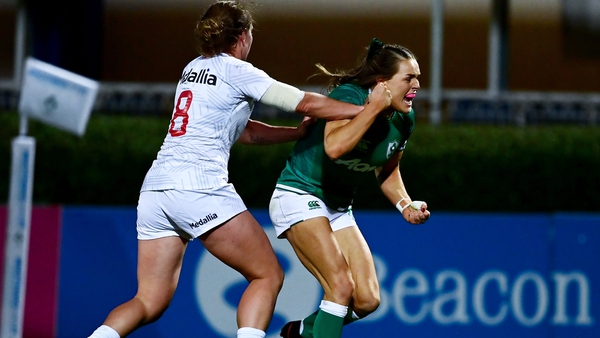