New Zealand scrum-half TJ Perenara says he's looking forward to being reacquainted with Ireland's Jamison Gibson-Park this Saturday when the sides meet at the Aviva Stadium.

The pair spent a season as team-mates at the Hurricanes in Super Rugby in 2016, in between Gibson-Park's spells at the Blues and Leinster.

Gibson-Park left Wellington after one season to move to Dublin, before qualifying through residency rules and making his Ireland debut in 2020, winning 11 caps to date.

He looks set to retain the number nine jersey for Saturday's visit of New Zealand to a sold-out Aviva Stadium, and Perenara says it will be a "pretty cool moment" to line out against his former team-mate.

"He was an awesome player to play with and play against when he was in New Zealand.

"I was lucky enough to play alongside him at the Hurricanes. And to be fair, he was one of the most gifted players I ever played with.

"And everything as well. I mean like everything that guy touches often turns to gold. To see him come over here and be both successful at the club level and the international level has been awesome.

"And obviously the way he played at the weekend was fantastic, and the way he has been playing over the last four years. It's been awesome to see.

"He really deserves his spot in international rugby. And hopefully if we get the chance to play against each, it will be pretty cool.

"So if we get the opportunity to square up against each other in the game then it will be cool to experience that, not only because it's awesome going against such a player and a mate like that, but just to be, like, man we were both kicking it in the locker room at Rugby Park at one point and now we're on the international stage at the Aviva, going up against each other.

"That would be a pretty cool moment."

New Zealand come into the game off the back of a busy 2021 schedule, which has seen them play 13 times since July, winning all but one of those games.

In Foster's side have enjoyed three large victories on their northern hemisphere tour to date, the most recent being a 47-9 win against Italy in Rome last Saturday.

We have noticed that the ball is being kept alive a lot more. Some of the tries they are scoring from all over the field

Saturday's meeting will be the first between Ireland and the All Blacks since the 2019 World Cup quarter final, but is also the first of four games between the sides in the space of nine months with Ireland dur to travel to New Zealand for a three-Test series next summer.

"I’ve seen bits and pieces of them for previewing obviously this week," Perenara said.

"To be fair, they’ve been a quality side for a long time now. So we know each time we play against Ireland, the physical battle firstly, that we’re going to come against is second to none.

"And then what I’ve also noted that they’ve added to their game is the ability to keep the ball alive. That is something that, I don’t know if it has been a clear focus for them, but we have noticed that the ball is being kept alive a lot more. Some of the tries they are scoring from all over the field, some of the line-breaks they are making, it’s pretty special to see.

"They’ve got some athletes in their environment and then when they get the ball in space, they’re tough to spot." 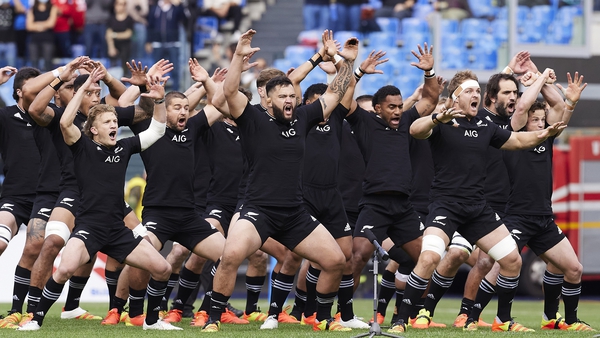