Andy Farrell is entitled to enjoy what was an impressive victory over Japan yesterday at the Aviva.

His Ireland side ran in nine tries, restricted an erstwhile tricky Japan side to a solitary touchdown, while enjoying 64% possession and 69% of territory.

The 2019 defeat in Shizuoka is not easily forgotten but since that World Cup Jamie Joseph's side have played just four games and the Brave Blossoms bore little resemblance to their true selves.

A greedier man than Farrell, whose side have now won six of their last six, might have wished Saturday’s foes had provided a stiffer test, given that New Zealand, 47-9 winners over Italy yesterday, are the next visitors to Lansdowne Road.

Towards the end of the game, when Japan began to enjoy slightly more possession, Ireland racked up many of their 91 tackles but, in truth, the hosts' defence wasn’t tested.

A very satisfied Andy Farrell said it was important to remember the milestones achieved by Tadhg Furlong and Dan Sheehan as well as Johnny Sexton's. pic.twitter.com/Pj98jR4u65

"As we all know a game takes its own course," the Englishman, who has no immediate injury concerns in the squad, told RTÉ Sport after the 60-5 win.

"By a country mile the best part of our performance today was our defence.

"We didn’t have to do much of it and that is what we want but we got the ball back very quickly because we were ready on turnover.

"They are lethal, Japan, on turnover ball; that’s what they pride themselves on, that and counterattacking.

"We all know how dangerous they have been. Once you go after a team and force a few errors and they know that is the point of difference, then it doesn’t feel right to them."

"Our attitude was in the right place for what we were bracing ourselves for, an unbelievably tight game, and that's why we're so pleased with the performance because of the outcome.

"I thought when you look at Japan's side, they've been together for quite some time and they've always been a side that has made massive progress and that's why I was so pleased with our defence and set-piece, we didn't let Japan play the game that they wanted to play.

"The pleasing thing is that the first week we came together we worked extremely hard.

"This week the players really took ownership of what we wanted to achieve. There are some good pictures for us to push forward with for next week against New Zealand as well." 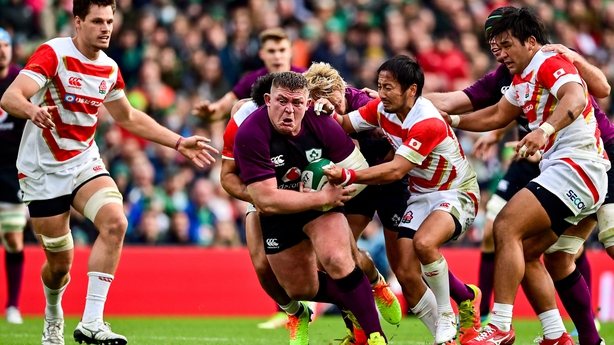 Japan coach Joseph was generous in his praise for the victors, while admitting that his side were far from their best.

"They were really good in the set-piece and it started from there," he said of Ireland.

"We spoke about in our preparation about how if that happens one or two times, it’s really hard to win a game. And then you have yellow cards and it becomes really impossible.

"The Irish team played very well, put us under pressure at set-piece and they were playing for one of their brothers, Johnny Sexton with a nearly full stadium and knowing the All Blacks are coming next week.

"We were on the receiving end of that and we need to get back up again because we’re on tour.

"We’re a good bit behind with the pandemic and this is our fourth game in two years.

"We’re clearly behind and we didn’t play the first year after the World Cup. 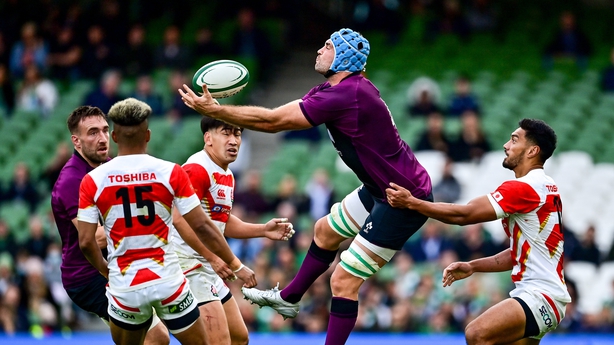 "The challenge is to get a look at players. We’ve got five guys injured and loosies playing in all sorts of positions which compromises our ability to play, especially against strong teams like Ireland.

"We have challenges with what happened in Super Rugby but this team is my challenge."

Asked if he thought Ireland’s showing would be enough to cause his native country some problems next week," he said: "It’s going to be a hell of a game.

"It was clear that the intent of the Irish defensively, they will be ready for a great game of rugby in seven days' time."

Follow Ireland's November internationals v New Zealand and Argentina via our live blogs on RTÉ.ie/sport or the RTÉ News app, or watch live on RTÉ2 and RTÉ Player. Live commentary on RTÉ Radio 1.