Perhaps we had talked Japan up.

After their defeat of Ireland in the 2019 World Cup, and their recent visit to Dublin in July, we had become accustomed to an energetic style of play that tested defences and burned out lungs.

But this Japan team arrived to Dublin in pre-season mode, with the Top League yet to commence and the players depleted of match-sharpness.

Ireland beat what was put in front of them, and they beat them well; 60-5 on the scoreboard, a hattrick of tries for Andrew Conway, and one each for James Lowe, Jamison Gibson Park, Bundee Aki, Garry Ringrose, Cian Healy and the centurion Johnny Sexton.

The intent was there from the start for Ireland; linebreaks met with options on either shoulder, forwards running at spaces and not faces, keeping the play alive as often as they could.

It was attacking rugby, and clinical execution, but the big question is whether or not those same choices will be made in seven days time, when New Zealand present a greater, stronger, faster challenge, when the time to make decisions falls by a fraction of a second.

Sexton's 100th Irish Test cap went like a dream as he scored his 15th Irish try, drawing a standing ovation, and a rare, in-game, beaming smile from the legendary out-half.

The captain played 61 minutes before being replaced by Joey Carbery, proving again why even at 36-years-old he's still Ireland's beating heart.

Lowe had been one of Ireland's livelier cariers in the opening minutes, and the Leinster wing marked his return to the Irish side with the opening try on four minutes. 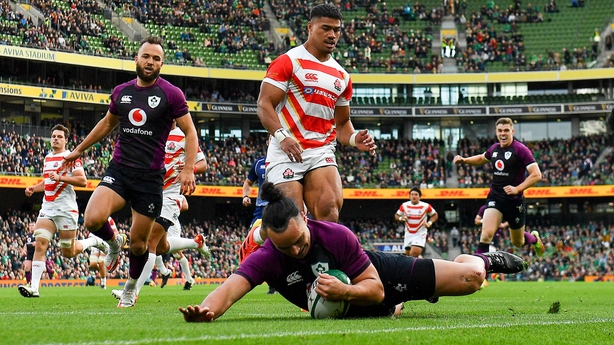 Gibson-Park had targeted a stacked blindside 40 metres out, passing to Aki who got on the outside of a Japanese defender. From there it was simple hands from Aki to Conan and Conan to Lowe, as he sprinted down the touchline to score.

The touchline conversion proved no match for Sexton, who was up and running.

The second try on 11 minutes was sublime, and an indication of fast, reactive, instinctive style of rugby we've been promised for a couple of years.

Much had been made of Ireland's ball-handling, mobile pack, who contributed heavily as Ireland swiftly moved from left wing to right wing before Conway dived over in the corner.

It started when Lowe kept the ball in play on the left touchline, offloading over his shoulder to Sexton. Shortly afterwards it was Tadhg Furlong who flicked a pass out the back door to his captain, before Tadhg Beirne and Josh van der Flier's midfield offloads landed in the hands of an on-rushing Aki.

Here is that stunning Andrew Conway try that put Ireland into a wonderful position early on.

A quick ruck later, Gibson-Park's delicate grubber was dived on by Conway completing a score of unstructured beauty.

It was an 11th Test try for Conway on his 26th appearance, and his 12th soon followed this time born from a well-executed first phase strike-play.

Setting up a maul off a lineout in the Japanese 22, Gibson Park skipped Sexton to find Aki running a direct line down the throat of the defence. Resisting contact, Aki popped the ball back to Sexton, as the red and white defenders were sucked in.

Sexton's threw a wide pass to his right to Hugo Keenan, as the full-back whipped the ball out to Conway on the touchline, as the Munster man charged over for his second try of the game.

After slotting his first two conversions from the touchline, Sexton was off target with his third, but kept Ireland's lead ticking over with a simple penalty just after the 20 minute mark, as Ireland's lead stretched out to 22-0.

The visitors looked a million miles off the side that caused Ireland so many problems in July, although understandably given their season is only set to begin in the coming weeks. 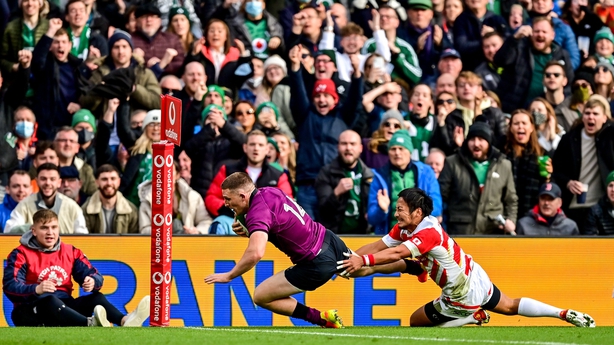 However, Ireland's intent was impressive. When a ball-carrier broke the gainline, they invariably had options both left and right, as Ireland's loose forwards constantly made themselves available.

They looked threatening every time they attacked, and the fourth try of the day inevitably arrived on 34 minutes, Ringrose sniping off the back of a ruck and offloading to Gibson-Park who was lurking over his shoulder to run in close to the posts, giving Sexton a simple conversion to make it 29-0.

Sexton had been sharp in the opening half, distributing efficiently, dictating the play and kicking four from five, and he ensured his milestone appearance would also be a try-scoring one early in the second half.

After Keenan's excellent 50:22 gave Ireland a lineout in Japan territory, they once again mauled it after hitting Ryan at the tail. As the maul drifted infield, it created a large blindside which Sexton sprinted towards, crashing over the line after Gibson-Park's pass. 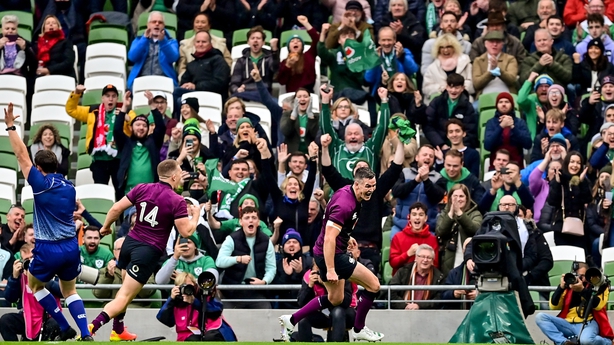 It brought the biggest cheer of the day, and a prolonged standing ovation from the Aviva crowd, before Sexton composed himself to split the posts with his conversion.

He played his part in try number six before his departure, a neat pass to Furlong, who again showed his wonderful handling skills to offload to his fellow prop Andrew Porter, before Ireland ran wide with the ball for Aki to get his name on the scoresheet.

What an ovation for the centurion Johnny Sexton as he caps his big day with Ireland's fifth try. What a moment for the player.

The benches began to empty, as Japan finally scored a try, Siosaia Fifita diving over in the corner after a rare foray into Irish territory.

Among those to enter was Dan Sheehan, the Leinster hooker making his Ireland debut, getting a 25 minute hit in a stress-free environment, an making one excellent linebreak to get Ireland into Japanese territory.

Sexton left the game on 61 minutes to a chorus of cheers, soaking up his walk to the sideline. Joey Carbery couldn't run on quick enough.

What an ovation for the centurion Johnny Sexton as he caps his big day with Ireland's fifth try. What a moment for the player.

The Munster out-half had 19 minutes to make an impact and showed some reasonable touches. His kicking looked sharper than it had been in the URC, but a penalty conceded close to Japan's line will sting him after he overplayed his hand while isolated.

Japan looked lifeless at times, and conceded their seventy try of the day as the clock hit 70 minutes. Ringrose was the first receiver off an Irish scrum and simply ran through the defence to touch down.

Not long after, their defence sunk to new depths as Conor Murray grubber kicked to the right corner, and the Japanese cover lost track of the ball to allow Conway complete his hattrick.

There was still time for Cian Healy to burrow over with the final play of the game.

It was Ireland's ninth of the day. New Zealand, it's fair to say, will provide a tougher challenge. 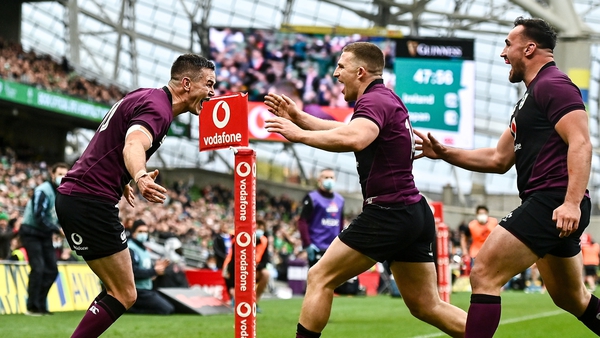