A common theme among pundits before the start of the United Rugby Championship was about the need for the South African teams to make a fast start.

In a way, they have; in most of the eight games played by the league's new teams, they've come bouncing out of their corner.

But more often than not it's been an early flurry of uppercuts and haymakers while their opponents weather the storm and establish their jab, the fight having turned into a formality by the time the championship rounds arrive.

When the pundits asked for a fast start, they weren't asking for something unreasonable.

Generally speaking, it was about letting the league know they'd arrived.

The Bulls weren't expected to beat Leinster at the Aviva Stadium in round one, but we expected them to provide trouble and to rough them up and to lay down some sort of a marker that even if the South Africans were to ship some defeats on their European tour, at the very least you'd have to be at your best to beat them.

In the end they looked a mile off the standard of the defending champions, whose own coaches were quietly worried about being undercooked, such was their small pre-season campaign.

The opening two weeks of the URC have shown us that we're going to have to play the long game with the South African teams.

The optimists in the bunch had been hoping that coming off the back of the Currie Cup and Rainbow Cup, the Bulls, Sharks, Stormers and Lions would have enough good miles on their clock to offset their missing Springbok contingent, and could hopefully catch off guard the existing Pro14 sides who might still be getting up to speed on their seasons.

Half of that situation has played out, with all four sides showing glimpses of their talent across the eight games, but the lack of a single 80-minute performance is definitely a cause for concern so early in the season.

Of the eight games played so far, their combined record reads as one win and seven defeats.

Of the seven defeats, just one has been close enough for them to pick up a losing bonus point, the remaining six defeats were all by 11 or more points.

In six of their eight games they've conceded at least four tries to give their opponents a bonus point.

In just one of their eight games have they scored four tries themselves.

Worryingly, rugby statistician Russ Petty has been grinding up the numbers, and their average scoreline is matching up similarly to figures the Cheetahs and Southern Kings would have provided in their seasons of Pro14 rugby.

Breaking those down further and the pattern is of teams who are running on empty in the second half of games.

Their points totals are stacked heavily in the first half, with just 48 of their 138 points coming after the break, an average of just six points per team per second half performance.

If you're somebody who decries the numbers game that is modern sports, it pretty much stacks up to what we're getting on the eye-test too.

In the opening game of the tournament, the Lions looked electric against Zebre, capable of scoring every time they touched the ball. Jordan Hendrikse looked (and still looks) like a real talent and Rabz Maxwane was as lethal as he'd ever been with the Cheetahs in his Pro14 years.

But after going 38-0 in front early in the second half they fell apart, shipping 26 unanswered points and looking mightily relieved to get out of Parma with the win.

In both of their games so far, the Stormers have looked like two different teams playing one single match. In round one against Benetton they led 18-7 early in the second half and were dominant, before their tank ran dry by the hour mark.

Their performance against Munster on Saturday was an exaggerated version of that defeat in Italy, playing arguably the best rugby of anybody in the competition for the opening 35 minutes, before conceding four tries in the space of 16 minutes of game time.

We predicted the Stormers would blow hot and cold. We weren't really expecting it to be as dramatic as it was on Saturday though.

Against Munster they looked aggressive and organised early in the game, but dropped their heads as soon as Craig Casey got the home side's second try of the match.

Their round two defeat to Glasgow was one of the few cases so far where a South African team looked better as the game wore on; although the sight of Curwin Bosch lining up a long-range penalty kick at goal while his side were 35-10 down early in the second half was one of the more baffling moments of the weekend.

Still though, the thoughts of what they can do with Siya Kolisi, Makazole Mapimpi, Trevor Nyakane, Ox Nche, Sbu Nkosi, Lukhanyo Am and Aphelele Fassi is enough to keep them out of the burn book for the time being at least.

And that brings us on to the Bulls, arguably the biggest disappointment of the URC to date.

Pre-tournament, their recruitment policy seemed to be canny, as they brought in several veterans who had lots of experience with northern hemisphere rugby, as well as director of rugby Jake White.

But as Connacht and Leinster showed in the opening two games, if you can live with the physicality and get those monstrous forwards moving around the pitch, their energy levels sap.

Sitting in the Clan Terrace media box on Friday night, the proximity to the Sportsground pitch was such that I was grimacing with each and every hit, as Connacht players sling-shotted themselves into contact and threw themselves at the Bulls' ball-carriers, with each and every tackle drawing a dull, terrifying thud.

It was fierce and it felt like this was exactly what the league had been crying out for; Test match intensity in the Sportsground on an October Friday night.

It was brilliant, but it only lasted 40 minutes. After that, the Bulls had nothing left. They looked lost in the sideways rain of Galway Bay and barely left their half in the second period.

Afterwards, White demanded they learn to adapt to their surroundings.

The worry is that it may take a year for the Bulls, as well as the South Africans, to adapt to the weather and playing style and referee interpretations of European rugby.

It's likely they will still prove formidable at home, but the success of this cross-border competition depends on how well they do in Europe, rather than how well the European teams do in Africa. 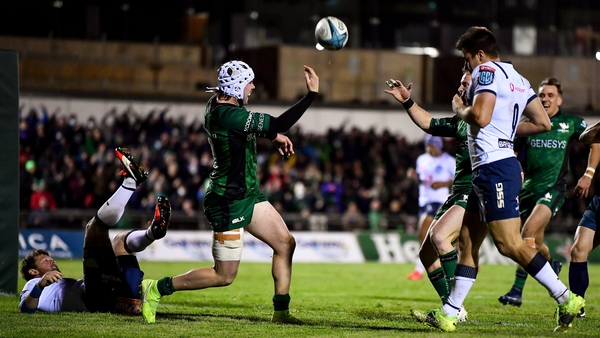