Conor Murray's recall for the Lions is a sign that Warren Gatland is expecting the Springboks to come out firing as they bid to level the series.

The Ireland scrum-half was a surprise omission from the starting XV for the opening Test, but replaced Ali Price with 17 minutes left, immediately after the Lions took the lead for the first time, as the tourists held on for a 22-17 win.

The duo have switched jerseys for the second Test and Gatland outlined his reasons when speaking to reporters earlier.

"He was good when he came on," said the New Zealander of the 32-year-old Munster man.

"The way South Africa tend to play, if we look at the two games, the 'A’ game and [last weekend's] game, they try to build the scoreboard, they try to get in front and look to hold on. 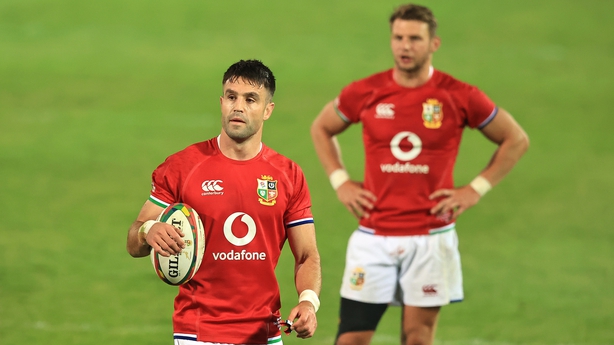 "That first 20 or 30 minutes is pretty important for us and then we have been happy with the way we have finished in the second half of both those games and felt strong.

"Potentially the game might open up, the tempo of the game, which is something we think Ali can bring maybe in that second half, and the same with the other players that are on the bench."

The visitors, who turned around a nine-point half-time deficit last Saturday, can expect nothing but an early onslaught with the wounded World Cup winners in do-or-die territory.

"They are going to be desperate, aren’t they? I’ve spoken to the players about that," said the former Wales boss, who also kept Ireland players Tadhg Furlong, Jack Conan and Robbie Henshaw in his starting team, as well as including Tadhg Beirne on the bench again.

"We’ve got to make sure we are mentally right. We must make the most of the opportunity we have created by winning the first test and hopefully settle a series victory on Saturday.

"They are going to be incredibly aggressive and it’s about staying in that arm wrestle.

"We gave away a number of penalties in that first half but in the second half we were much more disciplined.

"We were pleased with our control of the game.

"We probably, at times, put ourselves under a bit of pressure by shifting the ball on occasions, getting caught behind the gain line and allowing them to get some breakdown turnovers.

"We’ve just got to be really smart in terms of game-management but I thought we were outstanding in that second half."

"The backlash wouldn’t be that South Africa would play in a more physical manner per se, it’s just that they can probably fix the things that the Lions managed to use to get access into the game," the former Ireland skipper told RTÉ’s Today with Claire Byrne.

"I would never have foreseen that the Lions would score a maul try against South Africa but they did.

"I would never have foreseen that they got the dominance in the air whenever the Lions kicked like they did.

"It will be a different second Test, I’d imagine."