Ireland duo James Ryan and Ronan Kelleher hailed the impact of the eight debutants who contributed to a 71-10 victory over USA at the Aviva Stadium.

Robert Baloucoune and Nick Timoney scored tries on their first appearances in the green jersey, while Tom O'Toole, James Hume, Paul Boyle, Caolin Blade, Fineen Wycherley and Harry Byrne all made their debuts in a much-changed side.

Kelleher scored four tries of his own in a Player of the Match performance but the Leinster hooker was keen to highlight the way in which the newcomers made their marks.

"Most importantly it was for the team. Eight new caps today and every single one of them put their hands up to be in future camps and I thought they were all outstanding today," he told RTÉ Sport, with captain Ryan adding: "They all made a really good account of themselves. They all got stuck in."

Four-try hero Ronan Kelleher was named Vodafone player of the match as Ireland swept past the USA #IRLvUSA #rterugby pic.twitter.com/K1ETXLTVMG

Kelleher, who trained with the British & Irish Lions in Jersey as cover last month, added that on a personal level he was motivated to try and increase his chances of cementing a hold on the Ireland number two jersey.

"I really enjoyed my week out in Jersey with (the Lions) but I came back in here with a job to do in these two games and I was really looking forward to trying to stake my claim for the number two jersey."

The 23-year-old also praised the support with 6,000 spectators in attendance at the Aviva Stadium.

"Last week as well with 3,000 it was incredible, just great to see them again and very enjoyable out there," he said.

Ireland captain James Ryan hailed the contribution of the debutants as the USA were swept aside #IRLvUSA #rterugby pic.twitter.com/a4HNEyY4Vv

Ryan, who captained Ireland for the second successive game in the absence of the rested Johnny Sexton, echoed his Leinster colleague's praise of the crowd and felt Andy Farrell's side had grown into the game after a slow start.

"We probably struggled a bit in the first half at times, just the pace of the game with a number of new guys coming in and that's international rugby for you," he said.

"But second half, we're really proud of the effort and delighted to finish off with a result like that.

"As I said during the week, we wanted to go one step forward and we didn't want to go backwards and I felt second half we finished really well.

"I really enjoyed that 6,000 here. It felt like 60,000 to us. The support was incredible so delighted to be back at home with the supporters as well." 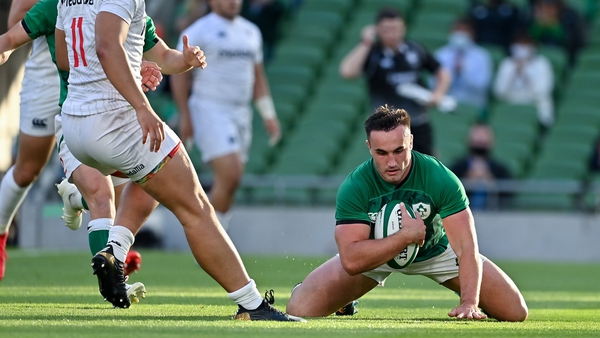