Bundee Aki says the support he's received from Galway and Connacht has been fundamental to his Lions call-up.

Having left New Zealand in 2014 to play with Connacht and ultimately Ireland, selection for the British and Irish Lions marked another milestone in his rugby career.

"I wouldn’t be where I am now if it wasn’t for the help of the community," he told RTÉ Sport.

"When I first arrived they made me feel at home, the support that we’ve had from the day we arrived here in Galway, the organisation here in Connacht who have been so good to me.

"A lot of people have been sending me stuff here and there, it’s overwhelming to have that effect on this small community, and it just shows how tight Galway is.

"Connacht might not be as exposed as the other top provinces but it just shows that, as a tight group, anyone can still do it and anyone can get to where they want to be.

"I’m just so grateful for the support" 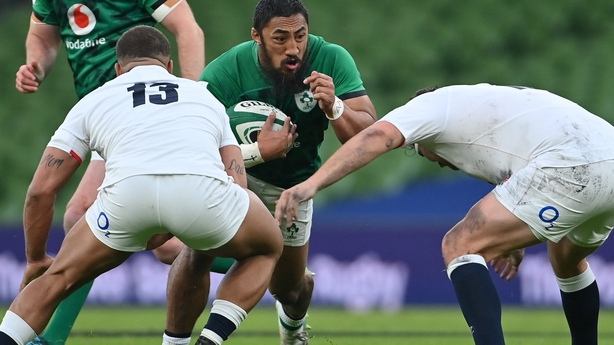 The 31-year-old also revealed there were tears shed when he was named in the squad for the upcoming tour of South Africa.

"I was pinching myself, it’s a huge honour," he said.

"I called my wife, shed a few tears on the phone, went home, shed a few more tears. Just for the sacrifices we’ve done as a family to get to where we are at the moment.

"I called my mam and dad, they couldn’t have been happier or more proud of what I’ve achieved since I left New Zealand."