Toulouse reached the final of Europe's premier club competition for the first time since 2010 with a comprehensive home victory over fellow French side Bordeaux-Begles in the Champions Cup semi-finals.

Matthis Lebel and Antoine Dupont scored tries and Romain Ntamack kicked the other points to set up a final against La Rochelle or Leinster, who meet in France on Sunday.

Bordeaux-Begles, playing their first semi-final in the competition, responded with penalties by Matthieu Jalibert but lacked the inspiration to threaten the Top 14 leaders.

Toulouse, who share the record of four titles with Leinster, will play in their seventh final on 22 May at Twickenham.

"We were a bit tense playing at home, we played very cautiously in the first half, it was hard to play because of tough conditions," Ntamack said.

As rain and wind swept the field, Lebel beat two tackles to touch down on the right wing and give Toulouse a 5-3 advantage after a Jalibert penalty. 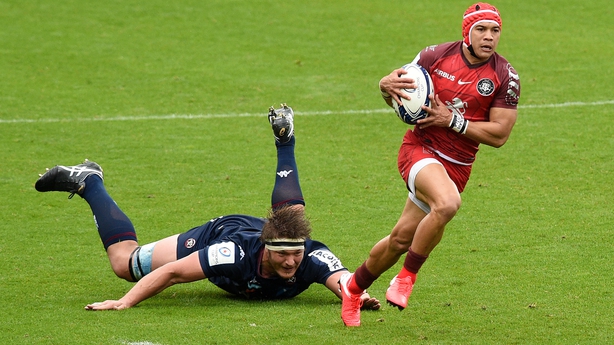 Jalibert added another three points, which Ntamack cancelled out with a penalty of his own to put the hosts ahead at halftime.

Toulouse maintained the pressure after the break, forcing Bordeaux to concede penalties and Ntamack slotted two to put his side 14-6 up with 15 minutes left.

Jalibert gave Bordeaux a lifeline as he kept his cool to slot over a 40-metre penalty, but France scrumhalf Dupont sealed the win with his 17th try in 24 competitive games after being set up by Zach Holmes.

'In many ways, the players are more in sync with Ross'