Ross Byrne is used to operating in the shadows.

Since making his debut against Edinburgh in September 2015, in Leo Cullen's first game in charge, Byrne has been the able deputy to one Johnny Sexton.

The Ireland captain's commitments and injury profile has meant that opportunities have been plentiful for Byrne over the last six years.

And he'll hit a century of club appearances when he lines out for Leinster in tomorrow’s Heineken Champions Cup semi-final against La Rochelle.

Sexton, once more, misses out having failed to work his way through the head injury return to play protocols in time.

The HIA against Exeter in the last round was his third since February and Leinster are in no hurry to rush him back.

Tempting as it might have been, as with Caelan Doris and James Ryan, the four-time champions don’t operate like that.

It helps when you have someone like Byrne to steer the ship.

Just like he did when replacing Sexton early in the win over Exeter at the Aviva in December 2017.

Just like he did in the 2019 quarter-final against Ulster, scoring 16 of 21 points in a three-point victory.

And just like he did when his starting out-half was again forced off in the quarter-final win three weeks ago against the defending champions on their home patch.

"Ross has justified his selection with some great performances in big games as well," said Leinster boss Cullen, who also preferred the 26-year-old to Sexton for the recent Guinness Pro14 final victory over Munster.

"It’s just another big game for him. It’s not like he’s never played a big game before.

"He’s hungry to be successful.

"I think back to that lockdown period...and how players used that window. He was one of the players who came back in great shape.

"You can tell a lot about characters when they are on their own and what they do in that time so he’s got great drive." 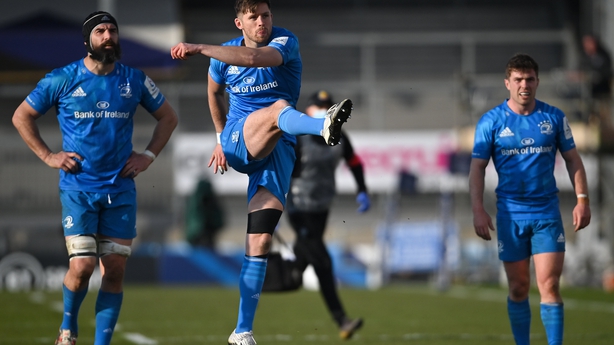 Sexton's unique personality makes comparisons with the rest of his rivals difficult, but Cullen says that Leinster can lean into the fact that the two-tour Lions out-half's absences have paved the way for Byrne to direct proceedings in the 10 shirt with very little slippage, as evidenced in the win over Exeter, in their performance level.

"Yes and no, there are little nuances to the way both play and lead the team," Cullen told RTÉ Sport when asked how much Sexton’s absence from the game changes their approach.

"Ross has played lot more minutes in the last three or four seasons than Johnny because Johnny had more international minutes.

"We’re beneficiaries of one of those guys coming back [from Ireland camp]. When Ross doesn’t get picked, he’s with us and it’s great.

"In many ways, the players are more in sync with Ross because he has played more games.

"Obviously, Johnny over a long period of time [is more attuned]. It depends how long you want to look back but we’re lucky to have the two of them here. 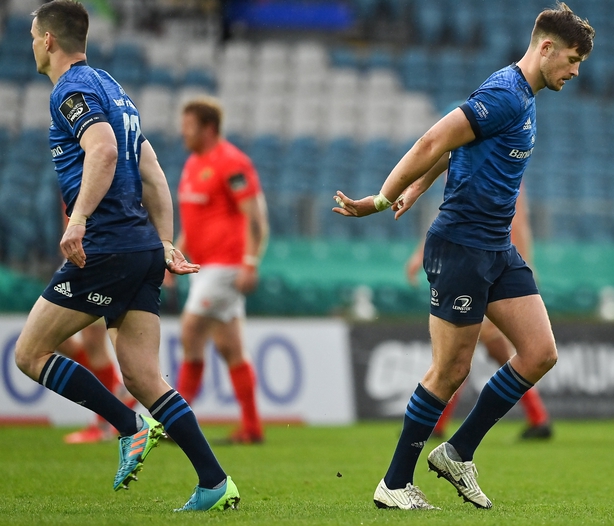 "Ross has been a bit more on the periphery with Ireland and he is more ingrained in what we do in Leinster.

"It’s fairly subtle, some of these differences. It’s not like one is right and one is wrong. Ross has a very, very clear picture in terms of what the team is trying to do here."

Byrne, who will make his 28th European appearance tomorrow, is also among a queue of hopefuls aiming to replace Sexton on the international stage when the 35-year-old decides to hang up his boots.

He faces competition from Ulster's Billy Burns and Munster’s Joey Carbery and admits that his career in green has been "pretty frustrating".

The St Michael’s College graduate, who stands 6'4" and weighs in at over 14 stone, has earned 13 caps with just two starts.

And as much as the professionals like to say they want to test themselves against the best, those two starts came away to an England side in no mood to play nice and he has suffered due to the nature of those defeats.

That his team-mates were completely off the pace in the 2019 World Cup warm-up and Autumn Nations Cup in 2020 didn’t help Byrne.

"It is frustrating when you get a start and it doesn’t go well and then you don’t get another start for, I don’t know how long, a year if not more.

"And then you are in and out of the team, whether you are on the bench or not and you feel like you are not getting much of a chance. And then if you do get a chance and you think it goes well, you are not staying in the team.

"It’s something I've have through my career so you have to look at yourself and try and improve."

Byrne, who also faces competition at Leinster from younger brother Harry, doesn’t give much away in interviews but has admitted that he has matured with age, something that will stand to him in the Stade Marcel-Deflandre tomorrow.

"When it comes to the game I try to enjoy it as much as possible which is something I definitely didn’t do when I was younger," he said.

"When I was younger, probably certain games, I was a lot more anxious and kind of thinking, 'God, let’s just get through this next moment’ whereas now I’m probably trying to enjoy it a lot more.

"The big games are something I’ve always enjoyed because when I was younger that was the reason I wanted to play professional rugby."