The Westerners are away to the two-time European champions, who are mid-table in the Aviva Premiership, and Friend sees them as a familiar challenge.

"If I was to liken Leicester to a team in the Pro14 it would probably be Munster. Very similar," he told RTÉ Sport.

"They like to play in the right areas and get penalties that gives them access into the 22 and they've got a very strong set-piece that tends to maul you across the park or over the line.

"Our intention is not to do that. If you go back and watch both our Munster games, the one we lost at the Sportsground and, more importantly, Thomond Park, where we missed out by three points, it was pretty good.

"We didn't get the job done in the end but we were oh so close and we’ll be better again having played that style of rugby.

"You need to respect their physicality and their size so we don’t want to get in an arm-wrestle with them. We want to move them around.

"We’ve got a gameplan that we believe can beat them, it’s now up to us to take it to Welford Road and put it in place." 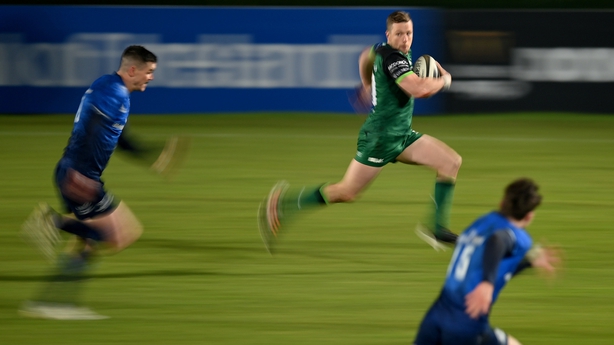 Friend wants to see a similar attitude, in possession and without, to that which saw them end Leinster's unbeaten run in January.

"Work-rate is going to be really important. We’ve got to out-move them so we’ll see after 15-20 minutes, regardless of the score, whether we’re up for that fight.

"When we beat Leinster up at the RDS we outworked them early and we got some scores on the board. Then they had to chase.

Connacht will be without suspended pair Bundee Aki and Jarrad Butler while Ireland lock Quinn Roux is injured.

Friend believes it is an opportunity for the larger squad to rise to the challenge and take a step towards a first European final.

"We've got other quality and that’s what we’ve been building over these last three years, a quality squad that when certain blokes drop out, other players get their opportunity to step up," he said. "To a man, they tend to take that opportunity on board.

"Leicester are a very good side and we're heading to their home turf.

"One thing in our favour, our away form has been good this year. But this is a different challenge, this is knock-out rugby, up against a team that I think is starting to find real form.

"There is pressure on the game. We want to win silverware. Connacht’s history against  English sides hasn’t been great but we have an opportunity to correct that... and to show the growth that I believe has taken place here."