Connacht won in Dublin against Leinster for the first time since September 2002 as fly-half Jack Carty masterminded a seismic bonus-point win over Guinness PRO14 kingpins at the RDS Arena.

Itching for an Ireland recall, Carty scored 25 points to end Leinster's proud 26-match PRO14 winning run. It was their first home defeat to a fellow Irish province in more than five years.

The player of the match touched down twice and kicked 10 points as Connacht, stung by last Sunday's home defeat to Ulster, galloped into a 25-5 half-time lead.

Alex Wootton's late try had cancelled out Scott Penny's lone score for a much-changed Leinster, who had lost the returning Jonathan Sexton to a failed head injury assessment.

The visitor's promising start was rewarded in the eighth minute when Carty picked off Ross Molony's high pass and raced clear to score from 55 metres out.

Carty's conversion was followed by a 12th-minute penalty miss, but the Athlone man was soon over for his second try. Having combined with Caolin Blade on a speedy break, he then bundled his way over with support from Quinn Roux.

Now 12-0 down, Leinster steadied themselves despite Sexton's untimely departure. McGrath exploited some space around the fringes and sent flanker Scott Penny over for his sixth try of the campaign.

The conversion was nudged wide by McGrath, though, and Carty strung through back-to-back penalties, the latter one rewarding John Porch for hunting down Jimmy O'Brien, who had shifted to number 10 in a makeshift Leinster backline.

Within reach of the interval, Connacht's aggressive defence put them back into try-scoring range and winger Wootton was released for the left corner with Carty converting with aplomb.

McGrath sniped straight through from a ruck, barely three minutes into the second period, and although O'Brien converted, Carty swiftly hit back with his third successful penalty for a 28-12 scoreline.

One of Leinster's big hitters on the bench, Sean Cronin broke menacingly off a maul to send Baird over for an unconverted 56th-minute try.

A subsequent Leinster score, inspired by O'Brien and finished off by replacement David Hawkshaw, was disallowed for obstruction by Andrew Smith. 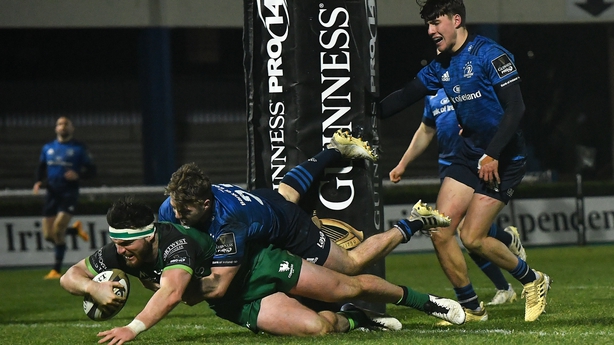 Daly, a real powerhouse in midfield for the victors, swooped on a Hawkshaw pass and fended off Smith to claim Connacht's bonus-point try, converted by Carty.

It sealed their first ever RDS victory, with Leinster's only consolation being replacement Byrne's close-range seven-pointer right at the death.