Andy Farrell says he was pleased with how the players reacted to falling behind early against Scotland in Ireland's Autumn Nations Cup victory.

The hosts were on top in the opening exchanges but failed to capitalise and found themselves 6-0 and 9-3 down and many of the faults and the subsequent drop in confidence that had been spoken about throughout the campaign threatened to engulf the team.

However, from the 32nd minute they replied with 19 unanswered points and sealed the result in the process.

"It was [pleasing] actually and that's a big part of the game nowadays," Farrell said of the players’ resolve in the 31-16 win.

"The game is so pressured in many different areas that how you adapt to things not going perfectly well is a big part of the modern-day game.

"Set-piece is so pressured across the board, defences are so vigorous now and competition at the breakdown now is so tough that there are plenty of periods in all games that don't go your way.

"How you deal with those situations is crucial and it's a big part of the game." 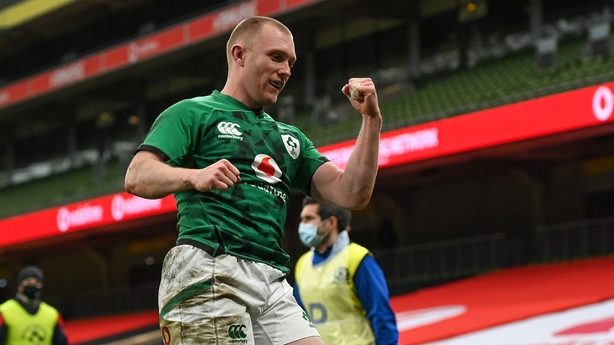 Keith Earls - who scored his 31st and 32nd international tries, pulling clear of Tommy Bowe on the list of Irish try-scorers - also alluded to the reaction of the team when things were going wrong.

"Johnny [Sexton] pulled us in while they taking their two shots at goal," said the 33-year-old Munster wing.

"We had a couple of fix-ups, fell off a few tackles. We didn't go hunting them down, we let them run at us and get momentum.

"We pulled our finger out, thankfully."

Man of the match Caelan Doris and captain Johnny Sexton speak to Clare MacNamara, with captain Sexton once more insisting the team is in better shape than the media suggest #rterugby #irevsco pic.twitter.com/D6IOHAVDNg

Man of the match Caelan Doris was able to elaborate on the issues that allowed Scotland to get ahead.

"Our hold-fold decisions were probably a little bit off and they picked us off in those holes and around the edges where we got a bit narrow so it was just one or two technical things and I think we fixed them pretty well in the second half," he said.

"It was just simple messages coming from the leaders, Johnny, Pete, James Ryan [about] getting our spacing right, we were probably following the ball a bit too much."

Farrell ends his first year in charge with a record of six wins and three losses, two to England and one against France, all coming away from home. 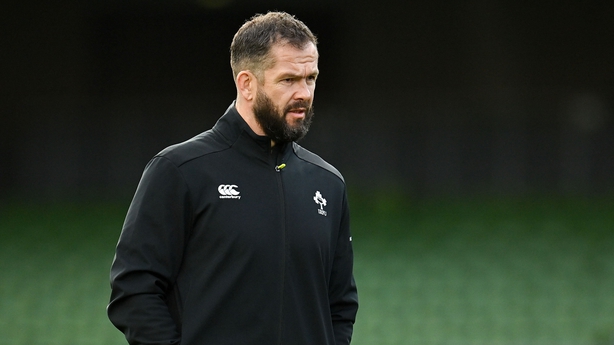 "A work in progress, as I suppose it should always be," was his summation of the last 12 months.

"It’s well documented about the number of players we’ve used and [had] a few injuries along the way, that’s influenced that but at the same time we’ve grown the group.

"We’ve had a pretty diverse group during this time as far as maturity, age-wise, regarding international rugby.

"I felt that gap has really closed and we’ve made some massive learnings from that and that sends a massive statement overall." 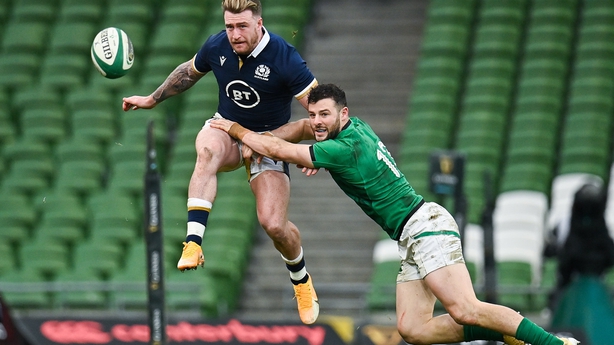 Scotland conceded 15 penalties to Ireland’s 10, and also had Dundan Taylor sent to the sinbin.

Captain Stuart Hogg was left to lament their indiscipline.

"It is hard to swallow but Ireland are a clever team and know how to put together intricate plays and they scored," said the Exeter full-back.

"I felt at half-time we were ready to win the game but our discipline let us down in the first ten minutes you can't give the Irish such field position.

"Ireland are a very clever team and they found space when we were down to 14 men.

"There are little things we can take out of our game.

"We understand we made mistakes but after every defeat we can get better. It hurts at the minute and hope we move on and will be ready for England [in the Six Nations]."