It was another mixed bag from Ireland but Andy Farrell will have been happy to sign off a positive note as a 31-16 win against Scotland secured a third-place finish in the Autumn Nations Cup.

Following a disjointed start to the game, Ireland grew into the contest and were rewarded with a Keith Earls try shortly before half-time. Further tries from Cian Healy and Earls after the break proved enough as Ireland saw out the game against a Scotland side who failed to impress.

While some players will have been disappointed with their contributions, overall there was enough there to encourage Farrell as his squad looks towards the 2021 Six Nations.

Spilled some aerial ball under little pressure and positioning could have been better at times. Couldn’t make up the ground to catch Duhan van der Merwe after the Scottish wing slipped through a gap in the Ireland line, but reminded of his attacking capabilities with a couple of snipes and a lovely kick behind for Earls.

Showed nice hands once Ireland got going and looked strong in the air but would have liked to get his running game going more. Will have been pleased to contribute with some big defensive moments. Overall it’s been a good window for the rookie and he’s looked right at home at Test level.

Brought real energy and looked one of Ireland’s brightest sparks going forward. The centre was particularly strong in the air, keeping possession from Sexton’s chip in the lead-in to Earls' first-half try, and made some big tackles.

Carried all day but it never looked like he would punch any holes in the Scottish defence. Empty stadiums remind us just how much of a leader he is in this team, as the Connacht man was noticeably vocal from start to finish.

Always looking for opportunities in attack and looked a threat throughout. Was quick off the mark to latch onto a loose ball for his first-half try and his second of the game was classic Earls, showing good pace to dive over in the corner on an afternoon where he overtook Tommy Bowe to become Ireland’s second-highest try-scorer of all time with 32. (Just the 14 to go to catch Brian O'Driscoll now.)

Will have been disappointed with a couple of missed kicks from the tee but more often than not he used the boot well and made the most of a penalty advantage with a neat chip over the top for Earls’ first try. A rock in defence too, nailing 10 tackles before a dead leg ended his afternoon with 15 minutes left to play.

Pulled the strings well and tried to mix up his approach in attack with varying degrees of success. Box-kicked to good effect, competed well in the air on a few occasions and made some important tackles.

A mixed afternoon for the veteran prop. Gave away a couple of needless first-half penalties and slipped off a few tackles, but chipped in with a trademark try to drive over from short range to hand Ireland a perfect start to the second-half.

Gifted Scotland possession with an overcooked line-out throw in his own '22 on 15 minutes and was lucky it wasn’t punished, but will be happy with his set piece work after that. However his lasting memory of this game will be getting caught out badly for Van der Merwe’s try just before the hour mark.

Grew into the game and caused Scotland problems with good line speed as visitors put some pressure on midway through the second half. Will carry all day, scrummaged well and emptied himself in a 75 minute performance.

Gave away a penalty but hit his tackles and showed some nice hands before being forced off with injury just before half-time.

Another big shift. Hasn't been in top form and wasn't the usual nuisance in open play but worked hard at the breakdown and stuck all 13 of his tackles.

Some decent carries but with little gain, making just 11 metres off 14 carries. Missed three tackles too on another unusually quiet outing.

Strong latch for Healy’s second-half try, and then showed great hands to play in Earls minutes later. Was inches away from finishing what would have been a wonderful team try late in the game, but foot was inches out of touch. Would have fully deserved it too after a performance full of intelligence and industry, including a handful of massive hits. A master at work.

Coughed up an early penalty but got through a huge amount of work. Strong and clever in possession, beating four defenders and winning good ground even when outnumbered carrying into contact. A strong end to a really promising Autumn window for the 22-year-old.

Hit his target with late line-outs.

A couple of nice carries on his international debut.

Called in earlier than expected as Henderson limped out before half-time and will be pleased with his contribution, offering a good option in the line-out.

Didn’t do anything wrong but faces a big task to get back into the back row.

Kicked the late penalties that kept Scotland out of reach. 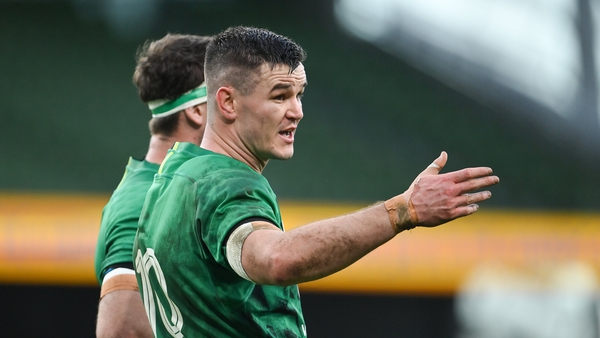