Johnny Sexton feels the media perception of Ireland's performances in 2020 differs vastly from the players' perspective.

The Ireland captain was involved for 65 mins of the Autumn Nations Cup win over Scotland before being withdrawn with a dead leg.

He contended that Ireland "rolled with the punches brilliantly" in fighting back from an early deficit to eventually win 31-16.

And he added that while Ireland are not among the leading sides in the world at present, in his view they are developing better than observers perceive.

"There's obviously a big difference in opinion between the players and the media," he told RTÉ Sport.

"We feel that we're not at the top table yet. We haven't been able to win away from home against the big teams like France and England.

"But we've won every other game. Obviously, the performances haven't been amazing for 80 minutes and last week [against Georgia] was a prime example.

Man of the match Caelan Doris and captain Johnny Sexton speak to Clare MacNamara, with captain Sexton once more insisting the team is in better shape than the media suggest #rterugby #irevsco pic.twitter.com/D6IOHAVDNg

"But we back our coaches, we think they're doing an outstanding job and it's very different from the previous regime and it takes a little bit of getting used to.

"But we've another step to go but we're happy with our progress and today, I think today showed it."

Addressing the injury that forced him off midway through the second half at the Aviva Stadium, Sexton explained that it was a dead leg rather than a recurrence of his recent hamstring issue.

"I got a dead leg in the first half and I was struggling with it," he said. 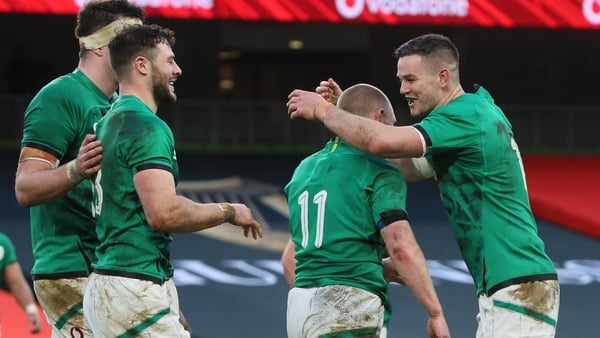