Ireland head coach Andy Farrell admits Stuart McCloskey is entitled to feel aggrieved about his lack of international action but has urged him not to be "too desperate" to impress against Georgia.

Ulster centre McCloskey is poised to make his first appearance for his country in two years after being selected to start Sunday's Autumn Nations Cup clash in Dublin.

The 28-year-old's three previous caps were spread across almost as many years following a debut against England in the 2016 Six Nations.

McCloskey has conceded he tried too hard to fit in back then and been advised by Farrell to stick to his natural game this weekend.

"He's obviously been frustrated and rightly so because he's backing himself and thinks he deserves an opportunity," said Farrell.

"We've been chatting for a long period of time now and I've asked Stuart to be patient and keep training well, which he has done throughout this campaign.

"What are we asking from him? We're asking for him to be himself and not to be too desperate.

"We're asking him to play the game in front of him - don't have too many preconceived ideas of making sure that he's able to deliver what we know that he can do."

Farrell has named an experimental line-up for the visit of the Lelos, making nine changes to the team that started last weekend's defeat to England.

McCloskey, who last featured in a win over the United States in November 2018, believes he is battling for a spot in the team's most competitive position.

Since being called up by Farrell last month, he has been overlooked for the Six Nations meetings with Italy and France, plus the Autumn Nations Cup games against Wales and Eddie Jones' men.

With Garry Ringrose and Robbie Henshaw out injured and Bundee Aki rested, he will partner Chris Farrell in the midfield at the Aviva Stadium.

"The five centres that were in (the squad) from the start, we trust them all," said Farrell.

"And you would hope you would be able to give them all opportunity at this level from time to time, but it's not always the case when you're in pressured competitions like the Six Nations.

"We're at the second last game and he gets his opportunity." 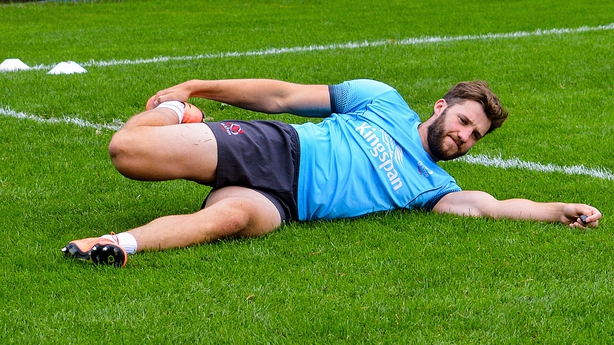 Despite the raft of changes, Ireland are heavy favourites for victory against a team which is yet to register a point in the competition.

Farrell is keen to see a reaction to the Twickenham loss.

"We're excited about this team going out and giving a performance and righting a few wrongs from last week," he said.

"The obvious ones are getting some continuity from our set-piece and making sure we play with our heads up and deliver on executing opportunities."